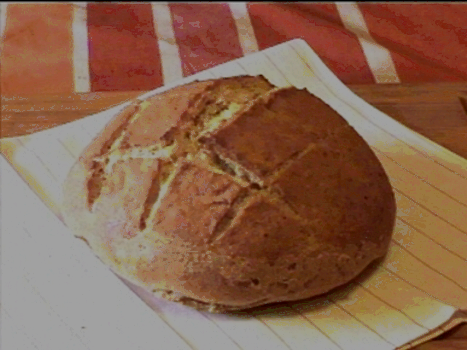 As stated in Wikipedia, sourdough is a dough containing a lactobacillus culture, usually in symbiotic combination with yeasts. It is one of two principal means of leavening in bread baking, along with the use of cultivated forms of yeast (Saccharomyces). It is of particular importance in baking rye-based breads, where yeast does not produce comparable results. In comparison with yeast-based breads, it produces a distinctively tangy or sour taste, due mainly to the lactic acid produced by the lactobacilli; the actual medium, known as “starter” or levain, is essentially an ancestral form of pre-ferment. In English-speaking countries, where wheat-based breads predominate, sourdough is no longer the standard method for bread leavening. It was gradually replaced, first by the use of barm from beer making, then, after the confirmation of germ theory by Louis Pasteur, by cultured yeasts. However, some form of natural leaven is still used by many specialty bakeries. There may be different scientific definitions of sourdough but it is basically dough leavened by microscopic organisms or basically letting yeast grow.

For starter, you have to have a mixture of flour and water that will serve as a medium for the yeast to grow. The slightly sour taste is produced by the fermentation process that results to acid and gas. It may cause bread to rise because of the “resilient structure” of the dough.

Here is a very simple recipe that you can follow to make your own sourdough:

Dissolve yeast in ½ cup of warm water. Stir in remaining water, flour and sugar. Beat until smooth. Cover with cheesecloth and let it stand at room temperature for 5 days, stirring 2-3 times daily. Starter should have a yeasty, sourdough smell. Place in covered container and refrigerate until it is ready to use. To keep the starter going, add to the starter equal parts of flour and water and a pinch of sugar. Then let stand at room temperature until bubbly or well fermented.

There are some people who think that sourdough is actually sour. The sourdough need not to taste sour. It is just the millions of bacteria and yeast which makes the dough extra flavorful and extra tasty. In fact, a lot of selection is not even close to the sourness that we all expect. Just remember that the sourdough is like a barrier to our bread. It becomes its preservative.

Gary House is the founder of Central California Dutch Oven Adventures and the host of Cooking-Outdoors.com who loves cooking outdoors with his Dutch oven for many years now. He has fun looking for innovative ways of outdoor cooking in what he calls “his adventures” and would love to share these adventures with everyone. For more information on product reviews, outdoor cooking recipes and techniques, please visit our website at: http://www.cooking-outdoors.com