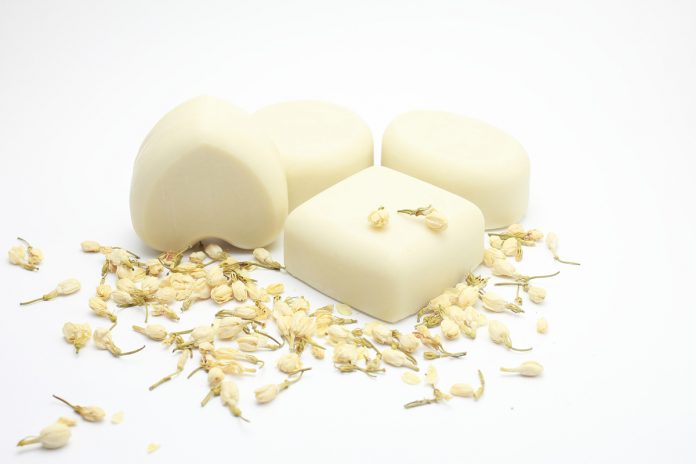 I learned to make homemade soap from my grandmother who is now 97-years-old. Way back when I was a young girl this was a monthly process I helped with.

Grandma would ask her friends from church, the quilting bee and Elks Lodge to save all their grease drippings for her to make soap with.

On soap making day, she would bring out the enamel tubs, the coffee cans of grease drippings and her soap making utensils that consisted of cheese cloth, wooden spoons, measuring cups, and a scale and hand mixer.

Grandma would heat the grease drippings each can at a time and when melted strain through the cheese cloth several times until the grease was as clear and pure as water. Of course being grease it had a golden tint to it, but you could see to the bottom of the tub. When she had heated and strained all the grease she set the tubs aside and mixed her lye water.

Oh the fumes of the lye water would make you cough until the lye was dissolved completely and set aside to cool. Lye water can get up to 200 degrees when first mixed, which makes it a chemical to respect. You can burn your skin if you are not careful, but just little drops can be washed off with cold water without leaving any lasting burn.

When the lye water and oils cooled to about the same temperatures, she would very slowly mix the two together in her enamel tub. She’s stir and stir until she knew the two were mixed real well and then she would get her hand mixer and start mixing on the slowest speed possible. She would turn off the mixer and let the soap rest and her arm too, then turn it back on to continue mixing.

Meanwhile I laid the molds out (small butter tubs) in rows to be ready when the soap had reached the right consistency, which was like thin pudding. The term is called tracing. To me it was pure fun and sometimes grandma would add little amounts of Lavender oil to the soap to make it smell nice.

When the soap traced grandma would pour soap into the molds and it was my responsibility to make sure they did not tip over while she was filling them. After the soap set for a couple days in the molds, I’d pop them out and into a large trash bag to cure. Soap has to cure approximately two to three weeks before you can use it. Another word for curing is saphonation, the process of the oils and lye water turning into soap.

Grandma would make soap throughout the year, but every six months or so she and grandpa would load up the soap and other items they had collected and take them to the Indian reservations in Arizona to hand out to the Indians with the other Elks Lodge members.

Five years ago, I started the tradition of making homemade soap, but I have expanded to several types of soap and where grandma used grease drippings such as lard or tallow, I use vegetable oils of several types.

My favorite soap to make is goat’s milk and honey. Thank goodness for the Internet, so many recipes and directions to choose from. The first try at making goat’s milk and honey soap was mixing the goat’s milk and lye together as grandma used to mix water and lye together. It bubbled up and turned a pumpkin colored orange. I thought “Oh, my goodness, this is going to explode”, and backed up a few steps. But it finally settled down. The one thing I didn’t like about mixing the lye and milk was that the milk curdled.

The recipe said it would because the lye made the goat’s milk heat up to just less than 200 degrees. While the milk and lye was cooling down I began to get my oils together. Again grandma used the grease that her friends had given her; I was using a combination of oils purchased from a supplier of vegetable oils.

I have an old scale that was used in a market to weigh my ingredients on and since I weigh my ingredients in pounds this scale works for me. I put my big stainless steel stock pot onto the scale and measured the palm oil, then added the olive oil, rice bran oil and last the coconut oil. It takes quite a bit of oil to make a batch of soap, and I was making a 30 bar batch so that was roughly 6 lbs of oil.

Why the different kinds of oils? Well each oil has different qualities, which mixed together make a very moisturizing bar of soap. Palm oil is usually a solid oil and gives texture to the bar along with a mild lather; rice bran is similar to olive oil, very moisturizing and thick, but less expensive; olive oil for the reason already mentioned and coconut oil, which creates loads of lather. Coconut oil by itself can be very drying to the skin, so it needs to be combined with other oils. I also use Shea and mango butters, jojoba and sweet almond oils in some of my soaps.

When the lye/milk and oils cooled to around 110 I then very slowly poured the lye/milk into the oils while stirring. After the two had been mixed real well I poured the mixture into my stand mixer and turned it on to “stir”, which provided the right speed and saved my arm from falling off. I also added about 2 tablespoons of honey while the mixer was stirring. After a couple minutes I started adding the fragrance or essence oils a little at a time until the correct amount had been added, usually about 4 ounces. When the mixture “traced” I then poured it into my prepared mold.

My husband makes the molds from wood and I line them with wax paper before pouring the soap mixture into them. The soap in the mold sets for approximately 24 hours and then can be turned out and cut into bars by my soap cutter that my husband also made for me. Any soap that has milk in it should cure from 3 to 4 weeks before using.

After it is cured the soap goes into the correct storage container.

After making goat’s milk and honey by this recipe and having some problems such as the soap forming honeycomb like places throughout or the oils were separating in puddles on top of the soap, I started using another method of making it. I now place the goat’s milk into the freezer to get “slushy” and then add my lye to about 1 pound of water to dissolve and adding the goat’s milk to the mixture after I have mixed the lye/water and oils. Since I changed the method of making my goat’s milk soap I have not had any batches that I have had to “rebatch”.

Rebatch simply means cutting or grating up the soap, mixing with a small amount of liquid and melting down to a thick liquid form. I use a Crock pot for this. I then pour the melted soap back into the molds and let it sit until hardened. Since the mixture has been heated enough to melt, it has already completed the “curing” stage and can be used within a couple days instead of waiting 3-4 weeks. This can be compared to hot press soap instead of cold press soap, which I normally make.

I hope you like this article and have learned a little about making goat’s milk soap.

Loyce Henderson and husband live in Captain Cook, HI where I own a small business which specializes in handcrafted items. Some items I make and some from local artisans. We have two dogs, two African Gray parrots and one Rose Breasted Cockatoo. I have been making soap since a child living with my grandmother and owned a small business, Grandma and Me Soaps, for many years out of Zephyrhills, Florida.