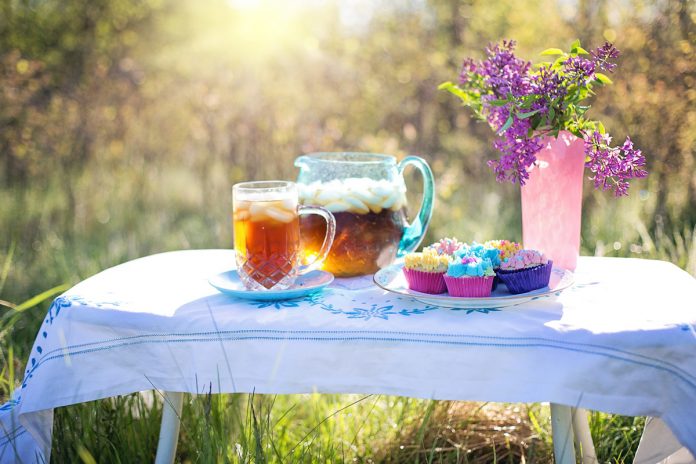 Iced tea is a popular drink in the United States, and is becoming more popular in other countries, though it will probably never reach the level of consumption by Americans. Surveys have shown that around 2.2 billion gallons of tea are consumed in the USA every year, and at least 85 percent of the total is iced. With a host of choices for their iced drinks, such as powdered, canned, and bottled for a quick pick me up, and the traditional brewed drink using either bags or loose leaves, people in the United States have proven their love for this delicious beverage.

For many years, it was believed that iced tea was first introduced at the St. Louis World’s Fair in 1904. A man by the name of Richard Blechynden, who was the Commissioner of Tea for India, was also the director of the East Indian Pavilion at the fair. Mr. Blechynden had prepared samples of hot tea for fairgoers, and noticed that no one was taking advantage of them, as it was an unseasonably hot day and everyone was going for the coldest beverages they could find. He had the idea of icing down his hot mixture, and presented it to the public that way. The crowds loved it, and word spread of this delicious way to enjoy a healthy drink. Mr. Blechynden did not invent the iced version, but made it more popular with Americans.

This was not, however, the first time that the iced drink had been available in the United States. Rewind to the 1800s. Cookbooks from that era prove that the iced drink was popular served in punches and made with green leaves – not black leaves. Sugar and quite a bit of liquor were added to these, and they were given interesting names in line with the times. The popularity of these punches continued into the mid 19th century, and the names given to them begin to be regional and also patriotic in meaning.

The 18th century also saw the start of refrigeration as we know it today. First there was the ice house. Then came the ice box, the first refrigerator, which was patented in 1830. Slabs of ice kept the contents cold, and were delivered several times a week by an ice man. Ice tea became even more popular as the availability of ice and a form of refrigeration became available to all. “Tea Punch” was still popular for parties and gatherings, made now with black leaves and green leaves, white sugar, heavy cream, and either claret or champagne, and usually served cold.

In a Southern cookbook published in 1879, a recipe for the iced drink appears, and it is prepared in a way that is similar to the way many people prepare it today, except the sugar is not added while the mixture is hot from brewing, the time when it dissolves best. Other recipes from 1884 and 1890 make it plain that people had been enjoying the iced drink before 1890. Lemon was, and still is, hugely popular in the iced mixture.

In fact, lemon has been used in iced tea from the first glass of it served in this country! What we know today as “refrigerator tea” was known as “refrigerator tea” when it came into popularity around 1890. In 1893, the Chicago World’s Fair sold the iced variety and also lemonade. Business was brisk, as more than $2000 was earned from the sales.

In 1904, the World’s Fair was held in St. Louis. For a long time, historians thought that iced tea was invented at this fair, but further investigation in later years proved them wrong. The fair did make the iced drink more popular, as the crowds thoroughly enjoyed their free samples served by Richard Blechynden, and it is felt that fair goers went back to their homes and spread the word about how delicious and refreshing the iced tea at the fair had been. Since people from all over the country attended the fair, word traveled to both coasts and everywhere in between, for after 1904, the popularity of iced tea grew. By the time World War 1 became a reality, people were purchasing special tall glasses known as “iced tea” glasses, long spoons for stirring, and lemon forks.

During Prohibition, iced tea became even more popular as people had no choice but to locate alternative beverages to the beer, wine, and alcohol they had consumed. A recipe published in yet another Southern cookbook contained the recipe for iced tea that was used in the South for decades, and is still in use in some Southern kitchens today.

The bag was also invented in 1904. A merchant from Boston sent samples to his customers in little silk bags. When he discovered that people were brewing the leaves without removing them from the bags in order not to have to deal with the loose tea leaves, the bag as we know it today was born.

At the time of World War 2, Americans had no way to obtain green tea, as the usual sources had been banned from dealing with the United States. All leaves had to come from India, and they were black. When the war ended, the people of America were drinking almost 99% black, and that trend stayed the same until recently, when green came into vogue once more.

With a host of choices for their iced drinks, such as powdered, canned, and bottled for a quick pick me up, and the traditional brewed drink using either bags or loose leaves, people in the United States have proven their love for this delicious beverage.

It has been estimated that fully 60% of all the tea drunk in America is consumed in the South, and about 90 percent of that is iced. In fact, iced tea is so beloved in the South that it has been fondly dubbed the “House Wine of the South”. Southerners believe in sweetening their drink heavily, and the habit has spread to other parts of the country, where this concoction is known simply as “Sweet Tea”. Lemon and mint, as well as whiskey, are popular additions to Southern style iced.

Iced tea has become popular in recent years as a mixed drink called an “Arnold Palmer” or a “Half and Half”. This consists of half sweetened iced tea and half lemonade, which makes for an even sweeter drink than usual, but with a small note of sourness as well. A half and half can also be half unsweetened and half sweetened tea, which cuts the super sweet taste of most Southern drinks. In the Southeast, this is commonly called a “Chris Rock” as this comedian came from South Carolina.

Bags are still a popular means of brewing iced tea, mostly for the convenience factor and the low price. More and more, people are turning to loose leaves however for preparing their iced tea because of the wide range of flavors, and the fact that brews from loose leaves has a fuller, richer flavor, and is usually a higher quality as well.

No matter how it is prepared, iced tea is here to stay!