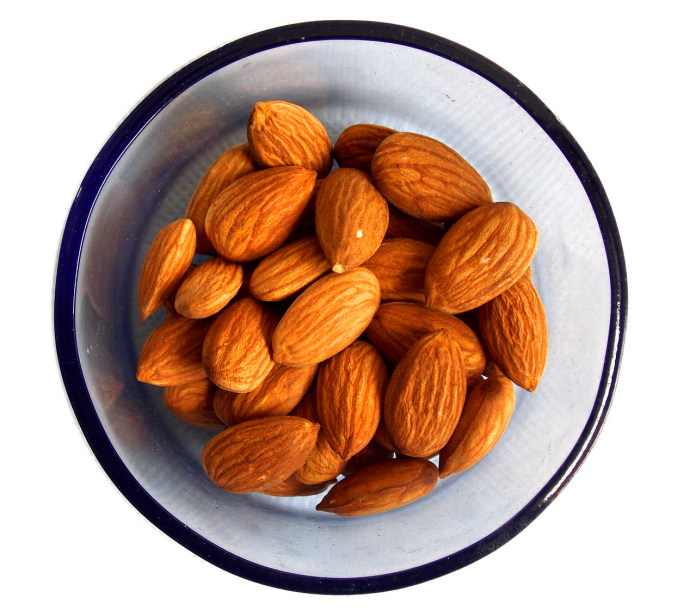 They are a sweet, tasty addition to your diet and the health benefits of almonds are legion. They grow on a tree which is native to the Middle East and South Asia. It is similar to the peach tree. The nut has a corrugated shell around the seed. Almonds are not true nuts, but drupes. A drupe is a fruit in which the outer part (flesh) surrounds a shell (pit or stone). In the almond, the outer flesh is somewhat leathery, and called a hull. Almonds are sold shelled (with the shells removed), or unshelled (with the shells attached). They are also available blanched, which means they have been treated with hot water to soften the seed. The seed coat is then removed to reveal the white embryo.

The tree itself is a deciduous tree which grows up to about 33 feet tall, and a little under a foot in diameter. The tree is green at first, become purple when exposed to sunlight and by its second year, the wood has taken on a gray coloring. The leaves are up to 5 inches long, serrated, and the flowers are white or pale pink, with five petals. The trees produce viable almonds in their third year after being planted. A tree is mature after five or six years, and the fruit comes mature in autumn, about 7 or 8 months after flowering.

The almond was spread along the shores of the Mediterranean in ancient times, into northern Africa and southern Europe, and more recently into California, in the United States. It is thought that almonds were first cultivated in the Levant region (Syria, Lebanon, Israel, Jordan and the West Bank). The fruit of the wild almond contains amygdalin, which, when the seed is crushed, chewed or otherwise injured, becomes prussic acid (hydrogen cyanide).

Domesticated almonds are not toxic. It is possible that almonds were one of the earliest domesticated fruit trees, because the grower was able to raise attractive fruits from seed. This gave almonds the ability to be propagated from seed, in a time before grafting was not known or well-practiced.

Almonds are widely grown, with a peak of production in 2002 of 1.85 million tonnes; and a low in 1995 of 1.7 million tonnes, according to Food and Agriculture Organization (FAO) figures. Major producers of almonds include the United States, Spain, Syria, Italy, Iran and Morocco. In Spain, other varieties of almonds such as the Jordan almond and the Valencia almond are also produced.

Almonds are widely used in cooking. They are used raw and toasted. The are available whole, sliced (slivered or flaked), and as almond butter, almond paste, almond milk and almond oil. They can be sprinkled over desserts, used in pastries, cookies, cakes, and other dishes. Green almonds (young developing fruit) can be eaten while still green. In the Middle East, this is a common snack, and the almonds are dipped in salt to balance out the sour taste. They can be pickled or put in brine to extend the fruit’s shelf life.

In China, they are mixed with milk and served hot. Ground blanched almonds are used in Greece as a base material in a variety of desserts. They are considered “wedding treats” because of the white color. Also, a soft drink known as soumada is made from almonds. In Italy, they are used to make almond macaroons. Whole fried almonds are used in Morocco to make sweet tajine, a type of stew. In India, almonds are used to make some curries. Almonds can be processed into a milk substitute. This is a viable option for lactose-intolerant people and vegans.

Almonds are rich in vitamin E (26 mg per 100g). Vitamin E assists in the formation of muscles, red blood cells, and tissues. It also prevents the oxidation of fats and vitamin A. It can help to delay coronary heart disease. Almonds also are a good source of dietary fiber, B vitamins, calcium, iron, magnesium, phosphorus, potassium and zinc. Dietary fiber can help reduce appetite by increasing food volume without increasing calories. It helps to maintain a steady blood sugar level by absorbing water during digestion, slowing the emptying of the stomach and delaying adsorption of glucose. This is one of the key health benefits of almonds.

B vitamins are very helpful to the body. They help convert food into energy, they also assist with forming healthy red blood cells, and the reduce the risk of heart disease. They can reduce PMS symptoms and anemia, and they have been known to minimize depression. They can also prevent birth defects. Calcium is good for your bones, and iron carries oxygen to the blood cells. Magnesium may reverse osteoporosis. It can also prevent heart disease, regulate high blood pressure, and treat migraines, insomnia and depression.

Phosphorus is necessary for strong bones and skeletal structure, teeth, and healthy gums. It helps with growth and body repair, heart health, arthritis, cell health and cancer prevention. Potassium is helpful in preventing strokes, keeping blood sugar levels steady, preventing muscle cramps, aiding with memory and learning, balancing blood pressure and water levels, and acting as an electrolyte by regulating levels of fluids in the body. It is also considered a great stress buster. Zinc also aids with muscle health and growth. It helps to maintain strong, healthy bones and cells. It keeps hair and nails healthy, and is necessary in children for proper, healthy growth.

In spite of their high fat content, some medical studies show that using them in a daily diet may lower several factors associated with heart disease, including cholesterol and blood lipids. Despite the positive health benefits of almonds, they may cause an allergic reaction in some people. Symptoms can range from local (oral allergies) to systemic (anaphylaxis), so use care if you’re not sure if you are allergic.

Around the world, almonds are used in many forms in many different types of savoury and sweet dishes, but they all let you enjoy the health benefits of almonds and have a positive effect on many aspects of well being.