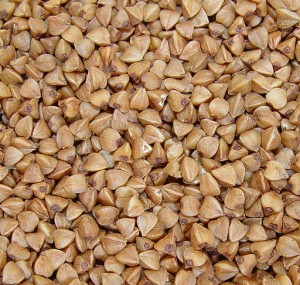 Most of us eat the same grains over and over again: pasta, rice, and wheat. How about trying a new whole grain in place of one of your old standbys? One whole grain that we think is really worth a try is buckwheat. Japan, China and Korea have been cultivating buckwheat for over 1,000 years and a favorite food item soba noodles made with buckwheat has become very popular in the United States.

Buckwheat flour is commonly added to commercial pancake mix and this is how most people even know of its existence. However, buckwheat is much more than just an addition to a breakfast pancakes. In its lesser known forms, there are many health and nutritional benefits that could make buckwheat a wonderful addition to a “whole foods” diet. Contrary to its name, buckwheat is not a form of wheat at all.

Whole buckwheat is a very nutritious food. The protein in buckwheat contains the eight essential amino acids. Buckwheat is also rich in many B vitamins as well as phosphorus, magnesium, iron, zinc, copper and manganese, and has Alpha-Linolenic Acid, which is one of the two essential fatty acids we must have in our diets.

In addition to its nutritional value, there are a few health benefits that make this food worth your consideration:

* Buckwheat is a high fiber food. 1 cup of cooked buckwheat groats contains over 4 grams of dietary fiber.
* Because it is high in fiber and has a low glycemic load, and is a good carbohydrate choice for people with diabetes.
* Many grains lack protein but buckwheat has more than corn, wheat or rice.
* Diets that contain buckwheat have been linked to lowered risk of developing high cholesterol and high blood pressure.
* Buckwheat is is a gluten-free alternative to grains, which makes it a healthful grain alternative for people with celiac disease or wheat sensitivity.

Buckwheat Groats: hulled grains of buckwheat, triangular in shape and resembles other grains. The seeds from buckwheat can be used to make flour after being removed from the husk.

Buckwheat Kasha: kasha, or roasted hulled buckwheat kernels, may be sold whole or cracked. You may find it ground into coarse, medium, or fine consistencies. The variety you use will depend on the consistency you need for the dish you are preparing. Buckwheat groats and the roasted version, kasha are usually cooked in a manner similar to cooking rice. Either can be used to make hot cereal, added to soups or casseroles, or used as a side dish.

You can find an abundance of recipes in cookbooks and on the internet that include buckwheat so now is the time for you to start adding it to your diet!

Gretchen Scalpi is a Registered Dietitian, Certified Diabetes Educator and Certified Wellcoach®. She is the author of “The EVERYTHING Guide to Managing and Reversing Pre-Diabetes 2nd Ed.”, “The EVERYTHING Diabetes Cookbook 2nd Ed.”, “Virtual Grocery Store Tour: Getting The Most Nutrition Out Of Your Food Shopping”, “Pre-Diabetes: Your Second Chance At Health”, “The Quick Start Guide to Healthy Eating”, “The Quick Start Guide To Pre-Diabetes” and “Quick Start Recipes For Healthy Meals”. Read her articles, recipes and blog at http://www.nutritionxpert.com and learn more about her books at http://www.gretchenscalpi.com.