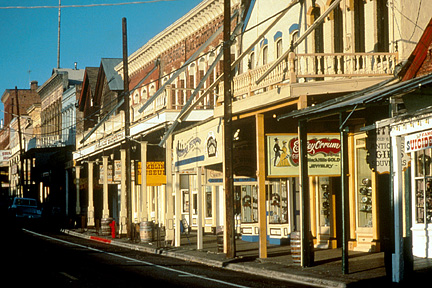 Declared a National Historic Landmark in 1961, Virginia City is one of the oldest establishments in Nevada. In 1859, the Comstock Lode silver strike resulted in Virginia City becoming a mining boomtown that eventually grew into a thriving metropolis. By the end of the nineteenth century, much of the mining was disbanded and the population quickly declined, causing the town’s prosperity to abate and destined the flourishing city to become a mining ghost town. Although its boom days are over, the historical town remains as it was in its original state during the peak mining days of the 1870’s. With its authentic preservation and enriching history, Virginia City is presently a tourist attraction that draws over two million visitors each year.

Although the Grosh brothers and Henry Comstock all had a stake in the claim, credit for the discovery at Gold Canyon is disputed, and legend has it that James Fennimore, also known as James “Old Virginny” Finney, was the discoverer of the Comstock Lode silver strike of 1859, which was the first significant United States unearthing of silver ore. Once the gold and silver strike was made public, prospectors journeyed from far and wide to the eastern slope of Mount Davidson hastening to stake their claims. Mount Davidson is the highest peak in the Virginia Range and forms the backdrop of Virginia City.

Located along State Route 341 in northwestern Nevada, Virginia City lies east of Lake Tahoe and is in close proximity to Carson City, Nevada’s state capitol. At one time, the population of the city increased to as many as 30,000 people, including the small surrounding towns of Gold Hill and Silver City. This growth occurred during the height of the “Big Bonanza”, the Mother Lode of the 1870’s when millions of dollars of gold and silver ore were being extracted from mine shafts at depths exceeding 3,000 feet.

In 1875, much of Virginia City was destroyed by the “Great Fire”. However, because of the affluence of the mining industry, the town was quickly rebuilt in approximately eighteen months, and the hotels, opera houses, banks and other merchant businesses were once again restored and put back in operation.

Instant wealth was acquired for many inhabitants during the boisterous gold and silver mining times of the town, but when the Comstock Lode epoch dissipated at the latter part of the nineteenth century, the population declined sharply, indicating the boom age of the once prosperous town had come to an end. By the mid 1950’s, Virginia City’s population had fallen to approximately 500 people.

Presently, the population has risen to about 1200 people, and although the mining activity is minimal, the economic base of this historic town has shifted to tourism, bolstering over two million visitors each year. The preservation of the buildings and artifacts provide visitors with an unadulterated Victorian-era experience, and with today’s overwhelming tourist interest, it has enabled Virginia City to thrive again as it once did in the explosive days of the 1800’s.

Because of the great prosperity that was obtained during the bustling years of the Comstock Lode silver strike, Virginia City was called “The Richest Place on Earth”. Although the presence of gold and silver has diminished in the hills of this famous ghost town, Virginia City still remains rich in history and folklore. The present-day historic saloons, underground mines, regal mansions and cemeteries all offer a glimpse of the town’s momentous past. With such renown and magnetism, this historic landmark lures visitors unlike any other, exemplifying that Virginia City has rightly earned its place in history.

Similar to the historic town of Virginia City, illustrious Lake Tahoe has its own enriching history and is only a short 45 minute drive from this historic ghost town. See the sights of this beautiful alpine lake and its fantastic [http://laketahoeweddinginfo.com/wedding-locations/emerald-bay]wedding venues like Emerald Bay located in the elevated heights of the Sierra Nevada Mountains in Lake Tahoe.