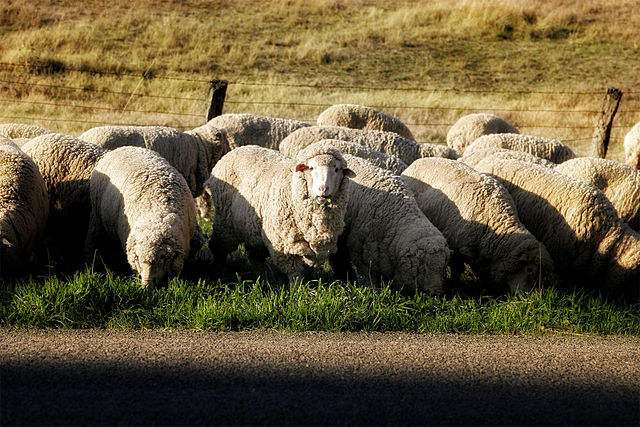 So you’ve decided to raise sheep for their produce such as for meat or their wool. Part of having a good livestock produce is by keeping your sheep healthy and well fed. So what do sheep eat?

Generally sheep are grazers and prefer to eat grass, clover and weeds. But they also eat a variety of plants that other livestock may refuse and would even eat plants you don’t want to eat like leaves from your vegetable plot. Sheep should least eat around two percent of its body weight per day. However, pregnant ewes should be given a litter more than this. Protein requirement is only about 8 to 10% of its diet.

What Do Sheep Eat During Winter or Dry Season?

Sheep that are kept in farm land are usually fed from pastures. A pasture is vegetation-covered plot of land that is used for grazing by farm and ranch animals such as horses, cattle and sheep. During the seasons when grass is unavailable for pasture grazing or is insufficient in supply, feeding grass hay is enough to maintain the food requirements of mature sheep. Hay is cut and dried forage and has many variations in species but is usually differentiated by their maturity when they are harvested.

When Should Grain Be Fed to Sheep?

Feeding grain to a mature sheep should be done gradually and in controlled amounts. Too much grain intake in its diet can cause your sheep to develop heath problems such as over eating and urinary calculi. Feeding grain to sheep is like feeding kids candy; they are addicting and cause obesity in sheep. Grain should only be fed to sheep occasionally and as special treats or when they still lambs.

What Should You Know When Choosing Feeds for Sheep?

What Do Sheep Eat When They Are Young Lambs?

More nutritional variation of feeds and grains are added to the regular diet of sheep during its first 12 months. It is also okay to add grain to a lamb’s diet. This will help improve their potential for growth.

What Do Sheep Eat When They Are Pregnant?

Avoid feeding ewes you plan to breed clovers, alfalfa and birdsfoot trefoil because it may delay estrus, which is equivalent to the menstrual cycle of humans. The amount of food given to a pregnant ewe should also vary to maximize egg production and size of its offspring. For example it is best for ewes to gain weight during the first two weeks and last week of its pregnancy to achieve this goal.

Are you looking for more tips on raising sheep and what do sheep eat? Separate yourself from the usual sheep owners who are prone to common mistakes. If you would like to learn more tips on caring for sheep and how to raise sheep correctly, click here: