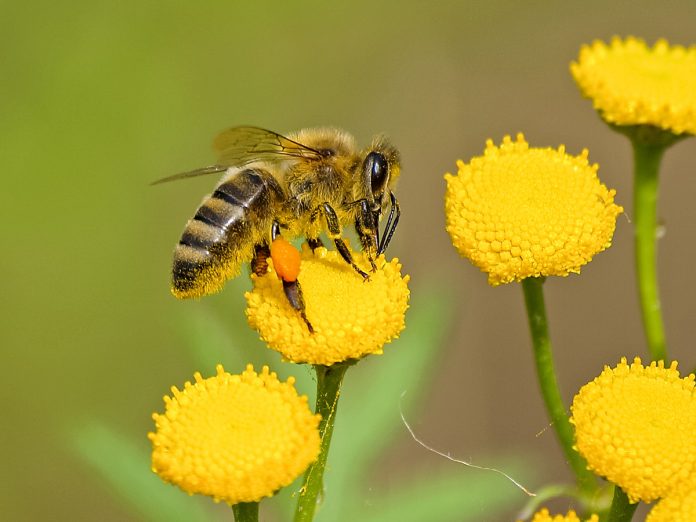 We can learn many things by observing the behavior of honeybees. Here are ten examples of lessons we could usefully apply to our own lives.

1) Honeybees live within their means.

There are no banks, loans or credit cards in the bees’ world; only the resources they themselves gather and store. Like us, bees need to eat every day, and they do everything in their power to ensure a constant food supply by storing it – not so much for themselves, but for bees yet to be born.

Fifty thousand workers can shift a lot of stuff. Co-operation is the key to their success: tens of thousands of individuals behaving as a single organism.

3) Honeybees demonstrate that division of labor can be highly efficient.

And everyone knowing how to do the full range of essential jobs makes for flexibility and adaptability. Bees move through a series of jobs in the hive before finally emerging as food-gatherers. In an emergency, they can revert to their former occupations to make up for losses.

Bees are opportunists, taking advantage of available food as soon as conditions are right. Even when their stores seem full, they will find odd corners to pack with food.

5) Honeybees behave as though individuals matter, while the common good is always their first priority.

Ego is not a feature of honeybees: their first duty is to the colony and bees will sacrifice themselves without hesitation if they perceive a threat to the colony.

6) Honeybees understand that hard times happen, and they are always prepared for shortages as well as disasters.

7) Honeybees share: they know there is plenty for everyone, including other species.

Honeybees do not compete head-on with other species: there is overlap in their food sources, but they do not need to drive others from their territory.

8) Honeybees adapt to their surroundings.

They know that this is the only effective survival strategy. This extends even to their use of propolis, which varies according to local conditions, and can protect them against localized pathogens.

9) Honeybees understand that honest communication is at the heart of community.

Bees are great communicators, using vibrations and pheromones to pass complex messages around their colony. As far as we know, they are incapable of telling anything but the truth as they understand it.

Because we have assumed control of much of the available land for our own purposes, we are responsible for ensuring that they continue to have access to flowers untainted by toxic chemicals to which they have no defense.

For almost all of the last 80 million years or so, bees have had flowering plants to themselves. Only in the last 100 years has their natural diet been contaminated with substances they can never before have encountered: man-made chemicals designed to poison them and their kind, some of them cunningly incorporated into the very bodies of the plants they feed on. More and more of these toxins are being spread on crops and on the soil, and the bees have no chance of surviving their onslaught.

We must reform our farming methods. The alternative is a world controlled by corporations, intent on bringing the food chain completely under their control.

The elimination of ‘nuisance species’ is already underway by those who stand to profit from GM crops. To those who stand to make billions of dollars from maize, wheat, rice and cotton, the honeybees are irrelevant. They simply don’t care if they disappear: they have no use for them, as all the crops that grow from the GM seeds they sell are wind-pollinated.

Ironically, some of these very same corporations are already making profits from breeding and selling other bee species – such as mason bees and bumblebees – to those whose crops do require pollination. Because these bees need to be bred in quantity and renewed every year, they have found a way to commercially benefit from the developing situation that must raise questions about their involvement in the demise of the honeybee.

Have they, in fact, deliberately poisoned the honeybee in order to exploit the resulting gap in the market?

Author of The Barefoot Beekeeper.