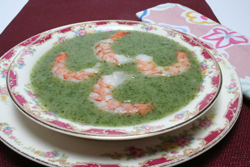 In classic French cooking, the kind Julia Child taught us to make during the 1960s, cream was not simply an ingredient. The more of it used the better. It was lavish amounts of cream, for example, that turned rustic and hearty leek and potato soup into vichyssoise, an elegant dish for sophisticated gourmets.

When I was a teenager and went with my parents to French restaurants, ordering vichyssoise made me feel very grown up. I should add that leeks were still so unfamiliar that they, too, were considered a gourmet ingredient. While I liked the flavor of the leeks, I did not enjoy the coating that the cream left in my mouth.

Ironically, around the time Julia became a culinary star, health experts began educating us about the unhealthy effects of saturated fat in foods like dairy products. Fortunately, top chefs, including Julia, took up the challenge of making food that is both good for us and is as pleasing as classical cooking, without using cream and butter. Frequently, they did this by using rich broths and vegetable purees instead.

In later books, Julia eliminated the cup of cream from her original vichyssoise recipe. She substituted an extra pureed potato, which supplied all the creaminess required. Later versions of the vichyssoise recipe call for just a dollop of sour cream as well, but only as an optional garnish.

When I tried this leaner way of cooking, I loved that it also made it possible to taste more of the vegetables’ flavor. See for yourself in this Potato and Watercress Soup with Shrimp, a very contemporary successor to potage au cresson, a traditional variation on vichyssoise.

The chicken broth is an important part of this soup’s flavor. Brands labeled “reduced sodium” generally contain other ingredients that offer flavor without relying on excess sodium, which has contributed to the problem of hypertension for so many Americans. Serve this soup well chilled on hot summer days and hot on cool evenings.

Potato and Watercress Soup with Shrimp

In a large, heavy pan, heat the olive oil over medium-high heat. Stir in the onion and sauté about 4 to 5 minutes, until translucent. Do not let the onion turn brown.

In a blender or food processor, purée the soup in batches until it is creamy and smooth. Season the soup to taste with salt and pepper.

Return to pot and reheat. Ladle the soup into individual bowls. Arrange 4 shrimp halves on top of each bowl and serve. The soup can also be served cold after chilling in the refrigerator in a covered container at least 4 hours and up to 2 days. If served cold, let soup stand at room temperature until just slightly chilled, about 30 minutes, which will release the flavors. (Very cold temperatures mask the flavors of soups and makes them taste bland.)