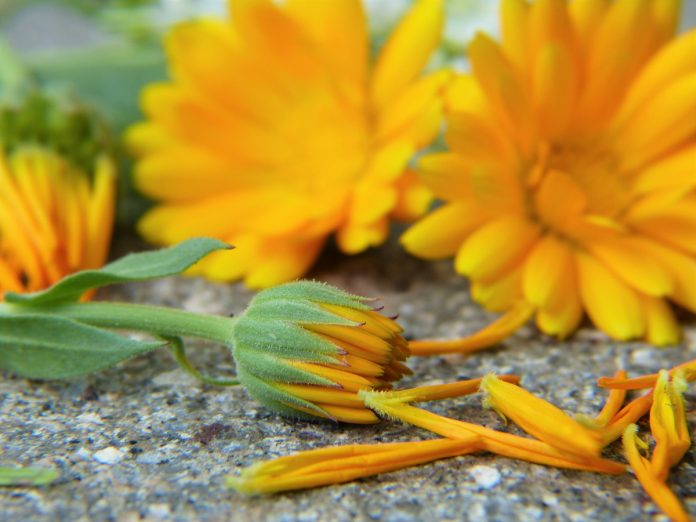 Who would have thought of such a crazy idea; eating Daylilies? Earliest written records of edible flowers being consumed date back to 140 BC., although, the oldest Chinese book about herbs the ‘Shen Nong Ben Cao’ dates back to 2700 BC (…and I bet they munched on a few petals back then too). Flowers and herbs have been eaten for their nutritional benefits and used medicinally throughout early history, in practically every civilization, on every continent, and trading like money! Favored for adding floral notes to dishes and loved for their beauty but usually pulling double duty medicinally. So how did we go from eating pretty flowers to putting them on tables? Here in America we have a habit of forgetting stories handed down to us from our grandmas or missing out on them altogether. One of my friends mentioned the other day, that his grandson asked him what a record album was? Life has a way of getting easier but memories and heritage are sometimes lost or forgotten. I remember my Dad telling us stories of getting slapped for drinking the cream off the top of the milk. Will my granddaughter know this story?

Why did flowers go from the plate to the vase? I recently listened to a lecturer, Rosalind Creasy, speak. She said that during the 17th century, it became vogue, to be able to say “hey, look at me! I have enough money that I don’t need to grow food! I can afford to grow plants I don’t have to eat! This was the beginning of the down fall of the lusty American gardener! It became a social status symbol. Now some don’t even know how to plant a seed and now we really need to. Edible gardening does seem to be making a comeback though; Ms Creasy mentioned all nurseries and garden centers are reporting increased sales of edible plants along with a decline in strictly ornamentals. Every Home & Garden Show this year boasts some type of edible gardening guru in attendance. Maybe there is hope for us lusty American gardeners.

Daylilies were brought to the Americas by early travelers and are native to Asia. Daylilies were loved because they transported well and grew under poor soil conditions, but more importantly, early travelers knew the entire plant was edible. Wild Daylilies brought to the Americas were orange. Modern hybridization has added thousands of species and hundreds of colors. Only Lilies from the Genus, Hemerocallis fulva are edible; that means Daylily to me and you. In Greek, ‘Hemera’ means ‘Day’ and ‘Kallos’ means ‘beauty’. Lilies such as Orientals, Asiatic, and Calla are not. Calla Lilies are actually poisonous due to the presence of calcium oxalate. All parts of the calla lily plant are toxic, and produce irritation and swelling of the mouth and throat, acute vomiting and diarrhea. I’m always amused when I see calla lilies on wedding cakes. How did we go from eating healthy flowers, to putting poisonous ones our plates? I believe if it’s on my plate or on my food, I should be able to eat it safely, not to mention, benefit from it nutritionally. Is this how our children are learning that flowers are not edible? Just pretty to look at? Maybe we need to get back to our roots (no pun intended). So let’s take a look at the Daylily and break it down.

We’re going to serve this plant from the ground up. The roots, actually tubers of the Daylily are edible along with the sprouts, buds and blooms! The whole shebang! Tubers come with a warning on them and if you suffer from allergies, food or otherwise, flowers should be eaten with caution. Actually, any edible flowers added to your diet should be introduced slowly to observe any possible adverse effects. Author, Peter Gail reports that both buds and flowers, of the Daylily, have left him with diarrhea and stomach cramps when eaten excessively. He now introduces them slowly at the beginning of each season. According to Peter Gail, while young tubers are edible, the mature roots which they are attached to contain colchicines, rhein, and hemerocallin, all are toxic in large doses. Chinese Medicine says eating too much root can cause blindness. With this being said, DON’T EAT THE ROOT and even eating the tuber should be done with caution. Just saying.

Okay, who knew the first little green sprouts coming out of the ground every year from your Daylilies was edible? Yep! High in vitamins A & C to boot! Chinese call it ‘Xaun Cao’ or ‘Forget worry herb’ suggesting when eaten in large quantities it has sedating effects. Large quantities of the Orange Daylily SHOOTs have reportedly caused hallucinations. Everything in moderation! Add those greens to stir-fry’s or cut them up as a welcome healthy addition to salads.

According to Peter Gail, Daylily buds and ‘flowers’ have as much protein as spinach, more vitamin A than string beans, and the same amount of vitamin C as orange juice! WOW! Michigan State University’s Department of Horticulture, and Food Safety and Toxicology Center, isolated several compounds from Hermerocallis cv. Stella De Oro and have found them to possess strong antioxidant properties.

Survival Strategies BlogSpot notes the nutritional value of Daylilies as:

When we first started candying Daylilies, my favorite saying was, “When does a Daylily last longer than a day? When it’s a Crystallized Flower Daylily”. I might be getting tired of saying it, but it still holds true. We’ve done different recipes using our daylilies. They look regal on top of a cake but stuff them with some sweetened cream cheese and roll a few berries out of them and they become a magically elegant dessert. We’ve frittered and fried them and dipped them in a sweet bourbon glaze. I’ve stuffed them with chicken salad and tipped them in chocolate and if you really want to get fancy you can paint a little luster dust to the outer petals making each petal appear to have been edged in gold.

Here is a recipe for our Frittered Daylilies. We use Crystallized Daylilies but you can use fresh from the garden Daylilies as well. Fresh Daylilies may not hold their shape as well as ours. 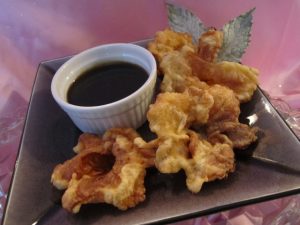 Daylilies are easy to cultivate, remember, this is one of the reasons they were brought here and naturalized. Daylilies like at least 5 hours of full sun, but will take some shade at the expense of fewer blooms. They’ll, also, survive under poor soil conditions but will benefit and thrive under, a good, composting every year. Daylilies are, also, considered drought tolerant, which means they will survive more than 8-10 hours of direct sun exposure. They make a perfect driveway or walkway border plant. Some varieties blossom spring and fall pulling double duty as a bloomer. You only need to divide Daylilies every 5-7 years. They get root-bound, so to speak. You’ll know this because one year you’ll notice they didn’t bloom as much that season? That means it’s time to dig them up and divide them! Fall is the best time to do this. Fall is the best time to establish and plant new perennials of any kind. I bet you thought spring was the best time to do this? Planting in the fall, at least 6-8 weeks, preferably 10-14 weeks, before the first hard frost, is the choice way to plant. Planting at this time of the year allows the root system to establish itself first. Plants seem to do better when they’re only concentrating on one thing and when you plant in the spring, they’re concentrating on two things. They’re trying to grow ‘up’ and add new vegetative growth and they’re trying to grow ‘down’ and establish they’re root system. It is hard to kill a Daylily, though. If you can’t grow Daylilies, you might as well give up growing, and hire a gardener like my sister does; she calls my Mom every year…Hehe!