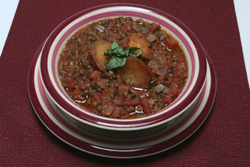 After years of eating my Mother’s lentil soup, discovering the lentil salad served at a très French bistro in the New York City neighborhood where I lived after college was a revelation.

I was so in love with this garlic-accented salad that the owner’s wife finally told me how to make it. To begin, boil an onion and whole garlic cloves in the pot with the lentils. When the lentils are tender, throw out the onion and drain the lentils, then mix in chopped shallots, carrots, celery, red wine vinegar and olive oil. Doing this promptly is essential, she emphasized, because only warm lentils will absorb the sharp vinaigrette dressing properly.

To learn more about lentils and cooking with them, I went to an Indian market. While I bought the ingredients for making a spicy dal, the manager explained that the red lentils I needed would cook quickly and fall apart because they were actually the inside of small brown lentils that had been peeled so their thick skin no longer held together their softer insides.

I also discovered Le Puy lentils from the Auvergne region in France. Dark green and peppery-tasting, they stay firm when cooked. Now grown in Canada and the U.S., Le Puys can cost up to $2.00 a pound at supermarkets and natural food stores, but their flavor and texture make them worth it.

Little brown Italian lentils from Pantelleria or Casteluccio are currently my favorites because their unique, meaty flavor makes dishes like this rustic stew (which I first ate in Abruzzo, the mountainous Italian region east of Rome) so satisfying. Sold at Italian food stores and via the Internet, they are quite costly, so if you prefer, use Le Puy lentils or the large, greenish brown, flat lentils sold at any supermarket.

Heat the oil in a medium Dutch oven over medium-high heat. Add the potatoes, cut side down, and cook until they are browned, 8-10 minutes. Using tongs, remove the potatoes to a plate. (If they stick, work the tongs under the potatoes to release them.) Set the potatoes aside.

Add the onions to the pot, and sauté for 5 minutes. Mix in the garlic. Cook until the onions are browned, 8 minutes, stirring often.

Add the lentils, tomatoes with their liquid, bay leaf and oregano. Pour in 3 cups cold water. Bring the stew to a boil, reduce the heat and simmer, uncovered, for 30 minutes. Add the potatoes, and simmer until the potatoes and lentils are soft, about 30 minutes, adding 1/2 cup water, if needed. Remove the bay leaf, and season the stew to taste with salt and pepper.

This stew tastes best made the day before it is served. To reheat it, place the stew in a heavy pot and cook over medium heat, covered, stirring occasionally, until it is heated through, about 10 minutes. If the stew is too thick, add some water before heating it.

To serve, divide the stew among 4 bowls. Sprinkle on the fresh basil.

Craft Projects You Can Make Out of Your Christmas Cards