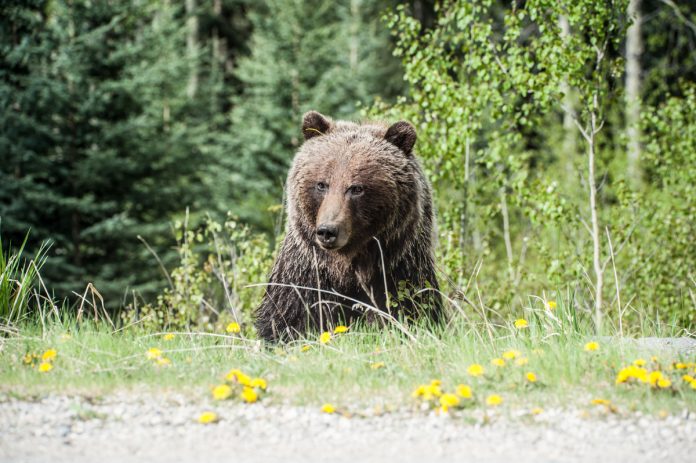 If you are out hiking in the mountains then you are a lucky person because mountains are amazing places to be. But, what should you do if you happen to come across a bear? You may see a bear at a safe distance or you may come around a curve in the trail, surprise a bear and see one up close. What you do in either circumstance could save your life.

For the first scenario – if you see a bear in the wild, here are some tips to follow. These tips are the same for both black bears and grizzly bears.

Keep your distance. Give it lots of space so it doesn’t feel threatened and can leave.

Stay together and remain calm. Stay calm and keep together in a group as you will look larger. If you have children with you get them right next to your side or even pick up very small children. More often than not the bear will walk away. Generally he wants to avoid you too.

Stand your ground. Never back up, lie down, or play dead. Playing dead when you first encounter a bear may just make the bear curious and cause him to come over and investigate. At the same time prepare to use your bear spray.

Don’t run away or climb a tree. Black bears are excellent climbers, so going up a tree will not get you away from them. Do not run away because both black and grizzly bears are faster than you. Worst of all, running away may trigger their predator instinct and cause the bear to chase and hunt you down.

At all costs do not get between a mother and her cubs! Human mothers and even fathers know that there is a powerful bond between a parent and their child. Bears are extremely protective of their cubs, so make sure you do not go near them.

That is what to do if you see a bear from a distance. But, now let’s talk about what you should do in the worst-case scenario if a bear attacks you. When I say attack, I mean that the bear actually makes physical contact with you such as it hits you with its paw or knocks you over.

The main things to look for to tell the difference between a black and grizzly bear are the spot between the shoulders and the shape of the face. A grizzly bear has a hump on its shoulders and its face is concave. In contrast to this a black bear has no hump and it has a flat facial profile, meaning that from the side it looks like there is a straight line from the tip of the nose to the top of its head. Size and color can help, but are not always reliable. A grizzly bear is usually, but not always, bigger. Color can be misleading because there can be brown colored black bears.

If it is a black bear then you should fight back. Fight with anything you have – a backpack, hiking pole, your hands, feet, a stick or a rock. A black bear is more timid than a grizzly bear and there is a chance that you can fight it off and survive the attack.

Generally, the grizzly bear is not trying to eat you but only wants to make sure you are not a threat to it. Hopefully, after it hits you or knocks you around a little bit, it will see you are not a threat and leave. If it turns out the Grizzly is not leaving and you can tell that the Grizzly wants to eat you then it is time to fight back with everything you can. It is possible to fight off and scare the Grizzly away from you even though it is much larger than you.

Just keep these tips in mind the next time you are out for a hike in bear country. The odds are that you will never need to know what to do if a bear attacks you, but it is good to know just in case. On average there are only three fatal bear attacks every year compared to 90 deaths a year from lightning and over 30,000 deaths from car accidents. If you are going to be worried about something, then you should be more worried about car accidents than bears.