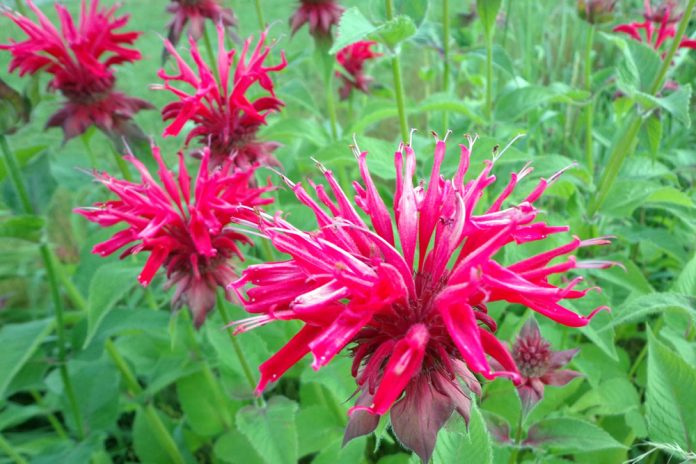 Bee balm is a perennial herb, Monarda didyma, that is native to North America. It’s a member of the mint family, Lamiaceae. Bee balm is a plant that grows best in damp habitats, adjacent to rivers and back waters, near springs and ponds. It is naturally found in wetland areas, thickets and fields.

Stiff, square stems grow three to five feet tall. The large, opposite leaves are a few inches long and oval to lance-shaped with a long-pointed tip. The terminal flowers are arranged in a composite flower head. The tubular flowers appear to have two lips with one tube pointing upward and the other pointing down. Long stamens protrude beyond the brightly colored blossoms. The odd crimson and scarlet flowers attract butterflies and hummingbirds. The bracts that lie just beneath the flower heads are maroon or reddish.

The natural blooming period is late spring through summer. When cultivating bee balm in a garden, it can be forced to bloom twice a year. When the first leaf begins to turn yellow after the blooming is complete, cut the plants down to just a few inches tall. The plants will grow again to bloom in the fall.

Bee balm is cultivated in herb gardens for a source of herbal tea leaves and as a very attractive flowering plant. It can be a very successful garden plant when planted in full sun. It’s popularly planted to attract butterflies and hummingbirds.

Bee balm is also known as Oswego Tea. During the colonial period in early America colonists became angry at having to pay high tariffs and high taxes. The Boston Tea Party was an event where English tea was dumped overboard in the Boston harbor as colonists rebelled against excessive tariffs on imported goods. Native Americans, in the region that was to become New York State, made an herbal tea with bee balm. Although the herbal tea was used by Native Americans for treating coughs, colds, fevers, stomach-ache and other maladies, the colonists adopted it as a replacement for English tea.

Bee balm is also called ‘Sonoran oregano’ because the dried leaves can be substituted for oregano in cooking. The crushed leaves have a peppery flavor that is great for stews, bean dishes, pasta and pizza sauce. Native American tribes of the Southwest, such as the Pueblo and Zuni, use fresh leaves in salads in the spring and summer and dried leaves as a spice in the winter.

Naomi Gallagher is a writer and a fantastic cook with a love for machines that help her make the most of her time in the kitchen, like the trusty bosch stand mixer. Learn more about using culinary herbs by visiting use that herb, where Naomi serves up a number of articles about culinary, medicinal and crafty herbs.