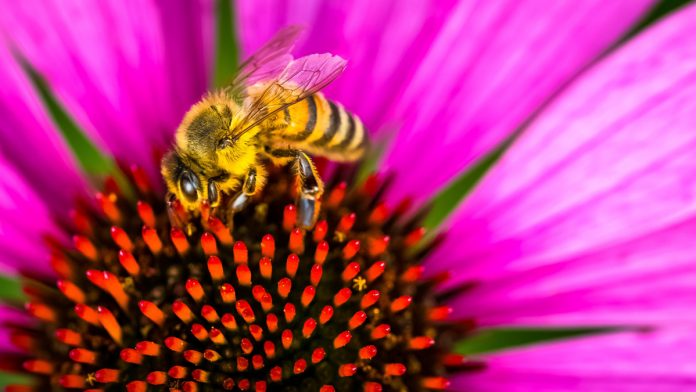 We need insects to make our gardens beautiful and healthy. We need them for food for certain species who then in turn pollinate our plants. Insects provide food for fish, birds and some mammals as well as domestic birds such as chickens and turkeys. It is interesting to note that insects provide well over 20 percent of a coyote’s diet.

Not all insects are harmful: Here are some beneficial insects:

Braconid wasps: are parasites of European corn borers, leaf mining sawflies, and bark beetles. They pupate in silken cocoons on the outside of their hosts.

Bumblebees & Honeybees: are extremely valuable for pollination; the honey bee is also valued for its honey and beeswax.

Caddis Flies: are extremely important in a aquatic environment since the larvae feed largely on mosquito larvae.

Carrion Beetles: these beetles dig the soil from beneath small dead animals such as birds and mice until they are covered completely. eggs are then laid by the beetles on the bodies and the larvae feed on the decaying flesh.

Cuckoo Wasp: an external parasite of wasp or bee larvae.

Damsel Bug: feeds on a large number of insects but especially on aphids and caterpillars.

Damselfly: the naiads (immature stages) feed on mosquito larvae, and the adults on mosquitoes and moths.

Dragonfly: the naiads feed on mosquito larvae, and the adults on mosquitoes and moths.

Ichneumons: are parasites of many pests, e.g. the larvae of wood wasps, horntails, sawflies, butterflies and moths.

Ladybugs: the larvae and adults feed on aphids.

Mayfly: often emerge in large numbers from lakes, and both larvae and adults are important as fish food.

Milkweed Butterfly: of which the most common member is the monarch butterfly. The larvae feed on milkweed – a common field weed.

Predacious Diving Beetles: a large group of aquatic beetles usually in ponds and quiet streams. Both larvae and adults are predacious and feed on a variety of small aquatic animals.

Sphecid Wasps: Digger Wasps and Mud Daubers. Each egg is deposited on a caterpillar or other insect ( such as cicada) which is paralyzed by stinging the “food” and egg is then stored in a nest dug in the ground, in the hollowed stem of a plant, or fashioned of mud and suspended from the underside of a structure such as a bridge.

Spider Wasp: most larvae feed on spiders which are captured and paralyzed by the adult wasp, and placed in a cell in the ground. Eggs are then layed on the spider.

Stone Fly: some species are predacious in the naiad stage, and fish also feed on them.

Water Boatmen: some species are said to eat larvae of mosquitoes, but probably their chief food is algae or the ooze from the bottom of the pond.

Water Strider: the food of both nymphs and adults consist of living and dead floating insects and other aquatic organisms.

Many fruits and vegetables and ornamentals require an insect, (usually a bee) to pollinate their flowers so that seeds may develop.

Ontario: Ministry of the Environment