The Case For and Against Cast Iron Cookware 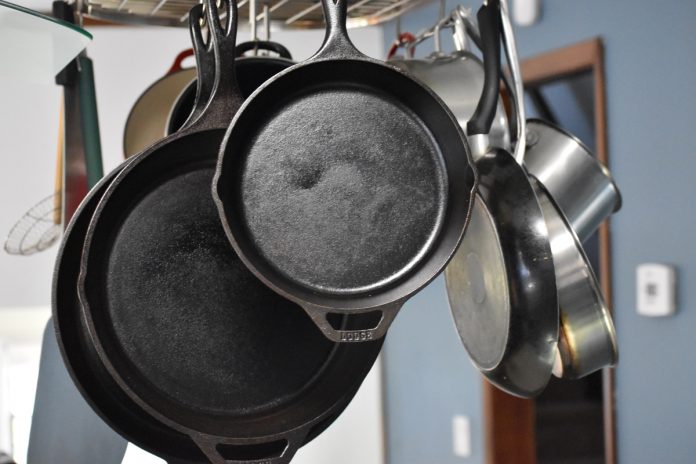 The use of cast-iron for cooking goes back over 2500 years albeit in Europe countries such as the UK have only used it for about 1000 years after it became popular when folk realized that complete pots with handles could be made using molten metal poured into moulds made out of sand. Originally cast iron pots came with three legs as they were to be used on the open fire.

Cast Iron Offers Many Other More Widely Based Benefits:

Cast iron must be seasoned to protect the metal from rusting and to provide a non-stick surface. This is a straightforward process which once done shouldn’t need redoing. There are many good articles explaining this process but in summary it comprises of a simple 3 step process:

If your cast iron cookware develops rust spots, scour the rusty areas with steel wool, until all traces of rust are gone then wash, dry and once again repeat seasoning process.

A lot of nonsense is talked about cleaning cast iron cookware; but the basics are straightforward:

There are many brands of plain and enameled cast iron coming from around the world. Our advice at the Outdoor Cooking Equipment Store is go for the traditional black cast iron as the price differential, given the limited additional benefits of enameled cast iron does not warrant paying so much more.

Enameled cast iron also does not offer the benefits of standard cast iron such as the ability to withstand searing heat, the leaching of dietary iron and it never enjoys that beautiful black hue.

What to Buy and How to Choose

There are many brands from which to choose. We recommend the Bayou Classic brand as the quality is truly exceptional judged against competing brands. When selecting which cast iron cookware to go for consider the following:

Stephen Kember is President of The outdoor cooking equipment Store. He is devoted to helping people to enjoy outdoor life and outdoor cooking. If you’re looking for cast iron cookware or cast iron Dutch oven then go to The Outdoor Cooking Equipment Store today as all cast iron cookware is on sale with reductions of up to 50%. http://www.outdoorcookingequipmentstore.com/index.php?cPath=13