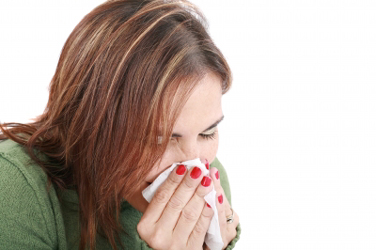 Nasal allergies are caused by inhaled substances. The lining of the nose reacts to these particles by swelling and increasing mucous production which results in a blocked, runny nose. Nasal allergies are very common in children, and appear to be getting more common all the time. In Chinese medicine, acupuncture is often used to treat allergies. However in the United States the most common treatment is over the counter products such as antihistamines and decongestants.

Nasal allergies are responsible for 3.8 million lost workdays and school days and every year. Many hay fever attacks (nasal rhinitis) are often misdiagnosed as a common cold. Taking aspirin and staying home for a few day does appear to alleviate the symptoms but it does nothing to correct the under lying cause since the common cold is not the problem.

Physicians do not know why some people are more sensitive to a specific substance than other people but they do know how the body reacts to allergies. Nasal allergies are Allergies Type 1, also called Contact Allergies. Some type of substance such as pollen, dust, dust mites, animal dander and mold spores come into contact with your nasal membranes which causes your hypersensitive immune system to kick in. Symptoms include swelling of the sinus membranes, increased mucous production, red and watery eyes. In sever cases you can also develop hives, shortness of breath, bronchial spasms and other symptoms.

Treating the symptoms and not the cause of the problem is not the best course of action. Finding what causes your irritation and then avoiding it should be the first step. The second step should be the boosting of you immune systems ability to heal itself such as taking large dosages of vitamin C in amounts is one of your best means of defense against nasal allergies.

Common vitamins and over the counter products that can help you with your nasal allergies are Vitamin C, Eucalyptus oil, Vitamin E, Beta Carotene, Glucosamine, Quercitin,

Vitamin C is essential for defending the body against pollution and infection. It enhances the immune system and aids in growth and repair of bone and tissue. Take 1,000 to 5,000 mg daily.

Eucalyptus or olbas oil in boiling water and inhale the steam that is being generated. This treatment is also very good for any type of stuffy nose due to allergy problems. Both readily diffuse into the air and can provide benefits to nasal and bronchial areas.

Vitamin E protects the lung tissue from inhaled pollutants and aids in the functioning of the immune system.

Beta Carotene protects the mucus membranes of the mouth, nose, throat and lungs. It also helps protect Vitamin C from oxidation, which enables it to perform at optimum efficiency.

Glucosamine is an anti-inflammatory and may give some relief from bronchitis symptoms.

Quercitin is also known for its ability to block the release of histamines, thus reducing or preventing allergy symptoms. Take 500 mg twice daily.

Always consult your doctor before using this information. This Article is nutritional in nature and is not to be construed as medical advice.