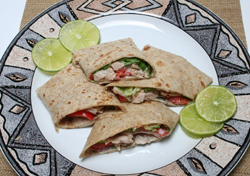 The culinary influences of Spain, Mexico and the Spanish speaking nations of Central America, South America and the Caribbean are evident throughout the country. National Hispanic Heritage Month, underway now, is a good time to take a closer look at foods from some of these countries, many of which are now common menu entries.

Fajitas, for example, hardly seem exotic anymore. They are a true Tex-Mex creation dating back to the 1930s. Mexican ranch hands were given skirt steak – a tough cut, often thrown away – as part of their pay. They marinated it in lime juice and cooked it over an open fire. The grilled meat was cut in strips and eaten in a warm tortilla. The word fajita comes from the Spanish word faja that means “belt” or “sash.”

In Mexican restaurants all over the country, today’s fajitas are made with poultry, fish or vegetables as well as meat.

Turkey fajitas have all the flavor of beef fajitas with less of the fat. It’s just the kind of dish recommended by the American Institute for Cancer Research (AICR) as part of a healthful diet.

AICR’s recommends a New American Plate that is plant-based. Their rule of thumb is that plant foods such as vegetables, fruits, whole grains and beans should cover two-thirds (or more) of the plate. Fish, poultry, meat or low-fat dairy should cover one-third (or less) of the plate.

Research suggests that such a diet will help with weight management and impede the process that leads to cancer. Natural plant substances, called phytochemicals, have been shown to have cancer-fighting properties.

A plate of turkey fajitas is a good, healthy way to celebrate the country’s Hispanic heritage.

Combine lime juice, garlic and jalapeno in a bowl. Add turkey, turn to coat and set aside.

Purée yogurt and cilantro in food processor or blender until smooth. Transfer to a small bowl and set aside. (Sauce can be made ahead if refrigerated until ready to use. Remove from refrigerator early enough to bring sauce to room temperature before using.)

Wrap tortillas in foil and place in oven until warm, about 10 minutes. Meanwhile, heat a large non-stick skillet over high heat until very hot. Add oil and tilt pan to coat evenly. Add turkey and stir-fry, stirring constantly, until cooked through and lightly browned. Transfer to a medium bowl and sprinkle with salt and pepper.

On each tortilla, place a layer of shredded Romaine, and one-sixth of the turkey and the peppers. Add a spoonful of cilantro-yogurt sauce. Fold tortillas around filling and place on a serving platter. Serve with yogurt-cilantro sauce.