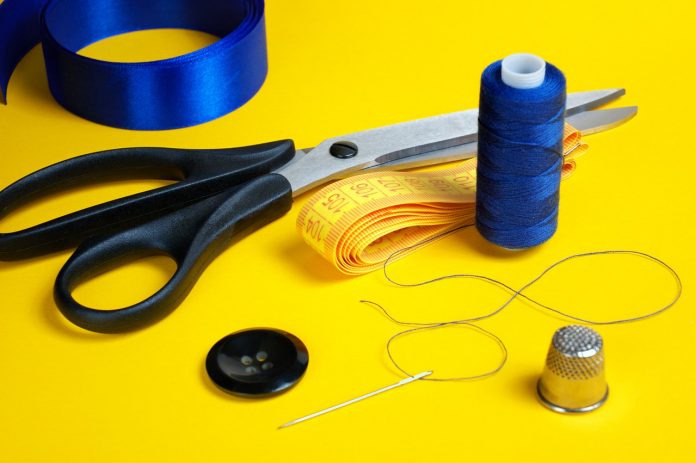 If you’re going to do any sewing, you need some scissors. In fact, even if you aren’t doing any sewing, every household needs some scissors! They’re a useful tool, so it’s important to have at least one pair.

First off, though people often use the name interchangeably, scissors and shears aren’t really the same thing and are meant to perform different tasks. Shears are used for the heavier cutting jobs, whereas scissors are best used for lighter cutting jobs such as trimming or clipping threads.

A pair of shears generally measures about 6 inches or more in length. To hold the shears, there is a small ring handle for the thumb, and a larger one for inserting two or three fingers. Holding the shears by placing your fingers through these rings gives better leverage to perform the heavier tasks for which shears excel

>> Must Have Home Sewing Box Essentials

Scissors range in length from 6 inches on down to 3 inches or even less. Besides being smaller than shears, the handle rings are of equal size

Most scissors are made of steel. There are two main types of steel used for scissors. The first type, carbon steel, is used to make scissors with the blade and the handle formed in one continuous piece. This type of steel is very strong and stays sharp. Scissors made from carbon steel are usually plated with nickel or chromium to prevent them from rusting.

The other type of steel scissors are those made from stainless steel. A plastic handle is usually fitted to the metal blade. These scissors aren’t as sturdy and don’t retain a sharp edge as long. They’re also harder to re-sharpen. However, they are generally much cheaper.

There are many types of scissors available. Here’s a small sampling:

For just about any task, there’s some kind of scissors or shears that will do the job.

Caring for Scissors and Shears

The first and foremost rule of scissors: Scissors should ONLY be used to cut the materials for which they were designed.

Do not, I repeat, do NOT use shears meant for cutting material for household tasks like cutting paper. Using scissors for something other than the materials they were intended to cut will dull the blades.

Scissors and shears should be kept dry and dust free, with an occasional oiling at the screw. Keeping them in a safe place like a sewing box, or with higher quality cutting instruments, the box they came in, will help protect the points. Also, scissors should be stored in a closed position. Setting down scissors in an open position is the most common cause of dull blades.

High quality scissors and shears can be re-conditioned by the manufacturers or other companies providing that service.

Summing Up Scissors and Shears

For scissors to be used round the house, cheaper scissors work fine. If they become dull or broken, it’s cheap to replace them. For cutting fabric and other sewing tasks, a good set of shears is a wise investment.

Take care of your scissors and shears, and they’ll reward you with easy cutting for years to come.