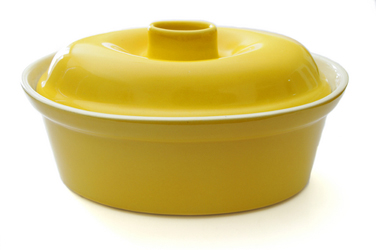 There are many opinions on cleaning a Dutch Oven. Not all Dutch Oven cooks believe you can use soap in your Dutch Oven. Some cooks suggest never to wash them, others wash them, but not with detergent. We have found that a well-seasoned oven will not be damaged by using a few drops of dishwashing soap if you have been cooking something really greasy. Just be sure to rinse several times to make sure there is no soap residue. If your oven is not well-seasoned, whatever you put in the oven will be absorbed into the pot and become part of your next meal.

Dutch Oven care begins with seasoning, but it’s important to clean them properly after each use. Cleaning cast iron is easier than scrubbing pots and pans. As soon as possible after using your Dutch Oven, scrape out as much food as possible with a plastic scraper. Put 1 – 2 quarts of hot water in your oven and scrub with a plastic scrubbing pad or a vegetable brush. Immediately after washing, dry the oven thoroughly by putting it in your kitchen oven at 150 to 200 degrees for about 10 minutes.

Cast Iron can only be dried by heating. Heat dries out the moisture in the pores. If a pot is not completely dried after it is used, it will rust. The pores must be opened by heating up, and the moisture dried out of it. Don’t let the oven set around after washing, go straight from draining the rinse water into the kitchen oven if possible. If you are camping and don’t have a kitchen oven to dry a Dutch Oven, dry it the best you can and try and store it away from moisture.

Dutch Ovens when cared for, will last for generations. Be sure your oven has been cleaned and lightly oiled before putting it away. Try to keep your ovens in a dry, warm place. Remember, moisture with cause cast iron to rust. Leave your lids slightly ajar, allowing the air to circulate. I like to store with a paper towel rolled up and sticking out from under the lid. The towel inside the oven acts as a wick and will help absorb moisture.

Tip: Here’s another idea. If you need to store an oven for long periods of time, use a light-weight food-grade Mineral Oil and coat the oven, inside and out. It’s cheap and effective. Once you have sealed the oven with mineral oil, no oxygen can reach the seasoning and it will last many months.

With correct use and proper care, a well seasoned oven produces a unique flavor unequaled by any other cooking utensil. That’s the Magic, it looks great and tastes even better!

Glea Reno and Dennis Reno are the owners of Dutchovenmagic.com. They are based at Billings, Montana and have taught Youth Groups, Scout Troops, Church Organization and friends what they have learned over years in Dutch oven cooking. They also do cooking demonstration at various retail outlets.

10 Autumn Cleaning Tips for Your Home

How to Care for Stone Flooring in Your Home

Tips for Caring for Leather Furniture

How to Clean Braided Rugs