Coffee as an Herbal Medicine 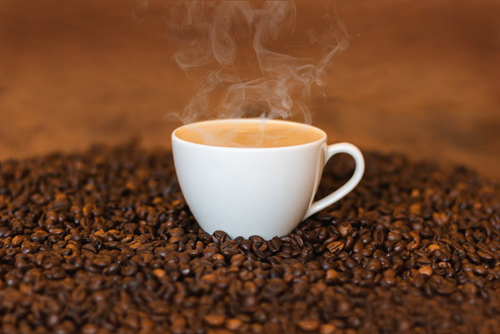 The name Coffee is thought to come from Caffa, an Abyssinian province. Some Arabic names for the Coffee fruit are Cova and Qahwah.

Alien pest. Drink it all.

Coffee grounds are used in Japan as a body scrub and skin cleanser. [Japan]

Cold coffee is used by fishermen to wash the smell of fish off their hands.

* Not with Stomach Heat.
* Small doses only for liver qi stagnation.

* Not in pregnancy or while nursing.
* Not with gastritis, insomnia, heart palpitations, agitation
* Not in large doses with muscle spasm; shoulder, neck, or back pain.
* Not without giving me some.

* “Combines well with digitalis” [Esoterica – Dangerous – DO NOT try this at home, kids]
* Caffeine with aspirin in over-the-counter analgesics
* For arthritis black coffee is mixed with lime juice [Trinidad]

* Antioxidant
* Coffee will raise serum cholesterol unless filtered through a paper filter.
* Increases gastric secretions, [NO SOURCE] plasma homocysteine [Urgert 2000] and catecholamine levels [NO SOURCE]. It reduces urea and phosphoric acid in the urine. [NO SOURCE]
* Increases blood pressure in non-habitual users. [NO SOURCE]
* Heavy coffee drinking is correlated to increased risk of suicide [Tanskanen 2000] and decreased risk of colorectal cancer [Tavani 2000] and Parkinsons disease [Abbot 2003, Ragonese 2003].
* Coffee is used as a stimulant, used to ward off coma in narcotic overdose and snake bite. In acute cases administered as an enema. (As if a coma wasn’t enough of an indignity.)
* A Harvard study concludes that the incidence of kidney stones drops 10% if you drink coffee, and 14% if you drink tea.
* Causes relaxation of the bronchial tubes and the smooth muscles of the blood vessels (except cerebral blood vessels).
* A diet of 20% green coffee in hamsters reduces tumor growth by 90%.
* Caffeine is injected with sodium benzoate for poisoning or respiratory failure
* Wake up and smell the coffee! A University of California study reports that the steam rising from a cup of coffee has the same amount of antioxidants as three oranges.

Legends of The Discovery of Coffee:

— Middle Eastern shepherds noticed that when their sheep ate the berries both the sheep and the shepherd were up all night.

—  In 1258 Sheik Omar was in exile and was complaining about his problems when a bird began singing in a tree. Trying to grab the bird, he instead ended up with a handful of berries and flowers. He then proceeded to make a “perfumed drink” from the berries and felt much better.

— An Islamic monk was vexed by his inability to stay awake during his prayers. One day he saw a goat herd dancing with his goats and was told that the goat herd’s happiness was caused by a specific bean. He was convinced that Mohammed had sent him this herb as a gift to keep him awake. The monastery was thereafter called the home of the “Wakeful Monks”, as they would drink coffee as they prayed. (A similar legend exists in China regarding tea.)

—  Coffee and chocolate (those twin guilt-marinated New-Age bogeymen) are to many of people what sex was to the Victorians… vices that are publicly reviled while being craved and lusted-after behind closed doors. Both have now been shown to have strong anti-oxidant properties. The antioxidants in coffee are heterocyclic compounds which may prevent heart disease and cancer, while other ingredients may increase these risks.

—  Coffee is second only to oil as a world commodity and is the most popular beverage worldwide with over 400 billion cups consumed each year. In the last three centuries, 90% of all people living in the Western world have switched from tea to coffee.

— The caffeine in coffee beans is bound to an organic acid and requires roasting to become active, but dark roasted coffee (unlike tea) has less caffeine than the lighter brews.

— Coffee can be burned as a room deodorizer

— African warriors would mix mashed coffee berries with animal fat, roll them into balls, and eat them before battle.

— In Bolivia, the bark is used to make a coffee substitute called Sultana.

— Brazil is the world’s largest producer of coffee. All of Latin America’s coffee industry emerged from one tree in a Dutch botanical garden.

—  In Jamaica, the rats often chew the fruit off of the coffee berry. The kernels fall to the ground and are gathered to make a brew called “rat coffee”.

— In Turkey the inability of a man to give his wife enough coffee is considered grounds for divorce. (no pun intended)

— The name Coffee comes from Caffa, an Abyssinian province.

— By the 1400s Mecca had several coffee houses.

— Most Arab coffee was shipped through a port called Mocha. Arabs were forbidden to export the plant but in the 1600s the Dutch smuggled out some coffee starts to the island of Java. This was presumably the first “cup of java”. In 1652 the first Coffee shop was opened in London

— After hearing that coffee was “the Devil’s potion”, Pope Clement VIII tried a cup and declared it to be “so delicious that it would be a pity to allow the Muslim infidels to have exclusive use of it.” He then baptized the coffee to make it a Christian beverage. Even Martin Luther agreed with this. About the same time J.S. Bach wrote his Coffee Concerto.

And, Finally For Those Who Cannot Sleep… A Few Quotes:

“From the 19th century Eclectic Physicians: “Coffee, in strong infusion, without cream or sugar, is one of the first agents to be thought of in opium narcosis… and electricity, and particularly flagellation, resorted to….” – – King’s American Dispensatory (Doctors after my own heart)

“Far beyond all other pleasures, rarer than jewels or treasures, sweeter than grape from the vine. Yes! Yes! Greatest of pleasures! Coffee, coffee, how I love its flavor, and if you would win my favor, yes! Yes! Let me have coffee, let me have my coffee strong!” – – Johan Sebastian Bach

“Coffee! Thou dost dispel all care, thou are the object of desire to the scholar. This is the beverage of the friends of God.” — In Praise of Coffee,” Arabic poem (1511)

“He that would drink it for livelinesse sake, and to discusse slothfulnesse, and the other properties that we have mentioned, let him use much sweat meates with it, and oyle of pistaccioes, and butter. Some drink it with milk, but it is an error, and such as may bring in the danger of leprosy.” – – Old Arab Text

“Coffee should be black as hell, strong as death, and as sweet as love.” – – Turkish Proverb

Medicine at Your Feet: Healing Plants of the Hawaiian Kingdom by David Bruce Leonard

David Bruce Leonard is a deep ecologist, acupuncturist, martial artist, and plant lover. David believes that our health and the meaning of our lives are inseparable from our interactions with the natural world. DavidBruceLeonard.com.