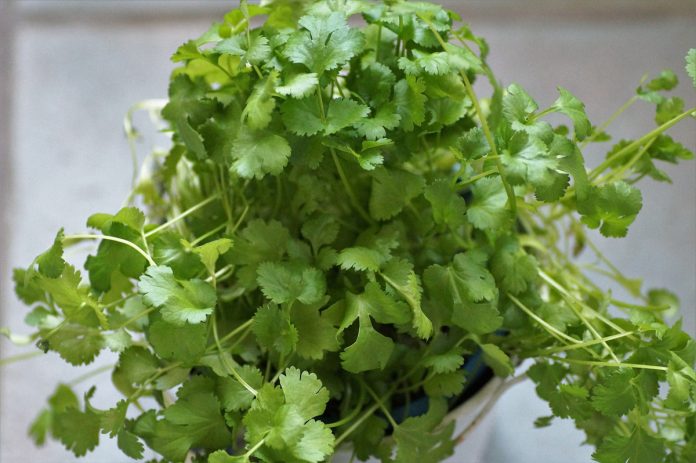 These herb garden plants make a decorative addition to any herb border – they may also be cultivated in pots quite successfully and will reach a height of 45 cms (1.5 ft). The lower leaves are fan-like (similar to flat-leafed parsley), upper leaves are filigreed and the tiny flowers in high summer are a pinkish mauve.

Coriander has developed into 2 distinct categories – the seeds and the leaves. Despite the seeds being cultivated and used for over 3000 years, the leaves were virtually unknown in the West as a culinary entity up until the mid 20th century; coriander leaves are now reputed to be in the top 5 most popular herbs worldwide. Once seldom listed as herb garden plants in information brochures, fresh coriander has come into it’s own at last.

Known variously as silantro (or cilantro), coriander or dhania – depending on your country of residence – the leaves of coriander have taken the world by storm. Before the seed ripens these herb garden plants can be distinctly odorous, but on maturity the rich aroma develops.

For the best flavour, seed should be freshly ground shortly before use. In Indian cooking the seed is roasted before being ground for use and the leaves are used either in a curry or as a garnish – or even both. Seeds are often added to a potpourri mix.

The rounded beige seeds of coriander are best known as a flavoring for pickles and curries in both Europe and America. But in India and the Far East green coriander seed – or the fresh foliage – accounts for one of the distinctive curry flavors. The foliage part of these herb garden plants is happily becoming a must-have item in western supermarkets.

A native of southern Europe and the Middle East, coriander used to be popular herb garden plants in England up to Tudor times. The early settlers in America included coriander seed among the beloved items they took to the New World, as did the Spaniards in Mexico. Today, coriander enjoys a wide popularity. However, among certain groups it still has mythical associations – the Chinese believe it to be endowed with the power of immortality and Jews include it in the bitter herbs prepared for the Feast of Passover.

Coriander grows best in a dry atmosphere – in fact it is difficult to grow in damp or humid areas, and needs a good dry summer at the very least if a reasonable crop is to be obtained. Choose a sunny place and sow seed in situ once all danger of frost has passed. Alternatively, sow into decorative containers and continue to cultivate as a container plant on an apartment balcony, sunny patio or yard. The stems are weak – either add a stake or give it a companion to lean against. Coriander makes a good Winter crop, depending on local climate. Where I live, a dry warm Winter gives good results and we indulge in many hot curries with coriander garnishing.

Sprigs can be frozen or preserved in salt and oil; fresh leaf coriander does not dry successfully. The best flavor is obtained from these herb garden plants by using leaves soon after picking.

Pete Steel has grown herbs for 25 years in several different climates and soils.