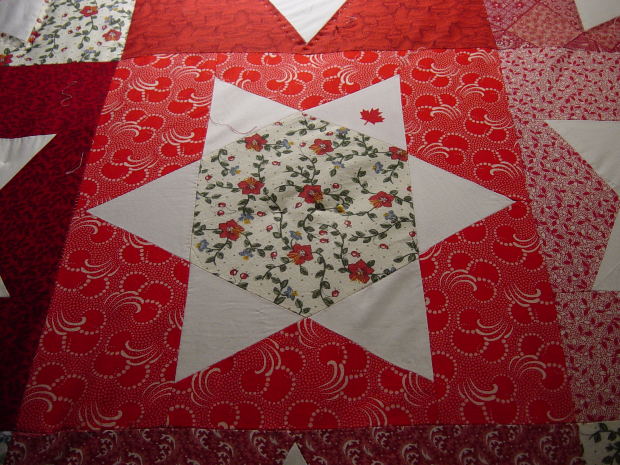 Quilt designs are created by combining blocks that have different color variations.

A block is the basic unit of a quilt top. Typically blocks are square. They can be made any size, and frequently a quilt is made using many blocks with the same design. They can be pieced together from smaller pieces (called patches) or could be applique? It is also possible that a block could be a solid piece of fabric.

The smaller components of a block are called patches. They can be many different shapes – triangles, rectangles, squares, diamonds, or curves – but the idea is to sew patches together so you end up with a square.

By changing the shapes of the patches within a block (i.e., substituting triangles for squares) and/or changing the placement of the colors of the pieces (i.e., switching light fabric for dark fabric), you can create a whole new quilt design while keeping construction of your quilt the same.

Simple is the name of the game for many quilters. Using one or two shapes for all of the pieces in your quilt makes it easy to sew; and squares and triangles offer many advantages in terms of simplicity. As a beginner quilter, making the sewing simple gives you the opportunity to focus on learning and practicing basic quilt making techniques that you will use as you develop your craft.

Interesting variations in quilt blocks can be achieved through placement of the fabrics in addition to how each patch is divided.

A simple nine patch quilt block can be used as an example of how different a block can look just by changing the placement of colors within the nine patches of one block.

Adding a little more complexity, you can take some of the square patches in the blocks and divide them in half from corner to corner (commonly called half-square triangles in the quilting world), and create a star design.

Using only half-square triangles and square patches, by simply re-arranging the fabrics, your checkerboard or square turns into a basket, or leaf shape, a bow tie shape, or even a series of diamonds.

You can add complexity to your design by increasing the number of colors in your quilt, and your design changes once again. What once was a black and white checkerboard can transform into a block that looks like the letter H.

Your block can look like it is 3-dimensional by using specific colors in designated places.

And all of those design changes can be created by using only three basic shapes – squares, half-square triangles and quarter-square triangles – plus a little imagination in the placement of your colors.

As you sew your blocks together, they can look completely different. For example, you could take blocks of two simple half-square triangles, place them in columns, alternate the direction of the cut of the triangle, and create a quilt that looks like columns of zigzags. Using the same blocks, placing them so all of the diagonals are facing the same direction, your quilt could look like an old-fashioned scrap quilt.

Penny Halgren is a quilter of more than 26 years who seeks to interest new quilters and provide them with the resources necessary to create beautiful family heirloom quilts.