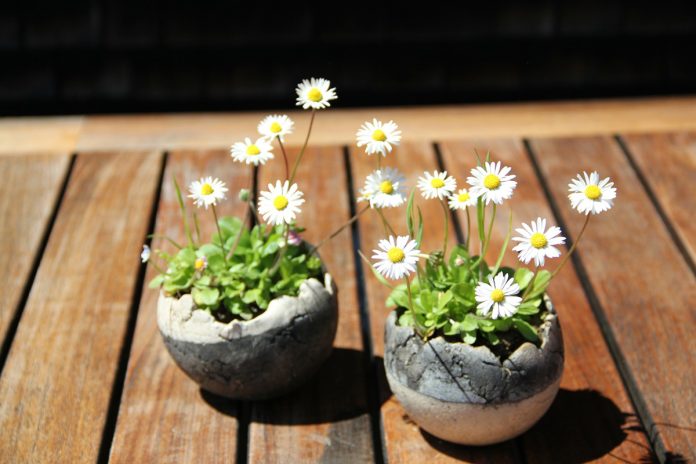 Daisies are loved because of their simplicity and their lively colors. Their Latin name is Bellis parennis, which stands for “pretty”, and “everlasting”, respectively. Moreover, the name “daisy” is thought to be a modification of “day’s eye”, as they close their petals at night, and open them in the morning. They have been grown in the ancient temples of the Egyptians, because of their medicinal properties. A daisies bouquet is great to have in any home, and since the flowers are considered to be children’s, and to represent innocence, it will surely be well-received by anyone.

Daisies have many uses; the leaves that are young can be eaten either cooked or raw, and so can the flowers. In addition, many like to drink daisies tea, because it is great for empowering the metabolism and to help the appetite. Historically, Roman surgeons have used their juice to soak bandages which would later bind cuts. Today, it is still used in herbal and homeopathic medicine.

As mentioned before, daisies have positive meanings attached to them. As a matter of fact, a daisies bouquet symbolizes only good things. They represent the perfect purity, without a sin staining their innocence. Eternal love is also often declared through daisies. In addition, they represent secrets, and when a single flower is given to a person, the action symbolizes the transfer of a secret to the one receiving the flower. However, when wrapped in paper, or any other material, the daisies bouquet represent the truth, which is hidden from the world. Thus, it doesn’t matter which meaning speaks to you, as a daisies bouquet will surely never offend anyone.

There is a Roman legend which stands behind the daisy, to strengthen its position in the world. It is said that the nymph Belides attracted the attention of Vertumus, who was the god of the orchards. To get away from his eyes, as she did not want the attention he gave her, she changed herself into a daisy.

To add to the beauty and mystery which surrounds the flower, they have been thought in the past to have the power of revealing a loved one’s feelings. Young ladies living in the Victorian era often plucked the petals of the flower, saying “He loves me” for one, and “He loves me not” for the next. The last petal predicted which one of the two phrases was true. Though that might not be the best way of finding such things out, it is still used for the fun of it, and for those unlucky girls, who keep obtaining the “wrong” answer, an entire daisies bouquet will surely be of great help.

Daisies are a great example that beauty need not be useless. With such a large variety of uses, from cooking to healing, they are great for a lot of things. Of course, one shouldn’t forget that they look beautiful in a vase, bringing a wave of freshness to any house. As they represent children, innocence, the truth, or secrets, a daisies bouquet makes a great gift for loved ones.

Ioana Iacob is a flower lover who wants to share her passion for the wonderful world of flowers that bring joy into our lives. She tries to offer you the best pieces of advice and information that will help you in your pursuit to grow flowers in your own garden or simply offer them as gifts.

Echinacea: Over 250 Years of Medical Use