Does Your Cilantro Grow Flowers Too Quickly? Here’s Why 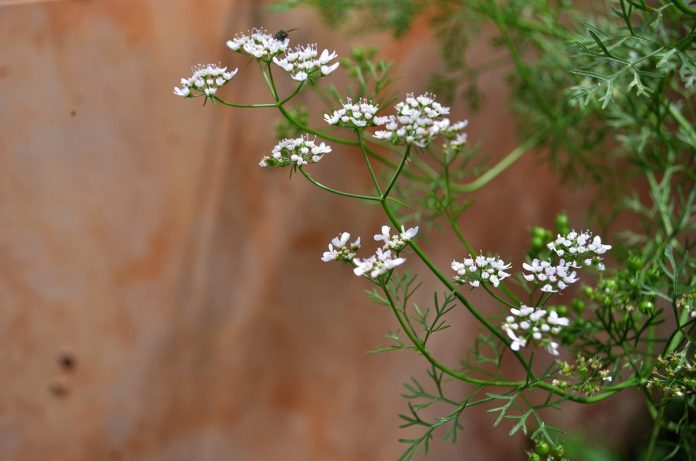 How Does Cilantro Grow Best?

Cilantro is actually a relative of the carrot, and like the carrot it has a particularly long root. Transplanting is tricky because of this, so I recommend planting cilantro from a seed. We had previously talked about how the seed from the cilantro herb is actually the popular spice, coriander.

Because cilantro grows quite quickly, it can often go to flower before herb gardeners want it too. They know that the leaves are at their most flavorful before the plant goes to flower. How do we prevent it from getting away from us and creating a flower shoot too soon? The answer lies in temperature.

Cilantro, like most plants in the home herb garden, loves sunlight. That’s fine in the early spring or fall, because the temperatures are cool. However, because cilantro is an annual, people want to make cilantro grow over and over by replanting, all through the season. That means many of the plants will be planted during the warmest part of the summer. There’s the problem.

You see, when the temperature reaches about 75 degrees fahrenheit, or 23 degrees celsius, cilantro regards that as a signal to throw out a flower stalk. So, does cilantro grow best in the shade? Not necessarily. It still prefers the direct sun, but we need a way to cool off the soil a bit near its root.

To let cilantro grow lush with a full set of leaves when cilantro is planted deeper into the spring and summer, steps need to be taken to control the temperature that triggers flower growth prematurely.

With these steps, you can make cilantro grow for up to eight weeks without flowering. Of course, you should let a few of your cilantro plants go to flower and then to seed, so you can save the little coriander seeds for planting next time.

In my next article, I’ll be talking about how you can kick start herb garden plants with more expert tips.

Spring Herbs – Uses for The First Plants of The Season