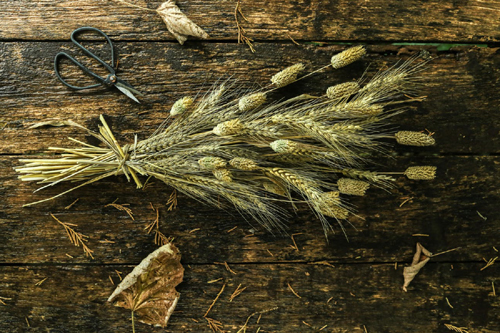 Have you ever wondered how the pioneers got their bread? After all, there were no brightly-lit grocery stores boasting shelves of different varieties of bread. For the early settlers in southern Ohio and other wilderness areas, it took much work to create a simple loaf of bread.

The counties of Highland and Ross saw influxes of settlers in the years 1805-1810. Men and women came looking for good, fertile farmland that was affordable. They brought provisions with them for the first few months, but soon crops had to be sown for the winter to come. Pioneer farms were planted in wheat, corn, and rye. In addition, orchards of peaches and plums were eagerly planted. Surprisingly, apples were a rarity on the Ohio frontier of the early 19th century.

By early fall, the wheat field would be ready for harvest. Men would swarm the fields with sickles in hand, ready to reap the ripened grain. The next step was thrashing the wheat with flails to loosen the chaff from the grain. The chaff was blown away by the wind while two sturdy pioneers tossed the grain in a sheet. Following this, the grain was loaded into a wagon and driven to the mill.

Although most people think of water-powered grist mills, the main type of mill in this area was the horse mill. Creed’s Mill was the first of this type of mill in the area. Men would line up with their wagons, waiting their turn to grind their grain using their own horses to power the machinery. The horse was hitched to a long sweep that turned round and round, working the machinery. Oftentimes, pioneers would have to wait three to four days for their turn as everyone’s harvest was ready at the same time. Mill boys, clad in thin ragged clothes and often barefoot, helped in the procedure. Wives and daughters had a task to do, also. After it was ground, they sifted the bran from the flour using a bolt of cloth attached to a sieve.

At last, the flour would be ready to use and to store for the winter months. After all that work, the bread it produced must have tasted delicious!

Corn would be processed similarly, making meal that could be bolted-or run through a series of increasingly fine cloth-to make meal of finer texture for cornbread or coarser meal for other purposes. Of course, one of the most common uses for corn was to make liquor. An easy way to store corn without spoilage, corn whiskey was drunk by most pioneers. The church was not against its use as long as drunkenness didn’t occur. Whiskey was a common form of trade, also. A bushel of corn equaled a gallon of whiskey in a society that relied on barter rather than money.

In later years, water-powered mills were built along creeks and streams. Often, they were washed away by the spring floods. In 1967, Paint Creek was dammed, and the wild little river was tamed at last.

Our forefathers were hard-working individuals. The production of wheat bread or cornbread was a laborious series of tasks that involved field work and mill work before the final stage of baking the bread in the cabin’s kitchen. All members of the pioneer family participated in the chores that ensured that they would eat throughout the cold winter months.

Donna Gruber Adair is a former teacher of high school English and creative writing, with a degree in history. Her short stories and poetry have won awards. Her new book, An American Odyssey, tells the story of a real-life pioneer family on the frontier.