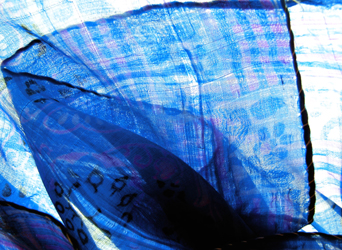 In the 16th century, India’s textile workers discovered how to make color dyes adhere to cotton and linen, thus making it colorfast. Before this important discovery, colors and designs printed onto cotton and linen, would soon wash out and fade in the sun. Berry and vegetable dyes were not fast. Clothes were drab and colorless. People valued wool and silks, which held color well. Silk was too expensive for the average person and wool was too hot in some climates.

Most vegetable and plant dyes washed out except for indigo, a blue dye, which is why many woven white and blue check fabrics were woven in the colonies. Both indigo plants and cotton plants grew abundantly in the warm humid climate of India, as did the best plant for red dye obtained from the root of the madder plant. Indigo was fast, madder red was not. But getting the blue dye from the indigo plant was not easy or quick. It was labor intensive and produced an expensive dye that was valued across the world.

The primary method for dyeing with indigo was vat dyeing, where a chemical reducing bath took place in a vat (container) above or below the ground. This was necessary in order to make the insoluble indigo plant soluble. The process of getting the dark blue dye from an indigo plant started with fermentation in the vat filled with an alkali solution. The resulting dye liquor would be left to cool and harden. It was cut into hand-size chunks to be shipped in divided boxes to indigo dyers who then ground it to a powder that was soluble in water. Dyers boiled the mixture, then cooled and stirred it. They removed extraneous materials like twigs that would affect the printing. Next, the mixture was put into the vat with the cloth; copperas and lime were added to it and the dye-bath became yellow in color. After a time, the cloth also turned yellow. It was not until it they lifted it from the vat that oxygenation took effect (in about 12-15 minutes) which turned the cloth blue. Afterward the indigo was insoluble again. Commonly, the last remaining color in an old faded or deteriorated quilt is cotton indigo dyed.

Simply adding more dye to the bath would not produce a darker shade of blue. This required repeated submerging followed by oxygenation after each dipping. If an area were to remain white, a resist paste made of wax or a flour paste was brushed on to cover it to prevent the dye from penetrating the fabric under it.

There were two other methods that printers used to apply indigo to cotton: penciling (also spelled penciling), and China blue. Penciling was used to hand brush blue onto small areas of a multicolored print, usually chintz. A brush applied the reduced dye directly onto the area, where sit oxygenated quickly. It could look spotty as uneven, and have a poor registration. There were more pencilers (usually young girls and boys) employed in mid- eighteenth century print works than any other job skill.

The China blue technique did not reduce the indigo plant beforehand. Instead, indigo plant was applied to cloth using wood blocks or engraved copper plates. After printing, the cloth was placed first in a lime bath, then in copper bath, then back and forth repeatedly. This yielded a light or light-medium shade of blue on a light ground. Bird, bouquets and pillar prints made with fine liens are the result of this rare technique.

Eventually, stable direct printing of indigo was possible in the last quarter of the 19th century. Glucose utilized indigo in such a way that the reduced version combined with steam fixed the color. German scientists first synthesized indigo in the 1880s, patenting it in the early 1900s. Commercial dyeing with synthetic indigo did not begin until 1897, but home dyeing and trial runs were made earlier and synthetic dyes were available to the public. Many shades of indigo dyed cotton are found in quilts made from 1890 to 1918, the start of WWI. Synthetic indigo dye essentially replaced the use of natural indigo by the early 1920s.

Dyes on fabrics are one of the clues to dating textiles and quilts, but indigo dyes were used around the globe and for generations, making it quite difficult to date indigo dyed fabrics found in America. It is easier to date this fabric when it is on a quilt as the style of the quilt provides a strong clue to dating it.