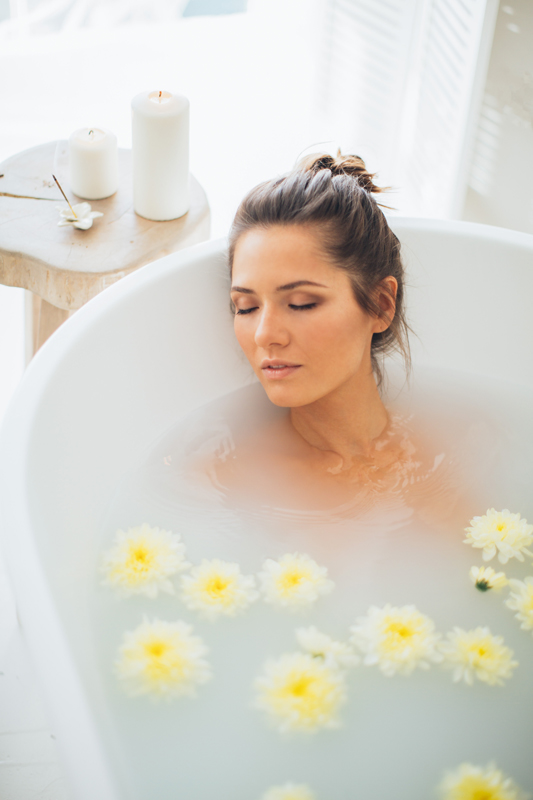 In Peru, floral baths known as banjos florales (‘flower baths’) are a staple of shamanic healing from the high Andes to the Amazon basin, where they are used to wash away unhelpful spirits so that blockages are removed and the energy of the universe can flood in to correct the imbalance.

How are these baths taken?

The bath is most often taken on the morning after ayahuasca ceremonies so that the body is modified to accept the new information of the visions. But this is not always true. Sometimes baths are taken before the ceremony to open the person up, and sometimes they are taken by themselves, as a healing.

A tub is filled with water and to this is added the plants that the patient most needs, like mocura and ajo sacha, some of the most powerful doctors. Agua florida or agua de colpas [i.e. water from jungle clay licks, which is rich in nutrients] may also be added.

The patient must approach in a sacred manner, in prayer that his needs will be met, and with the intention that they will. The shaman then pours the water over his head and lets it run down his body, also blowing him with smoke to purify him, or with perfume so he will flourish.

Sometimes the patient turns as this is happening – first to the left [in a circle, anti-clockwise], then to the right [clockwise]. The first turn is to get rid of negativity; the second to draw in positivity.

The bath takes place on the bank of a river so the energy that is removed will find its way to the sea [i.e. be taken away completely].

What Plants are Used in Baths?

Floral baths do not contain large numbers of plants. Specific plants or flowers are chosen instead according to the patient’s ailment.

I begin by cooking up good smelling plants from the forest, and to that essence I add a little alcohol and a little agua florida. Then I get flowers and mash them and add that juice to the mixture and put it into bottles. When I do this, I diet and refrain from eating salt, etc. You can either have a one-off floral bath or you can have a series of them for a deeper and more thorough effect.

A common reason for people to want to take floral baths is that something is not going well for them – like, for example, they can’t get work or they are having bad luck. First I give them a cleansing bath to take away the saladera [bad luck] which is shows up as salt on their skins. In that bath I put ajo sacha, mishquipanga, ruda and romero [rosemary]. Then the floral bath follows to give the things the client wants: luck, work, etc.

Can You Give Examples of Other Baths and What They are Used For?

For changing luck, mocura is used and the patient will find that after a couple of weeks, things have changed. For example you may find the job you were looking for, or where your life felt stuck or turbulent there is some momentum; things start to shift. Mocura is also used for clearing negative thoughts and feelings sent to you by others.

For cleansing the spirit, the dark red leaves of pinon colorado are used to undo sorcery and harm. This plant is also used in steam baths and when this is done you can actually see the phlegm, which is the bad magic, appear on the patient’s skin as it comes out of the body.

For flourishing or blossoming, bano de florecimiento plants are used. These help us to connect with and draw upon the strength and courage within ourselves, to overcome obstacles, and to lead a purposeful and productive life in accordance with our soul’s intention. The mixture for this bath is agua de colpa water from a place in the forest where pure rainwater collects. Often hunters drink this water as well to attract the animals.

To this is added albacca, which is a plant used widely in Peru for its strong, sweet perfume. It is used instead of an aerosol spray to freshen a house and is also placed on corpses during funerals. From a floral bath perspective, it attracts lots of friends and positive outcomes. It is also used medicinally for gastritis, appendix, or gall bladder problems, in which case you can take it as a tea. Menta [mint] is also added to freshen and re-vitalise the bather. Menta is also good for calming the nerves and releasing worries and preoccupations.

When the person bathes, all of these plant qualities are absorbed by the skin and the spirit.

Ross Heaven is a therapist, workshop leader, and the author of several books on shamanism and healing, including Darkness Visible, the best-selling Plant Spirit Shamanism, and Love’s Simple Truths.

28 Beauty Ingredients Made from Gluten