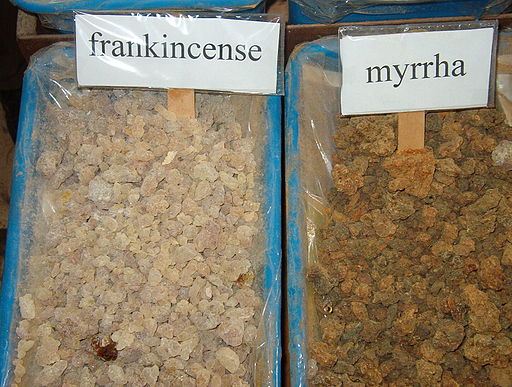 For most Westerners, their only knowledge of frankincense and myrrh comes from the biblical tale that they formed two of the three gifts (the other being gold) given by the wise men at the birth of Jesus. Little do most realize, however, that at the time Jesus is thought to have been born, these two gifts were highly prized and were considered far more valuable than mere gold.

The Hardy Tree and its Tears

The Frankincense tree, or Olibanum, upon first glance, may seem rather unremarkable. It appears as a giant shrub, with many knurled branches topped with abundant slender leaves and occasionally, small white flowers. A native to northern Africa, it looks like it belongs in the desert, growing in some of the world’s harshest conditions. But it is not the tree itself, but rather its sap that has such profound lore surrounding it. When the tree’s bark is pierced with a knife (known traditionally as a ‘Mingaf’), a milky-white oleoresin is exuded – thought the tree is not harmed. The resin forms droplets known as ‘tears’ or ‘pearls’, which harden into the orange-brown gum known itself as Frankincense. The English name of this natural incense is derived from the medieval French ‘franc’, meaning ‘pure’ or ‘free’, and from the Latin ‘incensium’, meaning ‘to smoke’.

Frankincense and myrrh have been valued for their aromatic properties throughout the ages. As long ago as 1000 BCE, there was extensive trade in both throughout the ancient world. As the trees from which both resins are obtained are native to only small regions of the world, this high demand linked with limited availability meant that frankincense and myrrh were, at this time, worth much more than their weight in gold.

Frankincense (also known as olibanum) is an aromatic resin obtained from species of shrubs (Boswellia thurifera, B. sacra or B. carterii) native only to north-east Africa and the Red Sea region. The name ‘frankincense’ is probably derived from the phrase ‘incense of the Franks’, after the Frankish Crusaders who introduced it to Europe. The word ‘olibanum’ is thought to be derived from the Arabic ‘al-lubán’ (‘the milk’).

Frankincense resin is collected by making incisions into the bark of the tree. The thick milky-white liquid obtained then solidifies into pea-sized ‘tears’, which are amber in colour. The tears and essential oil (obtained by steam distillation of the tears) are still widely used today, in incense, perfumes and aromatherapy.

The warm, sweet, rich resinous fragrance of frankincense made the resin an extremely desirable commodity, and it was popular throughout the ancient world, in Babylon, Assyria, Egypt, Persia, Rome, Greece and China. The earliest recorded mention of frankincense is on a 15th century BCE Egyptian tomb.

Although frankincense is not used today in Western medicine, historically it has been attributed with a range of medicinal properties: hemlock poisoning, cancer, vomiting, dysentery and fevers are some of the illnesses for which frankincense has been recorded as being used. In China, frankincense is still used widely as part of traditional Chinese medicine.

Frankincense also has a role in aromatherapy and is often described as a rejuvenating essential oil. The aroma of frankincense, once inhaled, is calming and helps clear the head; it is a popular essential oil for use during prayer and meditation. Inhalation of the aroma can also be useful in dealing with many of the symptoms of distress and panic and stress-related disorders. Steam inhalation can also be helpful in respiratory ailments such as laryngitis, coughs and catarrh.

Aromatherapy massage using frankincense essential oil in a carrier oil, on the face, neck and scalp, can be used for skin care (especially for mature skin), acne, abscesses, scars and wounds, and may also provide effective relief for tension headaches. A warm bath containing a few drops of frankincense oil helps counteract the effects of nightmares and sudden fears.

Myrrh is a red-brown resin with a bitter taste (its name derives from the Hebrew ‘murr’ or ‘maror’, meaning bitter) obtained from a species of tree (Commiphora) native to Somalia and the eastern parts of Ethiopia.

Like frankincense, myrrh is collected by making incisions into the bark of the tree. The gum that oozes out hardens into dark yellow-reddish tears, which together with the essential oil (also obtained by steam distillation of the tears) are widely used in incense, perfumes and aromatherapy.

Myrrh has a warm, rich, spicy balsamic odor that is sometimes slightly bitter, and was, like frankincense, an extremely valuable commodity during ancient times. It was mainly used in the embalming process, to delay the decay of the body and to mask the noxious odours. Like frankincense, myrrh was often a component of the incense used in religious ceremonies. These associations, together with its bitter taste, meant that myrrh came to represent death, suffering and sorrow. Legend has it that the fire on which the phoenix would die and then be reborn was fueled by myrrh and other spices.

During biblical times myrrh, both as a powder and as the essential oil, was also used in expensive perfumes.

Medicinal Action and Uses Myrrh has been attributed with many medicinal uses. In ancient times it was used for cleaning wounds and, as late as the 19th century CE, it was being administered as a treatment for coughs, colds, sore throats, halitosis, gum disease and gonorrhoea.

Myrrh resin has since been shown to be anti-inflammatory, antifungal, antimicrobial and antiseptic, and is still used today in mouthwashes and toothpastes, and in a number of liniments and healing salves for minor skin problems.

Until morphine and other painkillers were introduced, myrrh was a common analgesic. Myrrh is nowadays used as a constituent in some cosmetics, and as a flavoring in foods.

Frankincense and myrrh, prized for their fragrances since ancient times, can both claim significant places in the long history of fragrance. Despite their age, these aromas still have an impact on our lives, and will continue to do so for years to come.