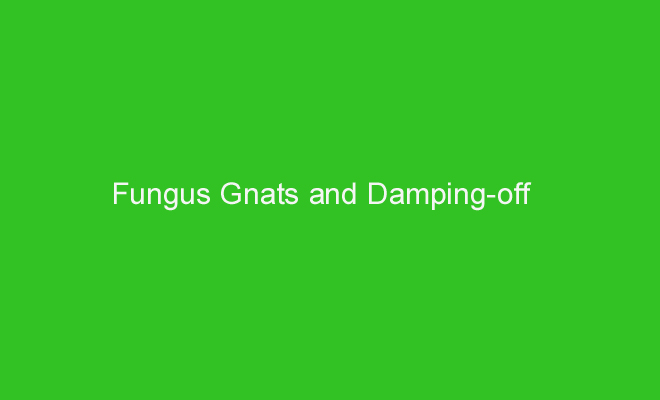 Late winter and early spring is a great time to start seedlings and get the gardening season underway. Growing your own seedlings from seed is highly rewarding and can open doors to even more species that are not often found in garden centers. However, a couple of problems can sometimes curb the indoor green thumb and seriously affect the success of growing seedlings. Fungus gnats and damping-off are two afflictions that commonly affect gardeners. However, before you spend money on expensive chemicals, the solution to these problems may actually be much more low cost that you suspect.

These tiny, black insects seem innocuous enough as they buzz over your plants. While the adults rarely cause any problems to plants, if the young larvae are in large numbers, they can damage your seedlings. Fungus gnats search out moist soil in which to lay their eggs. When the eggs hatch, the larvae will feed on the roots of your plants. Healthy seedlings will often be able to withstand this feeding but any seedlings that have small root systems like onions and leeks and those that are showing symptoms of nutrient stress can be put back quite significantly.

The easiest way to prevent fungus gnats is to water your plants properly. Over-watering, which causes your potting mix to remain moist for extended periods of time, seems to attract fungus gnats. If your plants are already infected, allow the soil to dry out between watering. Alternatively, sprinkle a ¼” of sand on top of your soil to confuse the adults. Since the sand drains water quickly, it can sometimes trick the adults into thinking the soil is dry.

If the problem is reoccurring for you, think about switching from a peat-based mix to one that only contains perlite and vermiculite. Lastly, if the adult fungus gnats are bothersome, trap them by making your own sticky trap. The adults are attracted to the color yellow. Make your own sticky trap by smearing Vaseline or Tanglefoot on a yellow surface and hang it up close to where the adults congregate.

Not only will controlling your watering help to prevent fungus gnats, it will prevent the second most common problem, damping-off. This condition is caused by several fungi such as Phtophtora and Pythium. These fungi live at the soil line, just where air meets the moist soil surface.

When your potting soil is kept continuously moist by over watering, the fungi attack your seedlings. The telltale symptom is a constricted stem, just at or below the soil surface. Once seedlings are infected, they tend to fall over at the soil line.

As mentioned, allowing the soil surface to dry out will go a long way in preventing this problem. If, for some reason, your potting mix remains wet for an extended period of time, look to your kitchen cabinet to help prevent the disease. Cinnamon powder is a natural fungicide and has been shown to be particularly effective against damping-off. In addition, Weak chamomile tea (after it has cooled) is another natural fungicide.

Ensuring seedling success need not be complicated or expensive. Controlling your watering and a few home made remedies will go a long way to guaranteeing healthy seedlings.

Arzeena Hamir is an agronomist and President of Terra Viva Organics. Grow a healthy, pesticide-free garden for you and your family.