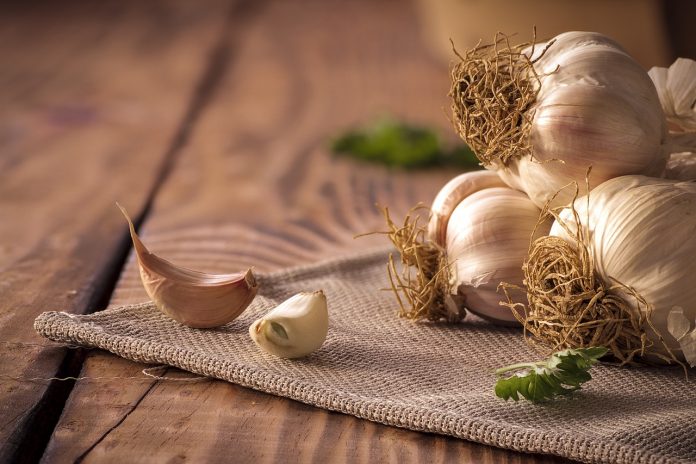 The plant has leaves which are long, narrow and flat like grass. The bulb is of a compound nature, consisting of numerous bulblets, known technically as ‘cloves,’ grouped together between the membraneous scales and enclosed within a whitish skin, which holds them as in a sac.

It is referred to by different names in Ayurveda. The names describe its qualities. It is known as Rasona (Rasena vunaha = as it is devoid of amla rasa or sour taste) Ugraghandhi ( ugra Gandhi = as it has strong pungent smell ).

It has Snigdha (sticky), teekshna (penetrating) , pichhila (slimy), guru (heavy), sara (quickly spreading) qualities. It has all rasas (tastes) except amla (sour). It reduces kapha and vata but it should be used with lot of precautions in persons who have pitta prakruti and in patients who are suffering from rakta, pitta disorders.

Ancient greeks used to place garlic on stones at cross roads as a supper for Hecate (Greek goddess of the three paths, guardian of the household, protector of everything newly born, and the goddess of witchcraft). According to Pliny, garlic and onion were invoked as deities by the Egyptians while taking oaths.

According to a Mohammedan legend ‘when Satan stepped out from the Garden of Eden after the fall of man, garlic sprang up from the spot where he placed his left foot, and Onion from that where his right foot touched.’

Garlic contains pungent, volatile, essential oil. This oil is a sulphide of radical Allyl. The intensely smelling allyl compound has such a diffusive property that even when the crushed bulb is rubbed onto the soles of the feet, its odor is exhaled by the lungs after some time.

Acharya charaka has said that garlic is an effective remedy in conditions like intestinal worm infestations, skin disorders, low libido and erectile dysfunction.

Many marvelous effects and healing powers have been ascribed to garlic. Garlic is popularly known as “nature’s antibiotic “. As an antiseptic, its use has long been recognized. It is very effective against fungus, yeast and viral infections. It is said to prevent anthrax in cattle, being largely used for the purpose.

Garlic reduces increased kapha. Garlic syrup is an excellent medicine for asthma, hoarseness of voice, coughs, difficulty in breathing, and most other disorders pertaining to the lungs. As this promotes expectoration it is very useful in chronic bronchitis. Garlic is a very good remedy for whooping cough.

As a Cholesterol Reducing Agent:

Many publications have shown that garlic supports the cardiovascular system. According to them it lowers cholesterol and triglyceride levels in the blood, inhibits platelet stickiness and slows blood coagulation. It is mildly anti-hypertensive and has antioxidant activity.

Garlic is considered as one of the most effective remedies to lower blood pressure. It eases the spasm of small arteries and reduces the pressure on them.

As a Remedy in Digestive Disorders:

Garlic stimulates peristaltic action and the secretion of the digestive juices. It eliminates body toxins. It has an antimicrobial effect and is an excellent remedy for intestinal infections. It expels intestinal worms.

As an Anti Inflammatory:

Garlic has anti-inflammatory properties. It is effectively used to cure arthritis, migraine and other inflammatory conditions.

Few studies suggest that eating garlic regularly reduces the risk of esophageal, colon and stomach cancer. This may be partly due to garlic’s ability to reduce the formation of carcinogenic compounds.

Garlic as an Aphrodisiac:

Garlic is said to be a tonic for impotence. It also treats sexual debility caused by over indulgence in sex and nervous exhaustion. It is said to be very useful in older men.

Garlic has always been known as an aphrodisiac. It can improve blood circulation significantly. According to recent studies an enzyme called nitric oxide synthase (NOS) appears to be responsible for the mechanism of erection. Researches on garlic have shown that garlic can stimulate production of this enzyme.

New research shows that consuming garlic during pregnancy can reduce the risk of raised blood pressure in pregnancy (Pre-eclampsia). Studies have shown that garlic may help to boost the birth-weight of babies.

Action of Garlic in Herpes:

In the future garlic may find its place in treatment of genital herpes. It was found that the oral or topical application of garlic or garlic extract markedly reduced the outbreak of the genital herpes virus.

1. Used in cookery it is a great aid to digestion, and keeps the mucosal coats of the stomach healthy.

2. A clove or two of garlic, pounded with honey and taken two or three nights successively, is effective rheumatism.

3. Grind few cloves of garlic and pour ¼ cup of boiled water on it. Add this infusion to sugar syrup. This is an excellent cough expectorant to children and elderly adults.

4. When sniffed, it greatly helps in relieving hysteria.

7. 10 drops of garlic juice with 2 teaspoon of honey reduces the acuteness of asthmatic symptoms. It can also be administered at the time of attack.

9. Half a clove of raw garlic consumes each day can increase body activity to dissolve blood clots, thereby preventing heart attacks and strokes.

Some may experience heartburn and flatulence when they consume garlic. Individuals who are consuming anti coagulant drugs should consult their dietician before consuming garlic products as garlic has anti coagulant property. It should be used cautiously by individuals who have bleeding disorders. Garlic should never be consumed during migraine headache. Avoid rubbing garlic on skin as it causes burns and peeling of skin.

Dr. Krishna. R.S has been an Ayurvedic Practitioner for 19 years, after getting a graduation degree in Ayurveda (Bachelor of Ayurvedic Medicine and Surgery) in 1986 from University of Mysore, India. He completed his post graduation diploma about allopathic medicine and surgery from University of Bangalore, Karnataka, India. His articles about Ayurveda and life sciences have been published in many magazines.