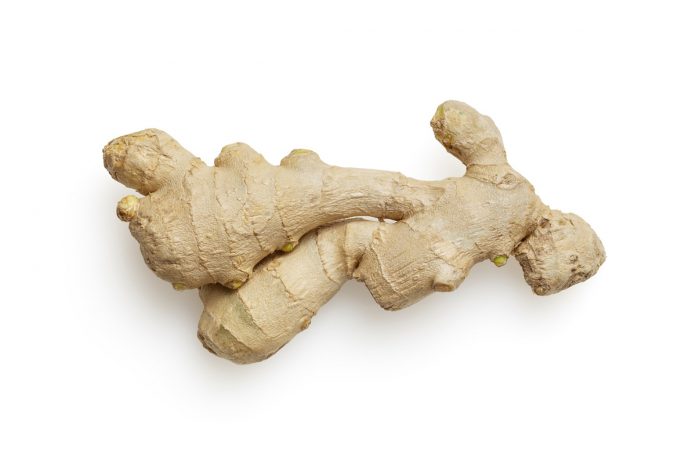 Ginger is a tropical plant native to Southeastern Asia. The rhizome, or underground stem, of the Zingiber officinale plant is prized for its pungent aroma, spicy taste and medicinal qualities. Ginger lends its name to its family, the ginger family, Zingiberaceae. Used since ancient times ginger was brought to the Mediterranean by spice traders in the first century A.D. and it spread from there across the globe to the West Indies, Mexico and South America. Today, hundreds of thousands of tons are produced each year in India, China, Indonesia, Nepal and Nigeria, with India producing the largest amount.

The ginger plant is an herbaceous perennial plant with leafy stems that grow about three feet tall. Linear leaves from six to twelve inches long alternate up the sheathed stems. Flowers grow in terminal clusters, each having a bract and consisting of yellow-green and purple petals. Some Asian cuisines make use of the leaves as they have a more delicate, less pungent taste and aroma compared to the rhizome. Cultivation is through root cuttings and the plant is not allowed to go to seed.

Harvesting ginger is simple. Plants are pulled up and the rhizome is separated from the flower and leaf stalks. The rhizome is scraped clean and dried in the sun, which effectively kills the root so that it does not sprout. The dried rhizome is irregular in shape with a tough, fibrous covering over a soft, moist interior.

To use ginger in cooking the outer brownish-yellow layers are peeled away from the light-colored center. Fresh moist ginger is cut into matchsticks, finely diced, shredded or grated and added to many dishes. As a spice ginger is used in both sweet and savory dishes, including breads, rolls, cakes, cookies, biscuits, chutneys, desserts, fruit dishes, meat dishes, pickles and poultry. Coffee and tea may be spiced with ginger, especially during the cold months. Ginger is an essential ingredient in ginger ale and ginger beers. Ginger stores well in a plastic bag under refrigeration.

Powdered ginger is ground from the dried rhizome. Ginger powder can be substituted for fresh ginger when it’s not available, although the taste is more subtle. Use 1/6 of the amount of fresh ginger when using ginger powder. The powder is typically called for in recipes for gingerbread and other baked goods and beverages.

Ginger contains about 2% essential oils with zingiberene being the main component. Rhizomes are distilled to collect the essential oil for use in the food and perfume industries. Components in the essential oils have been shown to increase motility of the gastrointestinal tract which helps with digestion. Other important characteristics of essential oil of ginger include analgesic, sedative and antibacterial properties. Since ancient times people have used ginger as medicine to drive away colds, cure a sore throat, tame a hoarse voice, as a carminative to aid digestion, to settle the stomach, and to disguise the taste of medicines.

Although ginger is generally recognized as being safe it promotes the production of bile, so people with gallstones should avoid consuming too much ginger. Interactions with other medications are rare, but ginger does interact with a common blood thinner, warfarin. Ginger has blood thinning and cholesterol lowering properties that may warrant further study.