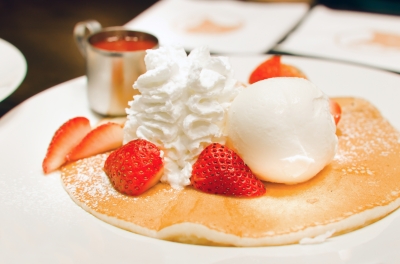 Why does it have to be one or the other? Me, I want it all and this gluten free pumpkin pancakes recipe with cinnamon syrup is a definite treat with a few tricks thrown in.

What better treat than light and luscious pancakes that have all the flavor of pumpkin pie? And as for the tricks, they are not only gluten free but refined sugar free and have a secret addition of fiber and Omega 3 oils from flaxseed meal.

Since the kids (and let’s be honest, the adults too) will probably be in sugar-overload later in the day, head off sugar shock by making your own syrup by heating some Wholesome Sweeteners Organic Raw Blue Agave nectar with cinnamon.

Why wait until Halloween night to start the festivities? Kick the day off with a little fun by adding some orange food coloring to the pancakes and black food coloring to the syrup. Top your orange pancakes with some creepy, inky black syrup and a spider or two. Gross! And yummy! Be warned though – the syrup will turn the inside of your mouth black for a little while. Gross! And cool!

You want to cook these pancakes on a lower heat and for a bit longer than regular pancakes to ensure the eggs are cooked through. These pancakes are delicate so don’t make them too big or they might break – 1/4 – 1/3 cup of batter will do the trick.

For a extra creepy treat you can let the syrup boil for a minute or two and then sort of pipe in on the pancakes after it cools in spider webs or Jack O’Lantern faces.

I hope your Halloween is filled with lots of treats and fun little tricks!

Place the egg whites in one mixing bowl and the yolks in another. To the bowl with the yolks add the remaining pancake ingredients. Beat the whites with a handheld mixer until stiff peaks form. Beat the yolk/pumpkin mixture until well combined. Take a large scoop of the egg whites and stir them into the yolk/pumpkin mixture. Fold the remaining whites into the mixture until no longer streaky.

Combine the syrup ingredients in a small, heavy bottom saucepan and heat just until bubbles start to form around the edges of the pan. Do not boil.

I’m Carol Kicinski. A professional recipe developer, food writer and TV chef – and I do it all gluten free! For a Gluten Free Diet,Gluten Free Recipe. I create Gluten Free Recipes that are simple and healthy and not just “good for Gluten Free” but just plain GOOD ! Enjoy! xo, Carol