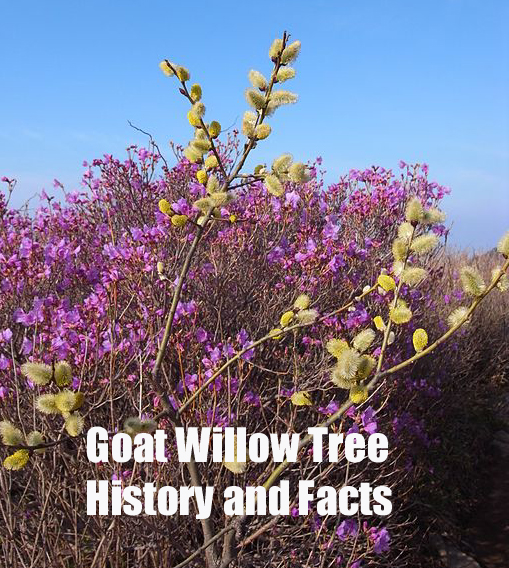 Goat willow, botanically named (Salix caprea), is a deciduous tree that’s native to the United Kingdom, large parts of Europe and some parts of Asia.

It is a broad leaf tree and can be found in hedgerows, woodlands and scrub as well as damp, open grounds such as beside streams, canals and lakes.

Several species of willow are native in the United Kingdom and they often hybridise together, which makes it difficult to identify each one. Goat willow trees commonly hybridise with grey willow (Salix cinerea) and the two are closely related. 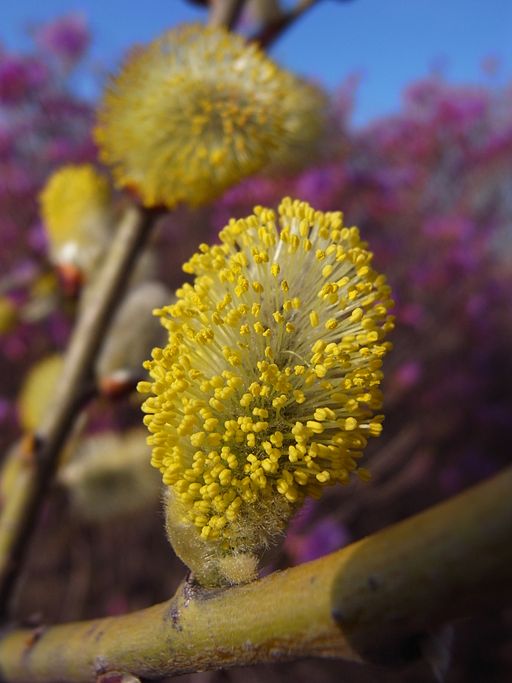 A mature tree will grow up to 10m tall and will usually live for around 300 years.

It has brown to grey bark which develops diamond fissures with age. The twigs are hairy when young, but soon become hairless and can sometimes appear yellow to red in the sun. Dissimilar to other willows, leaves are circular instead of being thin and long. These are hairless on the top, but have a coating of fine, felty hairs on the underside with pointed tips that bend to one side or another.

The tree is dioecious, that means male and female reproductive parts (flowers) are located on different trees, during spring. The grey, oval shaped, male catkins turn yellow when full with pollen. The green female catkins are slightly longer and turn into woolly seeds, once pollinated by wind. The tree can propagate itself by lowering its branches to the floor, which then grows roots.

Interesting fact: some species of willow, including goat willow and grey willow, are sometimes called ‘sallows’. The goat willow tree can also be called ‘great sallow’ with grey known as ‘common sallow’. They can both also be called ‘pussy willow’ because of the colour of the male flowers, and the fact they resemble the paws of a cat.

Caterpillars from many moths feed on the leaves including the lunar hornet clearwing, sallow clearwing and the sallow kitten. The purple emperor butterfly also eats the foliage and is a main source of food for them.

How We Use Goat Willow

The timber from a goat willow is yellow and spongy. Dissimilar to other willows, the twigs break easy and are therefore unsuitable for weaving, but have traditionally been used to make washing line pegs. The foliage was also used for cattle food in the winter.

The tree grows very fast, but doesn’t live that long because of diseases such as willow anthracnose and watermark.