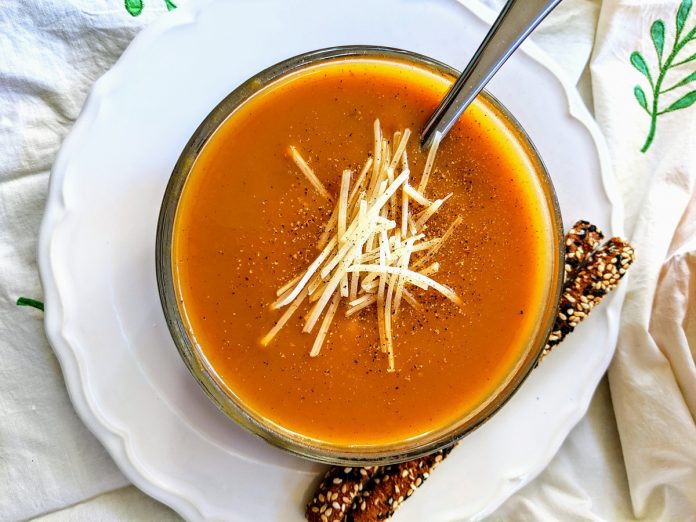 We came up with this dish when the parental units brought home enough squash and pumpkin to feed Iceland. They were EVERYWHERE in the garage, something had to be done! It’s a warm, fantastic winter soup. I also tried to stick with similar colored vegetables/spices, to keep the squash’s bright orange color.

Summer squashes are some of the most versatile vegetables, and they last forever. We keep ours in a colder place in the basement, and grab one whenever we want an easy meal.

Squashes come in an abundance of variations, including butternut, acorn, spaghetti, banana, and turban. The difference between a summer and winter squash are the season they are grown in. Summer squashes are actually the ones served during the winter, since they are grown in the summer months.

They aren’t limited to blending either. Squash make a fantastic side dish by simply cubing them and baking with salt and butter. Or, if you’re a little more motivated, you can grate one up and make a breakfast hash instead of using potatoes. Do you love pumpkin pie? Think about trading pumpkin for decadent butternut squash! The best part about doing so is you add minimal time to your recipe, but eliminate the canned pumpkin!

Using a sharp knife, take the skin off the butternut squash. You might be able to get away with using a vegetable peeler, but I’m not coordinated enough for that! Cut it into cubes. They don’t have to be perfect, they’re going to be blended up anyway. Chop the bell pepper into strips and get as many seeds out as you can. If you’d like your soup to have a more red color, add more red peppers instead of orange.

Now, add everything into the crockpot (including the turmeric and paprika). Make sure you mix it so the cream and wine are swirled together. Turn it on high for about four hours. When you can stab a fork through a squash chunk, it’s done. Let the soup cool.

When you’re blending the mixture, you might have to do it in separate batches. We had to do it twice. Be very careful when blending it, if it’s very hot and there’s no release for the air, it can burn you quite badly. If it’s still hot when you blend, make sure you have a little opening on the lid!

Garnish with a little paprika, salt, and pepper! Enjoy!

Marjorie Gelso is a fitness coach and new recipe connoisseur. Their main goals are teaching portion control, fitness, and that yummy food can also be healthy!