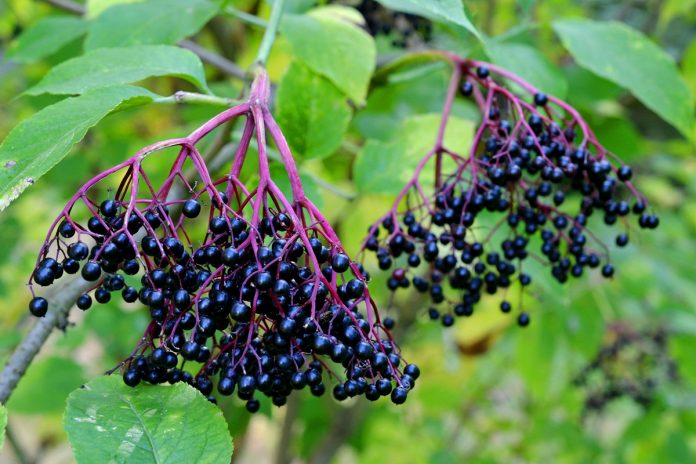 The Elderberry is a shrub, or sometimes a small tree, which was previously thought to have belonged to the honeysuckle family but has now been classified as a member of the Adoxaceae family. It is native to both, but more common in the North Hemisphere.

Some people believe that the Elderberry takes its name from an ancient Greek musical instrument, the sambuke, which was made from Elderberry wood. I am not sure, however, which bore the name first. Although the Latin name for the plant is Sambuca, the popular drink of the same name is not made from the Elder.

There is evidence that it was used as long ago as prehistoric times. Its cultivation in stone age villages in Italy and Switzerland was mentioned in the book ‘Magic and Medicine of Plants’.

Throughout history, all around the world, the Elderberry gets mentioned, not only for its curative powers, but also for its connections with witchcraft. During the Medieval Ages the Elder was thought to bring bad luck and must never be used for a baby’s cradle or be allowed to grow by the house. However, in later years, it became associated with good luck and was thought to dismiss evil spirits. It has always been a popular plant with the European gypsies and, in the book ‘Growing & Using Healing Herbs’, was referred to as the ‘medicine chest of the country people’.

According to Evelyn’s Herbal there is little that cannot be cured by the Elderberry.

The leaves of the Elderberry are opposite with usually between 5 and 9 leaflets. The leaves are dark green and have serrated edges. The plant will flower in late spring with large clusters of small, white or cream flowers and these are followed by the familiar dark berries which may be black, red or bluish. The plants have a long life span of up to 100 years.

Elderberries are not recommended for consumption as a raw fruit. This may cause vomiting and nausea as the raw berries contain cyanide. Severe poisoning by cyanide may cause death.