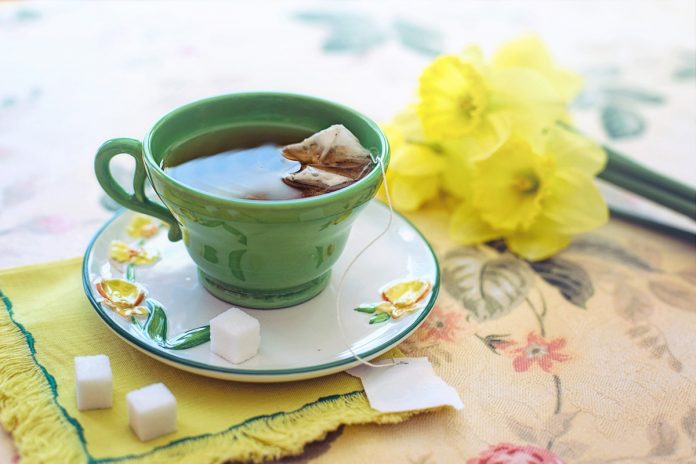 Did you know that your favorite afternoon pick-me-up or breakfast “cuppa” has a history that dates back thousands of years? According to legend, the Chinese Emperor Shen Nung “discovered” tea way back in 2737 BC when some tea leaves were blown by the wind into his pot of boiling water. Now, whether Emperor Shen was actually boiling water under that tea tree or not, the fact remains that tea has been a part of Chinese medical and dietary tradition for at least 1700 years. It is first mentioned in a manuscript dating to 340 CE. Sometime around 400, folks started adding other ingredients to their tea. Some popular additions were orange, ginger, spices and even onion and garlic.

In 479, Turkish traders discovered tea during trading along the Mongolian border. A little over a hundred years later, Buddhists monks returning to Japan in 593 carried seeds and leaves home with them, introducing the Japanese to the “Elixir of Immortality.” Japan, however, doesn’t begin to cultivate its own tea until nearly half a century later. Even then, it is rare, expensive and strictly for the aristocracy and high priests.

Between 960 and 1280, tea drinking becomes popular, first in China and then in Japan. Tea begins to lose its earlier, exotic flavorings. Tea becomes so important to Emperor Hui Tsung that he holds tea-making competitions and tea-tasting events. Supposedly, he becomes so obsessed with tea, he doesn’t notice when the Chins take over in 1125. Another invasion, this one by the Mongols, ended tea’s reign as the drink of the aristocracy. Tea drinking becomes commonplace among even the poorest peasants. Tea sets begin to be made of ordinary pottery and tea drinking rituals and porcelain sets are left to the rich and noble, as tea became a part of everyday life. In fact, the Mongols weren’t big on tea and tea drinking among the upper classes dies out, leaving the drink’s fate to the masses. In 1386, however, the Mongols fall out of power and tea again gains prominence in Chinese courts.

During the 1400’s Japanese Zen Buddhist priests refine the tea ceremony into its modern day from and tea takes on an elegant, almost religious atmosphere, becoming an art form of its own.

The 17th, 18th and 19th centuries are perhaps the most important time in tea’s history, as it becomes a player in both world societies and world politics. It isn’t until 1589 that Europeans even learn of tea, through the writings of a Venetian author. In 1610, The Dutch East India Company begins exporting tea from China to Europe. They market it as an exotic medicinal drink. Tea, however, is so expensive that, as in early China and Japan, only the wealthiest of the aristocracy can afford to buy tea and its serving pieces. By 1635, tea drinking has managed to catch on in the Dutch court, and during the mid 17th century, wealthy Dutch merchants’ wives are hosting tea parties. Tea becomes so popular across all the social classes that many fear it will be the ruin of family life. Ministers fearfully call for a ban on the stuff.

Tea makes its first appearance in the New World in 1650 when it is introduced through the Dutch colony of New Amsterdam. It arrives in England in 1657, where it is touted and sold as a health drink. By 1662, when the King takes a tea drinking Dutch bride, tea becomes so popular among the English that alcohol consumption actually sees a decline. Sometime in the 1680’s, Scotland is introduced to the delights of tea and by 1690 tea is being sold in the English American colonies. By the early 1700’s, controversies brew in Scotland and England over whether tea is overpriced, overtaxed, overly dangerous to one’s health and whether or not tea drinking will lead to society’s moral decay. Tea begins taking over Britain’s coffee houses, replacing coffee as the favored drink. The first tea shop is opened by Thomas Twining in London in 1717. Scandalously, both men and women frequent the tea shop. After the French and Indian War, Parliament decides to tax the British American colonies to help pay off debts accrued during the war. All of these taxes, except the tax on tea, are rescinded in 1770. Colonists decide to boycott tea purchases and in 1773 and 1774, “tea parties,” the most famous of which is held in Boston, are held throughout the colonies. Colonists in Philadelphia, New York, Maryland and Maine dump tons of tea into harbors. Parliament responds with the Coercive Acts, and the closing of Boston Harbor. They plan to reopen the harbor when the English East India Company is reimbursed for the lost tea. The colonists refuse and continue protesting. These protests eventually evolve into the American Revolution.

Meanwhile, back in Britain, tea consumption continued to rise. By 1785, 11 million pounds of tea were being imported. Tea drinking reaches 2 pounds per person in 1797. By 1807, the consumption rate would be 10 pounds per person. This is in part due to the fact that Parliament once again reduced import taxes on tea. Afternoon tea is “invented” by the Duchess of Bedford in 1840. Harrod’s Department store in London begins as a tea wholesaler in 1849. Tea and the British Empire become synonymous. The 1880’s, however, saw America become the world’s largest importer of tea.

The twentieth century saw the introduction of several tea innovations. Iced tea made its first appearance at the 1904 World’s Fair. Tea bags were inadvertently invented in 1908 when Thomas Sullivan, a New York tea importer, shipped tea to customers in silk packages. The customers steeped the entire package and praised him because his tea needed no straining. Today, Americans consume around 140 million cups of tea each day, with an estimated 80% of that as iced tea. Yet, surprisingly, it is still virtually the same brew as that of old Emperor Shen, way back when.