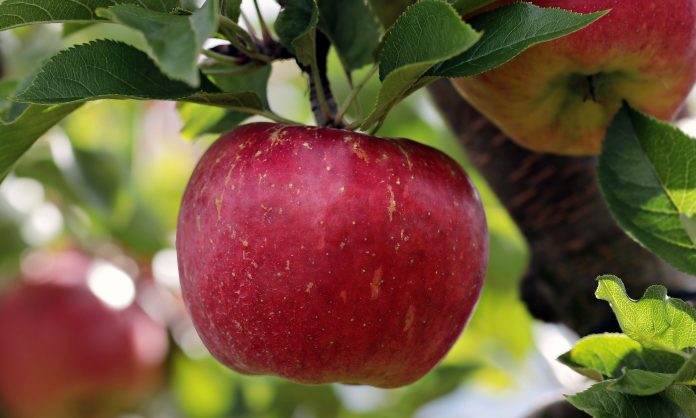 Apple trees were the most popularly grown fruit tree in colonial America and practically every settlement farm and backyard gardener planted this easily grown fruit tree, or easier, the seed of the apple could be planted to establish a permanent food supply. Growing these apple tree products could be eaten fresh or could be dried and preserved in many different ways to eat at a later time. Historical instances on the existence of apple trees are documented from folklore, legends, stone images on carved tablets, petrified slices of apples on plates for tomb offerings, and overwhelming numbers of references from Hebrew Bible scriptures and innumerable writings from poetry, songs, literary publications, and many other surviving accounts of all civilizations in the ancient world. One of the earliest archeological evidences of apple tree fruit comes from the remains of excavations from Jericho, Jordan, that has been dated 6500 BC by radio chemical analysis of carbon atoms.

The petrified remains of apple slices that were found in a saucer of an ancient Mesopotamian tomb, the burial site of royalty dates back to 2500 BC and was uncovered in southern Iran. In the ancient historical accounts of the fruit of the apple tree, there appears to be an incomprehensible trail of evidence that no other fruit could match. The interest shown in apples by the Greek and Roman philosophers, poets, historians, and literary masters was even extended to Renaissance painters, royal chefs to the Tsars of Russia and too many other references to mention.

In colonial America, apple trees were grown and planted from seeds in orchards by William Blackstone at Boston, Massachusetts in the 1600’s. Early documents on file at the National Library in Washington, DC suggest that all land owners in Massachusetts had begun growing apple trees by the 1640’s.

William Bartram, the famous explorer and botanist, wrote in his book, Travels, “I observed, in a very thriving condition, two or three large apple trees” in 1773, while traveling near Mobile, Alabama. It is important to realize that these large apple trees found growing in Alabama in 1773 could very easily have been grown from the seed planted by Creek Indians. Those seed may have been obtained by the Indians from American colonists on the Eastern coast of the United States at a much earlier time or from French farmers who settles in areas of agricultural land grants north of Mobile. General Oglethorpe planned in 1733 to plant “various plants, subtropical and temperate, which might prove valuable for Georgian farms and orchards,” according to William Bartram in his book Travels, published 40 years later. William Bartram’s father, John Bartram, trip to “East Florida” (Florida, Georgia, and the Carolinas) was, in part at least, an attempt to inventory the plant resources of England’s new acquisition—after expelling the Spanish from East Florida.

Many modern botanists believe that the improved apple that we know today descended from the crabapple that is commonly interplanted with apple trees for cross pollination. Old documents record that fact “cultivated apples descended from crab-tree or wild apple-Pyrus malus.” Wild crabapple tree seeds appeared on the list of collected seeds in the Plant List of 1783 of William Bartram and his father, John Bartram. In William Bartram’s book, Travels in 1773, he “observed amongst them (fruit trees) the wild crab (Pyrus coronaria) in his explorations near Mobile, Alabama. Robert Prince established the first operating nursery in the American colonies at Flushing, New York, in the 1700’s, where he offered apple trees for sale at his nursery that was visited by General George Washington, who later became the first President of the United States. President Thomas Jefferson was planting and growing apple trees at his fruit tree orchard in Monticello, Virginia, in the early 1800’s.

The legendary Johnny Appleseed was responsible for the rapid development of the apple trees growing and planting when he established a nursery in the Midwest that sold both apple trees and seed to be planted for growing into trees in the 1800’s. Over 2000 cultivars of apple trees are listed as being grown today, many of the trees resulting from the huge apple seed dispersion that was begun by the memorable ambition of Johnny Appleseed to entirely cover the landscape of America with the fruit of apple trees.

Over the centuries, apple trees became susceptible to many disease problems such as fire blight; however, Dr. C.S. Crandall from the University of Illinois performed several backcrosses that involved modern cultivars and the apple tree ancestor ‘crabapple,’ Malus floribunda. The wild crabapple contained an immunity factor within its genetic composition towards all major bacterial and fungal diseases of apple trees. In 1989, researchers from the pomology department at Cornell University extracted an immune fire blight gene from a nocturnal moth and transplanted it into an apple fruit, resulting in the total defeat of fire blight in that particular apple tree cultivar.

Fruiting of apple trees is perhaps the most troublesome characteristic experienced by an orchardist or a backyard fruit tree gardener. Most cultivars of apple trees require cross pollination of two separate varieties in order to set fruit on the tree.

It is necessary that the blossoms of the two apple tree flowers develop pollen at the same time, in order that fruit will be set, which can be a tricky problem to correct. The simplist solution to pollinate apple trees is to use the ancestor of the modern day apple cultivars, the crabapple, which sheds its pollen over a long period of time and easily overlaps the apple tree cultivar flowering period. Crabapple trees produce a fruit that is much smaller than the common apple, but it can be used in cooking in various ways, and it is loved by wildlife in the fall and winter when wildlife food is scarce for animals and birds. Crabapple trees are also valuable when used as flowering trees that begin blooming in early spring with huge clusters of pink, white, and even red blossoms. Several outstanding grafted flowering tree selections are available, such as: Brandywine, Red Perfection, Radiant, and Spring Snow.

Apple trees are easy to grow, and if a gardener purchases a large tree, he may experience fruit development even on the first year of planting and growing. The selection of the proper cultivar of grafted apple trees is extremely important, because even though the apple fruit can be grown in most areas of the United States, the trees require different amounts of chilling temperatures in order to flower. The interesting introduction of low chill cultivars from Israel makes it possible to experience apple growing and planting as far south as Florida. Certain popularly grown cultivars of apple trees in the United States today are: Arkansas Black, Gala, Granny Smith, Red Rome, Anna, Red Fuji, Yates, Golden Delicious, Red Delicious, Anna, Ein Shemer, and Golden Dorsett. Apples contain some mysterious quality that can preserve it from deterioration for centuries. Apple slices can be dried and kept delicious for long periods of time. This mysterious characteristic may be recognized by man’s association of paradise being connected and related to Eve and Adam picking apples from a fruit tree growing in paradise for their eternal pleasure, that was planted by God and described as the tree of life at the fabled Garden of Eden. We see this fruit of paradise recurs in the history of many other ancient civilizations. A similar account that we read as children in the book of Genesis from the scriptures in the Hebrew Bible.

Perhaps this mysterious genetic quality of apples in preservation makes it so important as providing medical benefits backed up by that memorable proverb, “an apple a day keeps the doctor away.” Experiments from researchers in California have shown that apple fruit is very rich in antioxidants, a biological compound that combats, stroke, heart disease, and many other health problems.

Patrick A. Malcolm, owner of TyTy Nursery, has an M.S. degree in Biochemistry and has cultivated apple trees for over three decades.