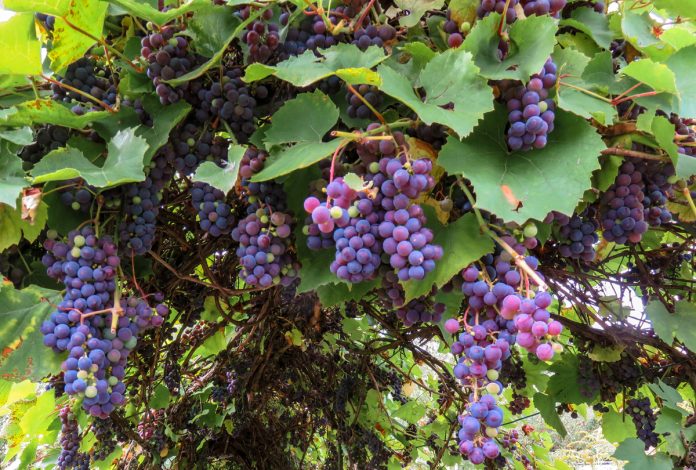 The first documentation of grapevines growing in the Americas was discovered in researching the logbook of navigator Giovanni de Verazzano, who reported in 1504 that a large “white grape” was vigorously growing at Cape Fear, North Carolina. The English explorer of the New World, Sir Walter Raleigh, confirmed in a letter to Arthur Barlowe in 1585, the discovery of a white grape (scuppernong), when he landed in coastal North Carolina.

The 1500’s ancient discovery of native grapevines growing in America was followed by numerous Spanish settlements along the coast of the United States where introduced old world grapevines were planted alongside the native American grapevines. That interplanting resulted in natural crosses of hybrid grapevines, a blending of the characteristics of both types. The French navigators were also exploring territories and lands surrounding Louisiana and were planting European grape vine varieties from the South of France, that also hybridized with native American grapevines. The English settlers established colonies in 1733 in Savannah, Georgia and Fort Frederica, on Saint Simon’s Island, Georgia, under General James Oglethorpe, who was the first Governor of Georgia. These English colonies brought in seeds of grapes from Europe that were planted and grown in small farm vineyards. Those transplants intermixed with native grapevines that grew in woods nearby, and this intermixing resulted in new grape hybrids that were spread by the Indians and colonists everywhere. It is believed that these hybrids produced some selections such as Concord, Niagara, Catawba, and others that were identified as growing naturally in the woods by the great American explorer William Bartram, in his book, Travels, as Vitis labrusca by botanists today.

Henry Laurens, who served as President of the American Continental Congress after the year 1755, lived near Charleston, South Carolina, and introduced olive trees, lime trees, everbearing strawberries, ginger, red raspberry, and blue grapes into the colonies to be grown for food. Henry Laurens was a good friend of John and William Bartram, the famous father and son, botanist explorers, and author of the book, Travels, in 1773. From Southern France, Henry Laurens introduced “apples, pears, plums, the white chasselas grape (vine) which bore abundantly.” Laurens claimed that he raised the fruit of the olive tree that he pickled and explained was “equal to those exported.”

When crossing the Saint John’s River in Eastern Florida, Bartram wrote that the “grape vines in this place were astonishing to behold.” He wrote that the grape was “small and ill tasted” but the strength and bulk of the vines could be imagined to pull the giant mighty trees down to Earth, but actually served to uphold the trees since the 12 inch wide vines twined up the trees and then “spread along their limbs, from tree to tree, throughout the forest.” In Alabama, Bartram wrote that the trees “were entangled with grape vines (Vitis campestris) of a particular species; the bunches (racemes) of fruit were very large, as were the grapes that composed them, though yet green and not fully grown, but when ripe they were of various colors, and their juice sweet and rich.” Bartram wrote that the Indians gathered, dried, and stored them (raisins) as provisions.

“Which ramble and spread themselves over the shrubs and low trees in these situations” and the Indians assured Bartram that the grapes would “produce fruit affording on excellent juice; the grapes are of various colours when ripe, of the figure and about the size of the European wine grapes”.

This grape that Bartram identified as European grape, Vitis vinifera, could very well have been a hybrid cross with an American native grapevine.

Because of the introduction of the European grapevines into America in the 1500’s, there was ample time for intermixing of species, so that taxonomists today have great difficulty of positively identifying a grapevine growing in the woods as a true native. There is a high probability that wild grapevines contain genetic components of European inheritance

Prince Nursery of Flushing, N.Y. Was established as the first American Nursery in 1737 and Robert Prince advertised “Lisbon and Madeira grapevines for sale, Vitis vinifera.” It was interesting to note reports that Prince was unsuccessful in attempts to grow vines of wine grapes (European) due to “his inability to control a deadly fungus.” It is probably that Prince thought the problem was a fungus, but most likely the problem was a pest, phylloxera, that was a small lice-like creature that ate the roots of European grapevines, Vitis vinifera, and once American grapevines were exported to Europe, most of the vineyards growing there were destroyed.

George Washington built Mount Vernon as his home in Virginia in 1754, where he planted extensive orchards and vineyards from which he picked grapes and dried them into raisins. They were a ýStaple at the dinner tableý of George Washington.

Thomas Jefferson planted extensive European grapevines at his vineyard at Monticello, Va., in 1807, but like many other gardeners and wine makers, he failed when all the vines died of phylloxera, but he replaced those vines with the native American alternative grapevine, scuppernong, Vitis rotundifolia.

Perhaps no other group of plants is known better than the plant tribe of grapes. The grape is known more for its ability to transform into wine, than for its desirability as a table grape or a desert grape. Some grapes contain so much sugar inside the skin, that they will not ferment in on the vine after ripening, but will turn into a raisin. The unique aesthetic quality of the grape is the capacity for producing juice. The juice may be used fresh or fermented into famous vines with distinctive aromas and flavors increasing into quality with aging, some lasting for centuries. The Roman wine makers put floating olive oil in the wine bottles to prevent the wine from oxidizing and fermenting further into vinegar.

Luther Burbank, the great American hybridizer in his 8 volumes of Fruit Improvement, made grape selections by hybridizing over 100,000 species of American grapes with European grapes and other species that he imported from various countries. Burbank’s inventive work on grapevines demonstrated that the characteristics of grape production, taste, and many other factors can show great variations, depending on climate, conditions, and soil changes. He imported muscadine vines, Vitis rotundifolia, from the Southeastern United States where they flourished, but these grapevines were not satisfactory growers when planted in California.

Burbank spent considerable effort in hybridizing American grape species with Tokay grapes from Hungary and the ancient Syrian grapevines of the Bible. Burbank also imported the Thompson’s white seedless grapevines in 1880 into California to hybridize with American grapevine species. He found it was an extremely productive, light-colored, strong-growing, yellowish white grape “that grew well in California vineyards.”

Patrick A. Malcolm, owner of TyTy Nursery, has an M.S. degree in Biochemistry and has cultivated grape plants for over three decades.