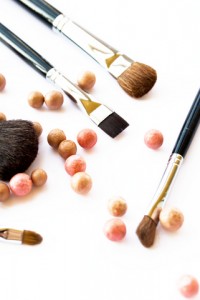 In the middle Ages, although its use was frowned upon by Church leaders, many women still wore cosmetics. A popular fad for women during the middle Ages was to have a pale-skinned complexion, which was achieved through either applying pastes of lead, chalk, or flour, or by bloodletting. Women would also put white lead pigment that was known as “ceruse” on their faces to appear to have pale skin.

Cosmetic use was frowned upon at many points in Western history. For example, in the 19th century, Queen Victoria publicly declared makeup improper, vulgar, and acceptable only for use by actors.

Actresses however were allowed to use make up and famous beauties such as Sarah Bernhardt and Lillie Lang-try could be powdered. Most cosmetic products available were still either chemically dubious or found in the kitchen amid food colorings, berries and beetroot.

The worldwide annual expenditures for cosmetics today is estimated at $19 billion.Of the major firms, the largest is L’Oréal, which was founded by Eugene Schueller in 1909 as the French Harmless Hair Coloring Company (now owned by Liliane Bettencourt 26% and Nestlé 28%; the remaining 46% is traded publicly). The market was developed in the USA during the 1910s by Elizabeth Arden, Helena Rubinstein, and Max Factor. These firms were joined by Revlon just before World War II and Estée Lauder just after.

Though modern make-up has been used mainly by women traditionally, gradually an increasing number of males are using cosmetics usually associated to women to enhance or cover their own facial features. Concealer is commonly used by cosmetic-conscious men. Cosmetics brands are releasing cosmetic products especially tailored for men, and men are using such products increase more commonly.There is some controversy over this, however, as many feel that men who wear make-up are neglecting traditional gender roles, and do not view men wearing cosmetics in a positive light. Others, however, view this as a sign of on-going gender equality and feel that men also have rights to enhance their facial features with cosmetics if women could.

During the 20th century, the popularity of cosmetics increased rapidly.[citation needed] Cosmetics are increasingly used by girls at a young age, especially in the United States. Due to the fast-decreasing age of make-up users, many companies, from high-street brands like Rimmel to higher-end products like Estee Lauder, have catered to this expanding market by introducing more flavoured lipsticks and glosses, cosmetics packaged in glittery, sparkly packaging and marketing and advertising using young models. The social consequences of younger and younger beautification has had much attention in the media over the last few years.

The 1920s make-up revolution really took off with the style of the flapper. the new heavy make-up look was a reaction to the demure Edwardian era and women were increasingly driven by marketing through cinema and advertising. The inventions of the 1910s of mascara, lipstick, eye-shadows, pan-sticks, powder compacts etc by leading innovators such as Max Factor, Maurice levy and TL Williams the founder of Maybelline were now to be found on dressing tables and women’s handbags all over the developed world.

The first half of the 1940s was consumed by efforts to support World War II. Many women went to work and had neither the time nor money to spend on the elaborate, romantic up to hairstyles of the ’30s. Makeup, too, was a luxury at that time so natural looks ruled the day.

Think of the long curling styles demonstrated by the movie stars of the time from Veronica Lake to Lauren Bacall.1940’s hairstyles are one of the most stylish hairstyles for women in the history of hair fashion. Perfectly styled, voluminous hair was the trend throughout the decade. The mid-1940’s had very complicated hairstyles, mostly to offset the the fabric rationing that impacted dresses.

Hairstyles that were popular during 1940s were the peek-a-boo bang, the top reverse roll, pin curls, side rolls, the up do, victory rolls, and even the pompadour. It takes patience and practice, but the result is very flattering and ultra-glamorous.

When you think of make-up styles from the 1950s, you think of Grace Kelly, Sophia Loren, Audrey Hepburn, Maureen O ‘ Hara and numerous other Hollywood stars. Quite simply, these women were not only fashion icons but beauty icons for women around the world. Their make-up looks defined the era, and it was without doubt the age of glamour ! beauty salons and powder rooms became hallowed sanctuaries for glamorous women.Pastels ruled in this decade, pale pinks, greens, blues and yellows, and if ever there was a color that showcased an era, it was the color pink for the 1950s. Audrey Hepburn once claimed that she ‘ believed in pink ! ‘ Peaches and cream and pink hues all call to mind the 1950s, both in feminine decor, dress and make-up rouge.

The base for the 50’s style makeup was a foundation cream, creating a pale, mask-like complexion which was topped off by patting on a flesh coloured powder to set it. Once your base was set, then “slowly, comes the metamorphosis”

The sixties was the ultimate time for make up. It was no longer strictly the domain of the adults; many cosmetic companies noted a huge increase in teenage customers.

This was inevitable with magazines like Vogue and Harpers Bazaar teaching step-by-step instructions to young ladies.

The main focus of the look had shifted from the 1950’s siren pout; it was all about the eyes, the bigger and rounder the better.

1970s fashion, which began with a continuation of the mini skirts, bell-bottoms and the androgynous hippie look from the late 1960s, was soon sharply characterized by several distinct fashion trends that have left an indelible image of the decade commemorated in popular culture. These include platform shoes which appeared on the fashion scene in 1971 and often had soles two to four inches thick.

Perhaps no other decade has epitomized decadence and chicness more than the 1970s. From super-straight hair to the Farrah Fawcett flip, the ’70s were all about self expression and glamor. Makeup was used for more than accentuating your features, it was used to make a statement. The ’70s style has made a return to popular culture in a big way, with celebrities bringing new life to some of America’s most popular vintage looks.

The beauties of the ’70s were tan, athletic and natural. Thanks to the rise of the feminist movement, women wanted to appear as unadorned as possible. By day, women may have been as strong and capable as TV heroine Wonder Woman, but at night, their makeup told a different tale of decadence and indulgence.

I am a makeup artist, who is passionate about interesting life in colors, makeup and beauty.

How You Sleep Affects Your Health – And Could Give You Wrinkles