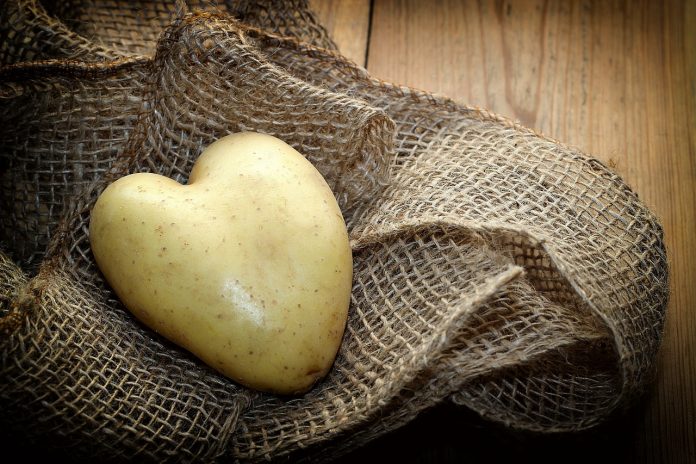 The potato, being rich in vitamins and minerals, has been a staple in homes and restaurants for centuries. Yet, the potato has had a torrid history. According to historians, potatoes originated in Peru and Chile and date the use of the potato back to a time before Christ. While digging through ancient ruins in Peru and Chile, archaeologists discovered potato remains. These remains dated back to somewhere around 500 B.C.

We know that the ancient Inca’s grew potatoes – and they also they worshiped the vegetable! The potato was such a cherished item, the Inca’s placed them along side their dead when buried, they stored them to use when needed during famines or in times of war, and dehydrated potatoes then stored them for traveling. They would then eat them dry or add them to stews prepared along the way.

At that time in the potatoes history, potatoes had purple skins. The flesh of these dark purple-skinned potatoes was yellow.

They became more widely know after 1532, when conquistadors invading Peru discovered the potato during their search for gold. The Spanish were pushed further out into the world in their quest to discover and obtain land and wealth, and Spanish explorer Gonzalo Jimenez de Quesada is credited with returning from his adventures not with gold but this amazing new food.

As his travels did not result in the discovery of abundant gold he needed to make good somehow. When he returned to Spain with the potato, he got busy proclaiming its value in maintaining human existence by providing nourishment. Later, potatoes were supplied to ships and it was found that sailors eating potatoes did not suffer with scurvy.

In 1597, British author Avid Gardener received potato roots (spuds) from Virginia. He was able to grow potatoes from the roots. Later, the author wrote a chapter about potatoes in his book, The Herball.

By 1600, the potato had reached Italy, England, Belgium, Germany, Austria and then France. The people of each country considered the potato weird, poisonous and even evil. The potato was said to cause death and illness, including syphilis, and some even feared it was the cause of sexual promiscuity. Officials in the town of Besancon, France are on the record as opposed the farming or growth of potatoes. They stated that the potato was the cause of leprosy. Lawmakers then forbid it from being grown in the town.

Famously, in 1589, Sir Walter Raleigh brought the potato to Ireland, now renowned the world over as some of the biggest potato eaters in the world. History tells us that Sir Walter Raleigh grew potatoes and presented a potato plant to Queen Elizabeth I as a gift. By the late 1800’s more than one third of the population of Ireland were entirely dependent on potato for their survival. When the humble potato became diseased after a bacteria was introduced from Europe about 25 percent of Ireland’s population died of starvation at that time. This period is referred to as the Great Famine and it changed Irish society forever.

Why did the potato become so popular the world over? It’s incredibly versatile, tasty and keeps pretty well, which was important way back before refrigeration. Here’s a tasty recipe for that classic staple dish, creamy mashed potato.

Wash the peeled, chopped potatoes until all dirt and grime is removed. Your water should be completely clear when the potatoes are clean. Place the chopped potatoes in a large pot on the stove. Make sure the water covers the potatoes completely. Bring the water to a boil. Allow the potatoes to boil for about ten to fifteen minutes. Drain all the water from the potatoes. Add the cream cheese and milk to your potatoes. Mix while also mashing until everything is completely combined. The texture can be smooth or, if you like, you can leave a few lumps in your mixture. Stir in the chives. Season the mixture with salt and pepper to taste. (Hint: adding the salt to your water will provide the seasoning needed and you won’t need to add more salt later. Doctors sometimes suggest it is healthier to add salt during cooking to decrease the impact on the body.) Serve with steamed vegetables and lightly pan-fried lean meat.

Chelsi Woolz enjoys cooking healthy and delicious food, loves finding new recipes, and is rather partial to mashed potato. She has a curious mind and loves digging up unusual facts and sharing them with other curious people. The potato famine story was right up her alley!