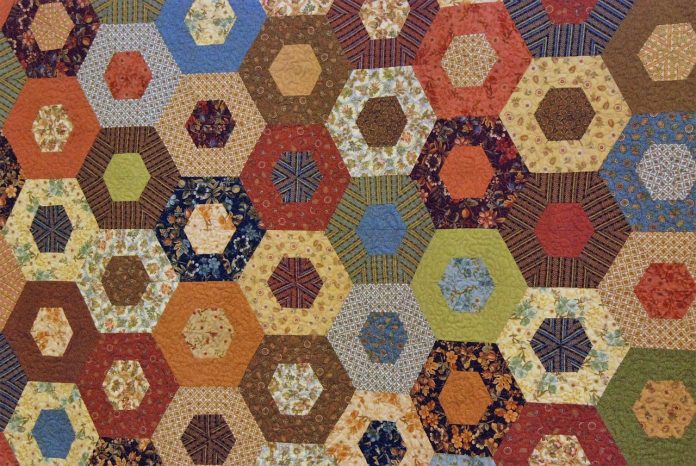 In the article, Medieval & Renaissance Quilting, quilt historian Lisa Evans wrote, “Quilted garments padded Crusader mail, quilted linens adorned Renaissance bedchambers, and quilted Evangelists were treasured at 15th century monasteries.” Quilting (stitching together layers of padding and fabric) is as old as ancient Egypt if not older and whole cloth quilts were very common trade goods in wealthy circles in Europe and Asia going back as far as the 15th century.

Piecing fabric together is also very old. It was more often used for clothing but also occasionally for decorative objects like this exquisite pieced pillow from the 15th century.

The making of pieced quilts made up of cut pieces of fabric sewn in block form with the blocks then sewn together to make the quilt is a more recent development. Pieced block quilts, often called patchwork quilt, did not become the dominant form of quilt making until the mid-19th century, and still is not the traditional form in Provence, Wales, and parts of India.

Quilt making was uncommon in America in the late eighteenth century and early years of the nineteenth. Most women were busy spinning, weaving and sewing in order to clothe their family. Commercial blankets or woven coverlets were a more economical bedcovering for most people. Only the wealthy had the leisure time for quilt making so Colonial Quilting was done by only a few.

Obviously quilts were not made of left over scraps or worn clothing as a humble bedcovering during this period. Instead they were decorative items that displayed the fine needlework of the maker.

Whole cloth quilts, broderie perse and medallion quilts were the styles of quilts made during the early 1800s.

Quilts made of a solid piece of fabric are referred to as Whole Cloth Quilts. The three layers of top, batting and backing were quilted together. The quilting itself became the decoration.

Both wool and cotton solid color quilts and white quilts were made during this period. The white ones are sometimes called “whitework”.

A few were made with a simple overall quilting design but many were works of art with beautiful quilting including feathers, flowers and other natural motifs. Some were made even more exquisite by a method called trapunto. Trapunto is the technique of slipping extra stuffing into certain areas of a quilt to bring out the quilting in that area. For example trapunto can make the area inside a feather or flower making that part of the quilt a little thicker. Women were proud of fine and even quilt stitches in these quilts.

Broderie perse refers to the applique of cut out motifs from printed fabric onto a solid background. This form of quilt making has been done since the 18th century. The popular printed fabric during this period was chintz imported from India.

Printed fabric was expensive even for those who were well off. By cutting out birds, flowers and other motifs from printed fabric and sewing them onto a large homespun cloth a beautiful bedspread could be made. The technique was also used on some early medallion quilts as in the example linked below.

Broderie Perse bedcoverings were usually used on the best bed or sometimes only when guests were staying in the home. See a beautiful example of broderie perse at the Quilt Index.

Progress in technology deeply affected the number and styles of quilts made during the middle years of the 1800s.

The industrial revolution brought about the most dramatic change as textiles came to be manufactured on a broad scale. This meant women no longer had to spend time spinning and weaving to provide fabric for their family?? needs. By the 1840s the textile industry had grown to the point that commercial fabrics were affordable to almost every family. As a result quilt making became widespread.

A great variety of cotton prints could be bought for the making of clothing and even specifically for making a quilt. Although scraps left over from dressmaking and other sewing projects were used in quilt making, it is a myth that quilts were always made from scraps and worn out clothing. Examining pictures of quilts found in museums we quickly see that many quilts were made with fabric bought specifically for that quilt.

Another major shift was in the style of quilts made. Although a few earlier quilts were made in the block style, quilts made up of blocks were uncommon until around the 1840s. With so many fabrics being manufactured quilters could create their blocks with a delightful variety of fabrics.

Some block style quilts were made of a set of identical pieced blocks while others contained a variety of blocks made with different patterns. The blocks were sewn together and a border may or may not have been added.

During this period the invention and availability of the sewing machine contributed to quilt making. In 1856 The Singer company started the installment plan so that more families could afford a sewing machine. By the 1870s a good many households owned a sewing machine.

One significant type of quilt made during this period were signature quilts. Indelible ink was available after 1840 making it possible to not only sign a quilt but to add inscriptions including poetry, personal messages or other information. The more elaborate autographs and inscriptions are seen most often in quilts made before the Civil War.

Friendship quilts had special meaning for those who were traveling westward as they could look at the quilt and remember friends and family left behind.

Baltimore album quilts originated in Baltimore, Maryland in the 1840s. These album quilts of lovely appliqud blocks were sometimes designed by the maker though in time patterns by accomplished designers were used as the popularity of this quilt style spread. They reflected the prosperous community of Baltimore as most were made not with scraps but with new fab.

If you want to know more about apparel_fashion,please visit