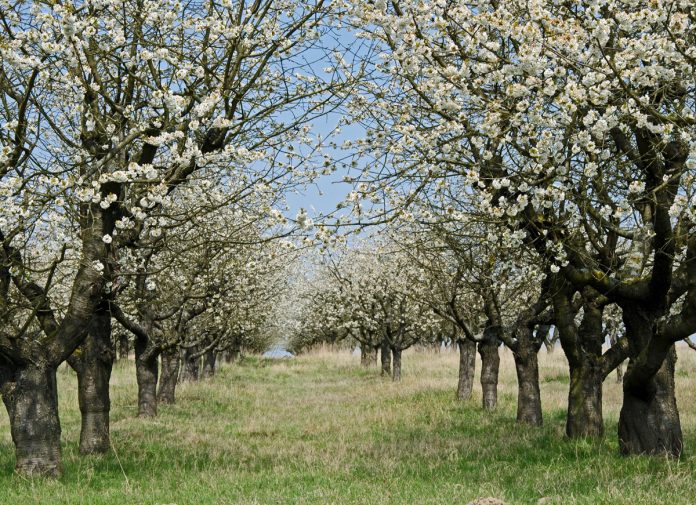 There are only a few instances in the ancient historical record concerning cherry trees. This absence in the record perhaps resulted in the fragile nature and perishability of the fruit, unlike the fruit from the apple tree. There are strong suggestions that the cherry tree originated in the territories of Asia Minor near the Black Sea and the Caspian Sea. Other suggestions that the cherry trees were used in the Greek and Roman cultures come from literary historians, and it appears that cherry wood from the trees of cherry was important in many professional applications for the ancients.

Among the fruit seeds that were sent in 1628 to the settlement at Plymouth, Massachusetts, by the Massachusetts bay Colony were cherry, peach , plum, filbert, apple, quince, and pomegranate and “according to accounts, they sprung up and flourished.”

William Bartram found bird cherry, Prunus padus, growing near Augusta, Georgia in 1773 as reported in his book, Travels, when he was taking an inventory of plants growing in the South after the Spaniards abandoned and ceded the land to the English.

Luther Burbank, two centuries later, believed that the bird cherry should be incorporated into the parentage of future cherry hybrids, because it was the most cold hardy cherry known; with its heavy bearing characteristics and its immunity to most insect and disease problems of the cherry trees already in commercial pipelines, it was the hardiest cherry tree yet.

Luther Burbank, in his extensive book, Fruit Improvement in 1922, combined characteristics from the Sand cherry tree, Prunus besseyi, with the American plum, Prunus chickasaw, and the Japanese plum, Prunus triflora, that ripened in California around mid-August. Burbank described the fruit as deep crimson in color, transparent flesh, rich sweet flavor, juicy and firm with a strong resemblance of the parental form of the American plum, Prunus chickasaw. This cherry-plum hybrid was able to withstand the cold and rigorous climatic conditions, even to the Dakotas.

Professor N.E. Hansen of the South Dakota Experiment Station developed and improved the Sand cherry, Prunus besseyi, that was marketed as the “Improved Dwarf Rocky Mountain Cherry,” with fruit growing as large as the Richmond cherry. Luther Burbank argued in his 1922 book, Fruit Improvement page 149, that this Sand cherry tree was more truly a plum tree.

Cherries are usually marketed with the stem still attached to the fruit. When canned or preserved, the stems are customarily removed from the cherry. Hybridizers such as Luther Burbank concentrated on improving several characteristics that were important in marketing the fruit: the size, color, flavor, and sweetness. Burbank produced one cultivar so rich in sugar and it hung on the tree, instead of the rapid decay, after ripening on the tree as experienced with most cherry cultivars.

Cold hardiness was considered to be very important in cherry tree hybridization and Burbank used the bird cherry, Prunus pennsylvanica, that had withstood temperatures of negative 60 degrees Fahrenheit near Hudson Bay as one parent of the cherry hybrid, since it was considered to be the most cold hardy of all cherry trees. In considering the many disease and insect problems that cherries experienced, Burbank suggested that hybridizers concentrate on breeding immunity genes into cherries to bypass “spraying and gassing.” Burbank is greatly admired for his strong environmental stand by modern day conservationists.

The common wild black cherry, Prunus serotina, is found growing in most of Eastern North America. The small cherries are grown in great abundance and are reliably produced in large crops, even in the coldest regions of the United States. There are efforts to hybridize the desirable genes of this cherry into existing clones of commercial cherry cultivars. The problem with this native cherry tree is that all parts of the tree and fruit contain the deadly toxin cyanogens, which have caused death and illness to children from cyanide poisoning in the fruit, even though birds don’t appear to be affected from eating the fruit.

Cherry trees in orchard situations grow 10 to 15 feet tall to manage the fruit harvesting properly, even though the can grow to 30 feet if not pruned. Cherry trees are very cold hardy down to negative 20 degrees Fahrenheit, and require approximately one thousand or more chill hours for an abundant fruit set. Pollination is not a great problem with cherry tree production. Rootstock selection for cherry trees is “Mazzard,” Prunus mahaleb, or “Gisela” or the recent Geissen, German rootstocks.

The principal cherry commercial fruits grown in the United States are the sour cherries, Prunus cerasus L., that make up 99% of all production. These cherries are important in baking cherry pies and cherry tarts, as well as in frozen fruit packs or in canning.

The most famous sour cherry is the “Maraschino” cherry that is used in cherry pies, cakes, juices, jams, jellies, mixed drinks, ice cream, and a host of other ways. This cherry is bright red in color and commonly seen on grocery store shelves in clear glass jars and bottles.

Sweet cherry cultivars, Prunus avium L., are increasingly in demand and sold at U.S. markets. Bing cherries are well known as a fresh fruit item. This cherry is dark purple-red and is firm and has excellent shipping qualities. Other important sweet cherries are ‘Napoleon’ and ‘Ranier,’ a USDA release that is bright red with yellow undertones in the background. The Lambert cherry is good to use in canning as is the Stella. The Black Tartarian cherry is a sweet cherry commonly available from mailorder and internet catalogs.

Cherries are rated high in antioxidant levels that offer great health benefits such as treating Gout. Many internet sites promote fresh cherry consumption as being the miracle cure and fast recovery from attacks of Gout. Some internet sites offer concentrated cherry extracts and powders of dried cherries as a cure. Cherries offer other health benefits in their high content of Vitamin A, Vitamin B1, Vitamin B2, Vitamin C, Niacin, and the minerals Calcium, Phosphorus, Iron, and Potassium.

Japanese flowering cherry trees are the most widely adapted and popular flowering tree growing in the United States today. The multi-colored flowers of Yoshino cherry, Prunux x yodoensis, and Kwanzan cherry are seen early in the season, and the buds open into clusters of abundant, long lasting flowers that dominate the landscape of our nation’s capitol , Washington, D.C. Japanese flowering cherry trees Prunus serrulata ‘Kwanzan’ were planted in Washington D.C. as a gift of the Japanese people to American citizens, largely through the efforts of President Taft’s wife, the first lady. Thousands of these Japanese cherry trees were planted, and many tourists flock to the Capitol in the spring to experience that flowering extravaganza. Cherry blossom festivals, celebrations, and get-togethers are held yearly in cities throughout the country, when cherry trees are in flower to crown “Cherry Queens” and to schedule beauty pageants.