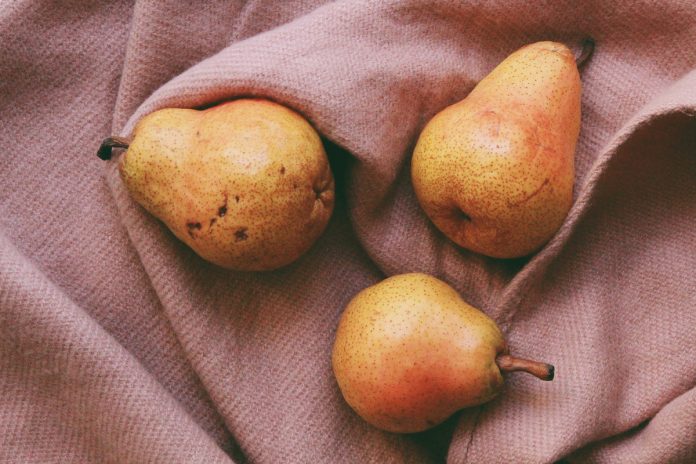 There is convincing archeological evidence from the excavation of the ancient lake dwellers in Switzerland that the European pear, Pyrus communis L., was known by that civilization. It is believed that the pear was known by prehistoric man, but there is no agreement on whether the apple came first or the pear. The ancient pear tree of Europe was fundamentally different from the Asian pear tree, Prunus pyrifolia.

English records show that in 1629 “stones of pears were sent by the Massachusetts Company to New England” colonists to plant and grow into trees at Plymouth, MA.

On March 30, 1763 the famous American, George Mason, made an entry into his extensive orchard journal: “grafted 10 black pear of Worchester from Collo… these are a large course (coarse) fruit for baking” and old French pear variety.

Fort Frederica at Saint Simons Island, Georgia, was established by the English colonists in 1733, at the same time the city of Savannah was settled. In order to enable the settlers with self sustaining food reserves, a plan was developed by General Oglethorpe to introduce trees and plants for growing both in temperate and subtropical climates that would prove valuable for future farms and fruit and nut tree orchards in Georgia. These objectives were reported according to William Bartram in his book, Travels, that was published in 1773, 40 years later. John Bartram, the father and travel companion of William Bartram, made their research trip to East Florida, Carolina, and Georgia partly to investigate resources and plant inventories abandoned by Spaniards to the English as colonial acquisitions.

Prince nursery was established as the first American nursery for the collecting, growing, and selling of plants and trees at Flushing, New York in 1737, Prince nursery advertised “42 pear trees for sale in 1771.”

John Bartram planted the seed of a pear tree in 1793, and this ancient tree grew and produced fruit until the year 1933.

The great American botanical hybridizer and writer of his epic and monumental 12 volume account of his observations on plant development over many years by Luther Burbank stated that basically, there were two genetic lines of pears that he and others had used to improve the commercial quality of pear trees and their fruiting. The European pear, Pyrus communis L., the Asian pear, Pyrus pyrifolia, also called the Korean pear tree, the Japanese pear tree, the Chinese pear tree, and the Taiwanese pear tree. These were intercrossed to obtain a recombination of genes to sift out the complex character mixtures that would hopefully produce superior fruit. Bartram wrote in his ‘Fruit Improvement’ about a pear chance hybrid that appeared at a farm near Philadelphia, Pennsylvania, a result of a European pear and the Chinese sand pear that had been planted on the farm as ornamental garden trees. This hybrid occurred on the farm of Mr. Peter Kieffer, thus bearing his name for the first hybridized Oriental pear tree. The “Kieffer” pear has a pleasant aroma; it is a beautiful and graceful tree with huge white flowers, but this pear is best when cooked into preserves or pies because of its firmness. The cold hardiness and disease resistance make this pear a valuable cultivar that remains a best selling pear tree even today.

Other strains of pears developed in California were described as huge in size, with delicate colors, fragrance, and excellent quality. One of these hybrid pears measured nine inches high and weighed five pounds—a single fruit.

Burbank pointed out that the commercial trade of pear frowns upon large pears because of boxing, sorting, and shipping problems, and the average pear fruit buyer does not often preferentially buy oversize pears. The Northwestern United States produce the most commercial pears, generally because of the exceptional dessert quality of the fruit. The oldest pear market sensation is Bartlett (Williams), that grows in a group called “Winter Pears,” including other varieties. Comice, D’Anjou, Bosc, Red D’Anjou, and Concorde pears. These cultivars these cultivars have a very restricted area of successful growth, because of their fragile European pear parentage, Pyrus communis, and are not recommended for growing in most United States regions.

The pear tree is unique as a non-shriveling fruit being easily recognizable from its normal description referring to the shape of the fruit, “pear shaped,” a specific form that everyone understands. Buyers of pear fruit are very biased in purchasing a pear in the shape they are accustomed to, and they will often reject the Asian pear, ‘Pyrus pyrifolia, a round or apple shaped fruit. The texture of pears is unique among fruits along with aroma, taste and the idea that pears (European clones) should be picked off the tree to ripen later; whereas, the Asian pears are better left on the trees to ripen for full flavor development. The skin of pears grow in a broad array of colors, green, yellow, orange, red, and mottled, and this makes a great protective shield from the eyes of birds and other animals. Pear trees require longer periods of maturity to begin fruiting than most other fruit trees, but the tree will bear earlier if grafted on a dwarfing quince rootstock; however, most tree merchants offer semi-dwarf trees for sale, and of course, larger trees begin fruiting earlier than small trees. Asian pear trees produce fruit sooner than those trees with European pear ancestry. One factor that has delayed the spread of pear trees since antiquity is the fact that the seeds show poor germination success unless they are moist and most travelers on the ancient “Silk Road” trading routes dried the seed for selling or exchanging.

Fruit buyers of America have shown a dramatic and increased interest in purchasing fresh pears at the grocery store in the past 25 years. The USDA resources state that the per capita consumption of table quality, fresh pears has increased more than most fruits, while the buying of fresh peaches has decreased. Fresh pears can be kept at near freezing temperatures for as long as 5 months for consumer buying later. For backyard gardeners, pear trees can grow 20-30 feet on semi-dwarf rootstock and are well adapted for growing on most soils, even poorly drained soils, preferentially on a pH range of 6 to 7. Pear trees will grow and tolerate temperatures of negative 20 degrees Fahrenheit.

Burbank performed many odd crosses with pear trees. He crossed pears with apples and quince; however, those hybrid trees did not grow to produce acceptable fruit.

Pear fruits contain antioxidants and no fat, with health benefits from Vitamin A, Vitamin B1, Vitamin B2, Vitamin C, niacin, and the minerals Calcium, Phosphorus, Iron, and Potassium.