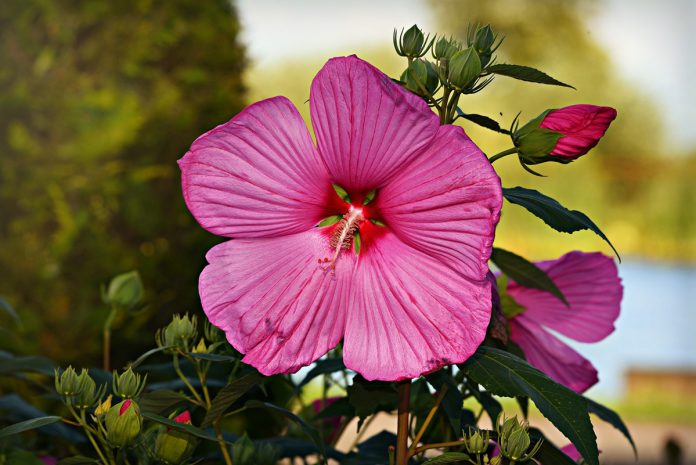 Well drained soil, full sun. Succeeds in most soils. Poor soils should be enriched with organic matter. Prefers a heavy rich soil and a sheltered sunny position. Plants are hardy to about -15—c. A very ornamental plant, it is usually grown as a biennial due to its susceptability to the fungal disease ‘rust’. There are many named varieties. Young plants, and also the young growth in spring, are very attractive to slugs.

Seed – sow April/May or August/September in pots. The seed usually germinates in about 2 – 3 weeks at 20—c. When large enough to handle, prick the seedlings out into individual pots and plant them out in the summer.

Division after flowering. Only use rust-free specimens. Root cuttings in December. Basal cuttings at almost any time of year.

Young leaves – raw or cooked. A mild flavour, but the texture leaves something to be desired. They have been used as a pot-herb, though they are not particularly palatable. They can also be chopped up finely and added to salads.
Inner portion of young stems – raw.
Flower petals and flower buds – raw. Added to salads.
A nutritious starch is obtained from the root.
A refreshing tea is made from the flower petals.

Anti inflammatory; Astringent; Demulcent; Diuretic; Emollient; Febrifuge. The flowers are demulcent, diuretic and emollient. They are useful in the treatment of chest complaints, and a decoction is used to improve blood circulation, for the treatment of constipation, dysmenorrhoea, haemorrhage etc. The flowers are harvested when they are open and are dried for later use.

The shoots are used to ease a difficult labour. The root is astringent and demulcent. It is crushed and applied as a poultice to ulcers. Internally, it is used in the treatment of dysentry. The roots and the flowers are used in Tibetan medicine, where they are said to have a sweet, acrid taste and a neutral potency. They are used in the treatment of inflammations of the kidneys/womb, vaginal/seminal discharge, and the roots on their own are used to treat loss of appetite.

The seed is demulcent, diureti and febrifuge.

A fibre obtained from the stems is used in paper making. The fibres are about 1.9mm long. The stems are harvested in late summer, the leaves are removed and the stems are steamed until the fibres can be removed. The fibres are cooked with lye for 2 hours and then ball milled for 3 hours or pounded with mallets. The paper is light tan in colour.

The flowers are an alternative ingredient of ‘Quick Return’ herbal compost activator. This is a dried and powdered mixture of several herbs that can be added to a compost heap in order to speed up bacterial activity and thus shorten the time needed to make the compost. The seed contains 12% of a drying oil.

The red anthocyanin constituent of the flowers is used as a litmus. A brown dye is obtained from the petals.

Plants for a Future