Who doesn’t like a nice warm, sweet cinnamon roll fresh from the oven? I do with a cold glass of milk. Even though I don’t consider myself a baker, every once in a while, I like to go in the kitchen and bake some sweet treats for me and my daughter. I recently decided I would try making some cinnamon rolls. I made some changes to this recipe since I only had limited ingredients in my kitchen and found that the recipe still came out great. So here’s my version of homemade cinnamon rolls.

Grab two mixing bowls. The first put the warm water in and add the yeast packet. Set aside and grab the other mixing bowl.

I put the milk in the microwave and heat it until it’s hot. Then add the hot milk, egg, 1/2 stick of melted butter and sugar and mix well.

Add in the bread flour and all-purpose flour to yeast water then add the ingredients to both mixing bowls together.

Mix the sugar mixture in with the dough.

Lightly flour a surface so you can knead your dough. Knead the dough for about five minutes then butter the inside of a mixing bowl well and add the dough. Cover and let rise for an hour. I put mine in the refrigerator or you can leave it on the countertop.

After the dough is twice in size, take the dough out and back on a lightly floured surface. I cut the dough in half. I save the rest of the dough for later use.

Take the other half and roll out flat like a rectangle.

Melt 1/2 stick butter and spread over the dough evenly.

In a bowl mix 1/2 cup brown sugar, raisins, and cinnamon together and spread all over the buttered dough.

Now roll the long side of the rectangle towards you as tightly as possible. Pinch together edges to seal.

Cut the roll into 6 slices.

Grab a baking pan and butter well then add the cinnamon rounds to the pan. My oven is electric, so it only takes about 20 minutes to bake. Bake for 30 minutes or until golden brown. Remove from oven and let cool before glazing.

I put the milk in the saucepan and added all the ingredients. Stir the mixture until it is smooth. I put the glaze in the fridge so it can thicken and drizzle over the cooled rolls when they come out of the oven.

Hi my name is Natasha Carmon. I love to create, sing, cook, and play with my daughter who keeps my existence going. 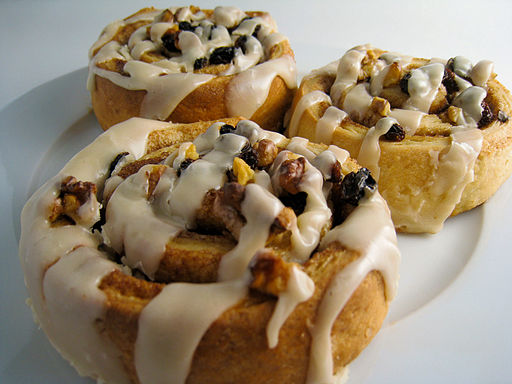