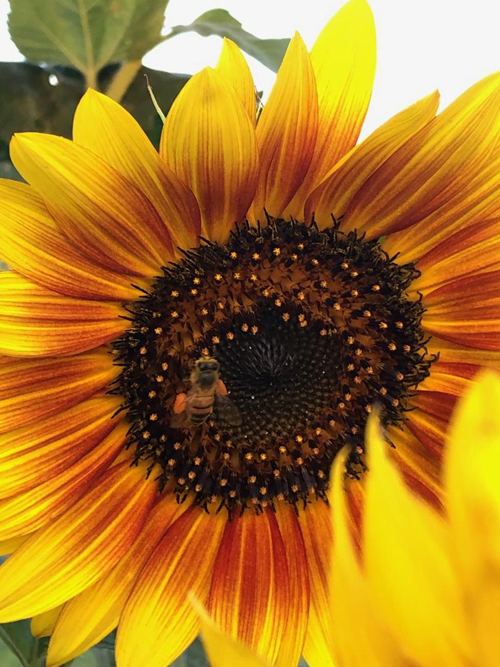 This year we planted several different varieties of sunflowers. The colors were just amazing, from an almost neon yellow to a deep autumn red. One thing they all had in common though, was the bees loved them. Earlier in the season the spring flowers didn’t seem to be attracting them and we thought maybe the bees were being affected by the colony collapse disorder that has plagued the rest of the country.

» The seeds and the roasted seed shells have been used as a coffee substitute.

If you haven’t heard bee populations have declined dramatically over the years. Bees are the primary pollinator of all fruit and vegetables worldwide, so this is a very serious problem. Possible reasons for the decline range from parasites, pesticides, genetically modified plants that are pest resistant, to cell phone towers. What is odd, is the bees are not dying in the hive, but the worker bees that leave the hive to pollinate and collect honey never come back. This makes it harder to determine what the problem is because they don’t have the dead bees to test to determine the cause. The possibility of cell phone towers being the culprit, was suggested as the reason the bees could not find there way back to the hive. Maybe the frequency was interfering with there ability to sense direction.

According to an analysis by Beyond Pesticides, the study found 121 different types of pesticides in 887 samples from bee hives in 23 states. This in itself is another reason to eat organic food. If it’s being brought back to the hive, it must be on or in the foods we eat as well.

The Diverse Uses for Sunflowers

We have decided to try our hand at some back yard beekeeping. By next spring we should have our first hive set up and ready for it’s first batch of bees. Along with an even bigger display of sunflowers that we know they love so much. We don’t use any chemicals of any kind in our garden, so if they eat local like we try to, we should have some healthy bees.

The sunflower belongs to the daisy family.

Wyman Burnham is a long time country boy, married to a beautiful city girl and father of five. He is passionate about the country life, and writes about a better way of living. you can read his blog at [http://www.wymansmind.com]