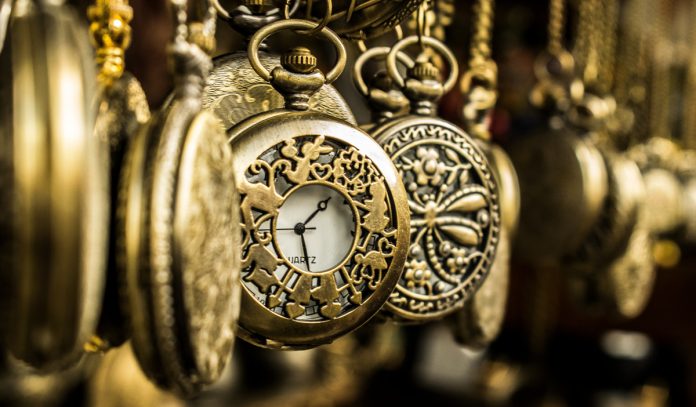 How did settlers in the Old West really know what time it was? Did they keep close track of the hours and minutes? And whose “time” was considered the “right” time in the many small towns and farms spread across the American West?

Industrial nations rely on keeping track of time and doing it accurately. Today’s atomic clocks that track time in millionths of seconds are testimony to that. Even today’s cheap wristwatches available at local “Big Box” stores are accurate to within a few seconds a year. But have you ever wondered how someone living in Wyoming, Nebraska, California, or Colorado would have known what time it was in 1855?

Certainly clocks and watches were readily available to most Westerners. Clocks which would be recognizable to modern people had been around for several centuries before 1855. People living then anywhere in the U.S. would have had timepieces, probably windup pocket watches to take time with them and long case pendulum clocks in their homes.

So the question was — who kept the “master timepiece,” who knew what the local time was. And, very importantly, what “time zone” was a given town or farm located in during the 1850s in the West? How did people keep such matters straight.

If you guessed that timekeeping and such things as time zones were in great disarray early in the period we think of as the “Old West,” you guessed correctly. Time keeping and such things as time zones were pretty casual. In a fascinating book about everyday life in the Old West written by a British author in the 1950s, “The Look of the Old West,” time zones really never came into existence in the East or the West until the railroads grew in influence, spread across the nation and worked to standardize time. In fact, according to that British writer William Foster-Harris, the nation ran on agreed upon local time until railroad influence finally standardized time zones in 1883. The federal government approved their time zone set up soon after.

But back in our 1855 scenario, local time was generally based on marking “high noon,” the time when the sun was directly overhead and cast either no shadow or the shortest observed shadow of the day. Some communities marked high noon by dropping a large ball from a clock tower, or firing a canon, or sometimes having a tower clock centrally located chime the occasion with a loud bell. Individuals with clocks in their homes or pocket watches set their time accordingly. And, in many towns throughout the West there was a local jeweler who would be happy to set your watch for you.

Time zones were so unorganized in the 1850s, however, that a trip out of town meant changing your time about a minute for each nine or 10 miles east or west.

For better or worse, the railroads settled and shaped the West in multitudes of ways — even down to creating time zones, thus making sure everyone knew what time it was.

Find out more about Old West timekeeping and other fun information about life in the Old West at my website, located at.