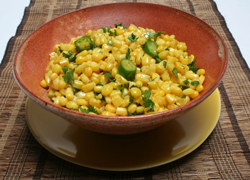 Every summer, I get drawn into the same corn-centric debates. Should the ears be boiled or tossed into just enough water to steam them? How long should cobs cook? Personally, since I often munch on a raw ear while driving back from the farm stand, I prefer steaming corn for three minutes, just long enough to warm its kernels but not cook them. Most of my friends steam for about five minutes, until the corn is tender-crisp. Although some folks still swear by it, no one I know likes their corn cobs boiled, and not just because waiting for a big pot of water to heat up takes so long. In our opinion, boiling can leave the kernels tasting watery.

Discussion inevitably moves on to how to season fresh corn. This debate used to center on the best way to butter an ear, either by twirling the hot corn on top of a stick of ice-cold butter or by brushing melted butter over it. Now that most of my friends have given up butter and cut back on fat, our choices are more diverse. Many of us are corn nudists, finding the juicy pop of corn kernels most enjoyable when there is nothing on the corn at all. At the other extreme, one friend slathers a mixture of minced jalapeño pepper and low-fat sour cream on his corn. His wife, watching her fat intake, squeezes a wedge of lime over each ear then sprinkles it with pinches of ground cumin and coarse, crunchy sea salt crystals.

Whatever the seasoning, I have always stuck to eating my corn on the cob because I never enjoyed the mess of cutting kernels off the ear. That changed this year, thanks to a guest from India who reminisced about his grandmother stir-frying corn with mustard seeds, hot chile pepper and turmeric. Because the corn was mostly grown for animal feed, he recalled, it was too tough to eat on the cob. We insisted he make it for us and this is what he improvised.

This golden corn with spicy flavor is delicious and well suited, I think, to the large kernels from the corn on the cob now sold year-round at the supermarket or even to using frozen kernels. It is a perfect way to enjoy corn now and through the coming winter.

Slice the corn kernels off the cob; there should be about 3 cups. Set aside.

In a heavy skillet, heat the oil over medium-high heat until it shimmers. Add the mustard seeds and shake the pan occasionally. When the seeds start to pop, cover the pan until they stop. If necessary, reduce the heat to avoid burning. When the seeds stop sputtering, mix in the chile pepper. Add the turmeric, stirring to dissolve it in the oil.

Add the corn, mixing to coat it with the oil. Cover, reduce the heat to medium-low, and cook until the corn is tender-crisp, 6-8 minutes, stirring it 3 times. Remove from heat and season to taste with salt and pepper. Mix in the lime juice and cilantro. Serve hot, warm or at room temperature.