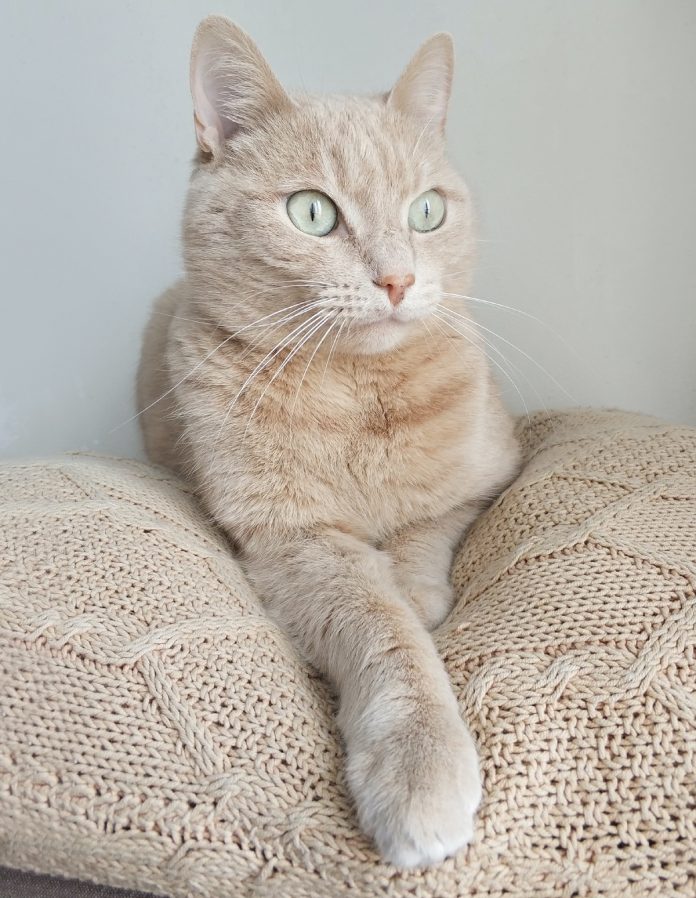 Trimming your cat’s nails is a great way to:

Additionally, as cats age, the outer sheaths of their nails don’t loosen and shed as effectively as they do when they’re young (those little translucent bits cat claw that you find sporadically around your home).

Older cats frequently suffer from ingrown claws if they’re not trimmed – the claws become overgrown, start to curl under, and will pierce right through their digital pads and paws. Older cats need their nails trimmed!

Nail trimming may seem like a daunting task, and indeed it may never be a procedure that your cat will relish, but nonetheless it’s quite feasible with some practice and a little training. Unless your cat goes outdoors and requires their claws for self defense, it truly is best to keep your cat’s claws trimmed at a moderate length.

When possible, training your cat to tolerate ‘pet’-icures should be done starting from kittenhood. However, even if you adopt your cat at a more mature age, it’s still possible to train your cat to better tolerate manipulation of their paws. The more practice you get at trimming your cat’s claws, the easier it will become. So have patience, and remember that practice will make perfect. As you become more proficient at this task, the event will become less stressful for your cat. The less stressful nail trimming becomes, the less they’ll protest and, as a result, it will become even easier to accomplish.

Start training your cat to accept having their paws handled and manipulated one or two weeks before you actually trim their claws.

While cuddling and stroking your cat, begin to touch their paws, including both the digital pads and the nails, and occasionally unsheathe the claws.

When your cat doesn’t resist the paw manipulation, praise them and reward generously with treats!

Practice this every day with all four paws, and once your cat is relatively comfortable with having their paws touched, then attempt the first actual nail trim.

It’s important to know that frequently ‘less is more’ with cats when it comes to restraint.

Many owners are (understandably) anxious about restraining their cats and about ensuring that they can’t get away from them while they are trimming their claws. However, when less restraint is used, cats are less likely to wish to escape.

One method of restraining your cat effectively and in a manner that doesn’t increase their stress levels, is by making a ‘kitty burrito.’ (Ultimately, it’s best if minimal restraint is used, but during the learning curve, it’s acceptable to ensure that your cat cannot escape from you and further complicate the process.)

A ‘kitty burrito’ is made by placing a towel on the floor, placing your cat on the towel in a lying down position, and then wrapping the towel around your cat like a present, or a burrito. Then you can sit with your cat parcel on the floor between your knees or in your lap!

Remove one paw at a time from the burrito for nail trimming.

This can be done while your cat is on a table or on the floor, but generally speaking it’s much easier to accomplish the nail trim when sitting on the floor with your cat.

Drape your arms over either side of your cat’s chest in order to prevent them from running away. Your cat is facing away from you so they’ll be unable to back away (because they will back into you).

This position means that your cat can neither run forward nor backward, and it allows you to easily manipulate their front paws.

When you are trimming your cat’s left hind paw claws, turn your kitty slightly so that they are oriented to the right.

it is easiest to keep your right arm draped across your cat’s neck and side of their chest (left) that is facing away from your body, and the clippers in your right hand.

Your left arm should be draped across the hind end of your cat, the side of your cat (left) which is facing away from you, and the (left) hind paw grasped in your left hand.

Since your right hand will be holding the clippers and doing the nail trimming, you will have to extend your left arm further across your cat’s body so that you can grasp the left rear paw with your left hand.

Some cats need almost no restraint whatsoever for the ‘pet’-icure procedure, but for many kitties having their nails trimmed is objectionable, and not the equivalent of a relaxing human pedicure!

There are three main types of nail trimmers:

Human fingernail clippers are often the easiest type of nail trimmers to used in cats.

Where to Trim The Claws

In order to clip your cat’s claws you gently squeeze each toe between your thumb and forefinger to unsheathe the claws.

You’ll notice that your cat’s claws are likely clear in color – this is a very handy characteristic of most cats’ claws, because you can easily observe the “quick,” or the pink, vascular, and innervated portions of the claws.

Some cats do have darker (black) colored claws, which does make it more difficult to know where to trim… it’s always best to err on the side of caution when it comes to dark claws and position the clippers conservatively!

Clip your cat’s nails approximately 2 mm away from the quick.

If you accidentally clip your cat’s nail at the quick, it will be painful and will bleed, which may cause your cat to be more averse to having their nails trimmed again in the future.

Fortunately, there is no reason to panic about the bleeding; the bleeding will stop on its own in about five minutes, or, if you have silver nitrate (styptic) pencils or powder handy you can stop the bleeding by rubbing the tip of the pencil on the end of the bleeding claw.

However, styptic pencils/powder can cause a stinging sensation while being applied so many cats object to it’s use.

When positioning the clippers to cut claws, the cutting action should occur from the sides of the claws.

The cutting shouldn’t occur on the top and bottom of the claws because this crushes the claws, which makes trimming them more uncomfortable because they can splinter painfully.

If using human nail clippers the two blades should be gripping the sides of the claws.

If using scissor type trimmers, the same principle applies – the blades should be positioned on the sides of the nails.

If using guillotine type trimmers, the blade should be facing you, rather than your cat.

The screws on the trimmer should be facing your cat.

If this position is reversed, and the cutting blade is facing your cat, you may accidentally cut through the quick.

The claw tip should be placed into the hole of the guillotine and the handles of the trimmers can be facing downward or upward toward the ceiling, whichever position is most comfortable for you. To then cut the claws, squeeze the handles together and this action causes the blade to advance through the claws.

Don’t forget the dewclaws when trimming your cat’s nails!

Dewclaws are your cat’s vestigial ‘thumbs’ and are located on the inside aspect of each front limb, just a couple centimeters up from their paws.

Dewclaws don’t get worn down with usage like your cat’s other claws do, so if neglected dewclaws easily become ingrown – they start to curl under, growing around in a circular shape, and then they proceed to pierce right through their legs, causing severe pain and infection.

Cats do not have dewclaws on their hind limbs.

Don’t forget to trim all extra claws if your cat is a polydactyl!

Extra claws are particularly difficult to trim, and you may want to bring your cat to your veterinarian so that you don’t risk accidentally cutting your cat while attempting to trim them.

However, if you feel comfortable trimming your cat’s extra nails, and have the technique mastered, then continue to do so – trimming these extra claws is very important since like the dewclaws, they can easily become overgrown and start growing into your cat’s paw.

Hind paw claws generally do not need to be trimmed as frequently as front paw claws. Similarly to our own toe nails, they don’t seem to grow as fast, and they also get ground down more than front claws from regular daily activities.

Don’t forget to have lots of treats beside you for when the ‘pet’-icure is finished! Lots of praise and positive attention will help to enforce that cooperating with the nail trimming process will pay off in the form of goodies and TLC!

Like anything else, the more practiced you become, the easier the claw trimming will be, and the fewer objections your cat will make.

If you have any concerns or feel that your technique needs more refinement, look at our practice video and then try again when you and your kitty are relaxed.

The information provided in this article is for educational reference purposes only. It is not intended to be a substitute for the advice and care of your veterinarian, nor medical diagnoses or treatments. All questions regarding your cat’s health should be discussed with your veterinarian.