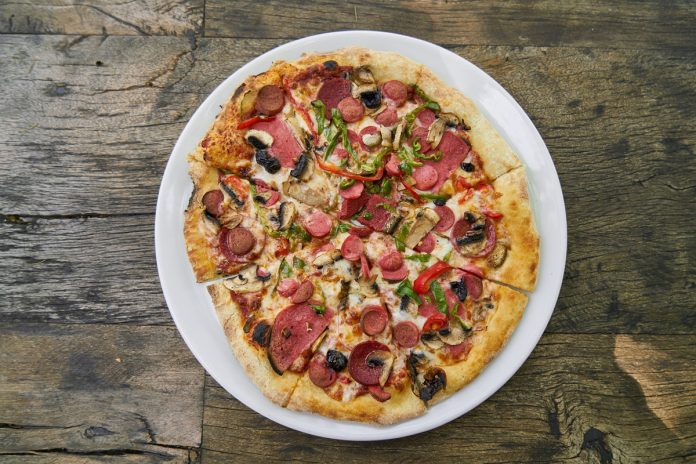 Pizza is one of the most popular dishes around the world. It is generally a flat round bread which is oven-baked and covered with tomatoes or a tomato-based sauce and mozzarella cheese. Toppings are also added depending on the region, culture or personal preference. In this article, we will be learning how to make a pizza at home.

The basic steps in pizza making are first preparing dough, then pizza sauce. After that, cheese and toppings are added according to taste and then the pizza is baked in an oven. This seems to be simple while reading but preparing a good mouth watering pizza at home drains in a lot of hard work. However, you will be able to make pizza at home easily using this step-by-step guide.

Let’s start from the scratch.

Dough making has been known to humans since ages now, but mastering the art to make perfect pizza dough can be a bit cumbersome sometimes. At home, Pizza dough is prepared by hands, no special machinery is required. However to prepare hand-made dough you will need to have a large mixing bowl, a measuring cup, measuring spoons, a large whisk or wooden mixing spoon and some kitchen film before you start. It will be better if you also keep a small hand towel ready before starting the process.

Pour the warm water in a large mixing bowl, then add the sugar and dissolve it. Next, dissolve the yeast by stirring continuously after addition. Allow the mixture to settle down for 10 minutes or extra so that the yeast becomes active.

Now add the yeast and olive oil, when the appearance of the mixture becomes foamy and cloudy at the surface. Dissolve it continuous stirring. Then add 3 cups of flour to the mixture one-by-one and whisk in until dissolved completely. Make sure the mixture is completely smooth. Use your hands to combine the dough until all of the dry flour has moistened into a mass.

When the flour has absorbed all of the moisture and congealed into a firm mass, remove it from the bowl to a floured tabletop to knead it. Fold it in half again and push it into itself, again and again for perhaps 10 to 12 minutes or so, or about 200 cycles. It is very important that the dough is very well kneaded.

After kneading is complete, when dough transforms into a silky, smoothly-textured ball, coat the dough ball with a thin layer of olive oil. After that place it in the bottom of a large mixing bowl that has also been coated on the inside with olive oil.

Now comes the step on panning the prepared pizza dough. One of the most demanding of the pizza maker’s many challenges is getting the raw pizza dough ball into a pizza pan. The panning of pizza can be done by various methods as per your convenience. The popular methods are Pizza dough sheeting, pizza dough pressing, hand tossing pizza dough- do it only if you don’t get hazy when catching, hand pressing pizza dough, and last is pin rolling pizza dough.

Normally at home, we recommend using tomato sauce only which is lightly herbed with oregano and basil. Some pizza lovers prefer to have even simpler sauce than this, however tomato sauce is the simplest to prepare at home.

Melt the butter with olive oil in an oven or large skillet. Now slowly but completely sauté the garlic and onion. Then add the tomatoes, salt, pepper, oregano, basil and puree. Boil it.

Cover the mixture and let it bubble for two hours. In between, stir it occasionally. Crush the tomatoes with the masher. Continue the process till the sauce reaches the consistency of a soup.

Set the sauce aside to cool before applying it to your pizza dough, or, or refrigerate it for use in the future.

Now create a layer of the shredded cheese over the sauce. Shred about two cups of cheese. Arrange your toppings over this layer of cheese.

Add toppings according to your preference.

Preheat your oven up-to the temperature of 450° F for about 10 to 15 minutes. When preheating is done, place a prepped pizza in the oven at the centre. Place the pan in the oven such as there is maximum circulation of air around the pan. The baking will take about 10-15 minutes at that temperature.

Signs to look for that the pizza is ready are:

1) The cheese has melted on top and is beginning to brown.
2) The crust edge has browned, from a medium to a golden brown.
3) Now carefully lift the edge of the pizza to inspect its bottom, it should be evenly brown.

If these signs are evident, your pizza’s done! Thus, now you are ready to throw regular pizza parties of your home-made pizza to friends and family.